Revital 8 Antioxidant Review – Is it Effective?

Fusion Health is an Australian-based business based in Byron Bay. The manufacturing facilities are located in Sydney, Australia and comply with the guidelines set forth by the Australian Therapeutic Goods Administration (TGA). The company’s formulas are obtained by integrating western and Chinese medicinal principles, in order to obtain scientifically validated products. In addition, the company products are regularly tested (at each stage of the manufacturing process), a measure designed to ensure high-quality and potency of the finished medicines. According to the manufacturer, the great majority of their formulas are free of artificial colors, flavors, preservatives, yeast, gluten, wheat, dairy, nuts and animal products.

Revital 8 Antioxidant is designed to be used by adults, except for pregnant women. Children under the age of 12 should always consult a healthcare provider before use.

1) What is Revital 8 Antioxidant?

Revital 8 Antioxidant is a mixture of herbal extracts, free of most common allergens, colors, flavors and preservatives.

Turmeric, known as an Asian and Indian cuisine spice, has long been discovered to have medicinal properties, mainly attributed to its antioxidant and anti-inflammatory properties. Frequently used in Ayurvedic medicine, Turmeric has many health-enhancing properties adopted and promoted in the Western medicine as well. Curcumin is the active ingredient of Turmeric, which is held responsible for its numerous properties. Turmeric has been prescribed as a treatment or preventive remedy against diseases such as colitis, stomach ulcers, infections of the respiratory ways, rheumatoid arthritis, osteoarthritis, high cholesterol, Alzheimer’s, mild cognitive impairment, heart failure, headaches, and even some forms of cancer. In addition, several research studies indicate it might help alleviate symptoms of depression and boost mood.

Another important ingredient of Revital 8 Antioxidant is Milk Thistle, an herb touted for regenerative and antioxidant effects. It is generally mentioned as a liver tonic, helping repair damaged liver cells and generate new ones. Milk Thistle is also able to fight high cholesterol and atherosclerosis, although research is rather limited or evidence is incomplete.

You can also find Milk Thistle in health supplements like UltraNutrient.

3) Is Revital 8 Antioxidant Right for You?

Revital 8 Antioxidant is a combination of herbs that are used traditionally for their health-sustaining qualities.

If well-calibrated, this formula has the potential to meet all the manufacturer’s claims. In some parts of the world, these herbs are used for their healing properties for hundreds of years. Recently, they have been included in dietary supplements for the purpose of curing or alleviating the symptoms of certain diseases. Although we cannot know if this is the case with this particular formula, some herbal extracts can lose some of their healing properties when they are included in dietary supplements.

Japanese Knotweed is a powerful antioxidant and may also have laxative effects. Grape Seed extracts are very popular in both alternative and modern medicine. They are also powerful antioxidants (grape seeds contain OPCs, which are said to be several times more potent antioxidants than Vitamin C or Vitamin E) and may support the cardiovascular system and the immune system. Milk Thistle is one of the most commonly used medicinal plants in the world. Several scientific studies confirmed that this plant could adequately sustain liver health, protecting it from the effects of toxins such as alcohol, pollutants, etc. Finally, Green Tea has been proven to aid the immune system and promote weight loss.

The recommended dosage for Revital 8 Antioxidant is one tablet daily.

All Fusion Health products are expensive. Revital 8 Antioxidant is no exception. Each bottle contains 50 tablets which should be enough for 50 days of treatment.

This product can be purchased directly from the manufacturer or other online or offline retailers. The price usually varies between them but only by a small margin. Discounts and money-back guarantees may be offered.

7) How to Take Revital 8 Antioxidant

The recommended dosage is 1 tablet daily. The manufacturer warns that if symptoms persist, a healthcare professional should be consulted.

Antioxidants are molecules that inhibit the oxidation of other molecules in the body. Oxidation may have serious damaging effects on numerous body function, processes and systems, including the cardiovascular system and the neurological function. Revital 8 Antioxidant is a dietary supplement which contains several herbal extracts known as powerful antioxidants (Turmeric, Milk Thistle, Green, Black Pepper, and others), which have been medically used as such for decades. There are no consumer testimonials posted online referencing this product which makes it very difficult for us to evaluate its effectiveness, potential interactions, and side effects. You should remember though that this is an herbal formulation, and potential side effects are fairly limited. 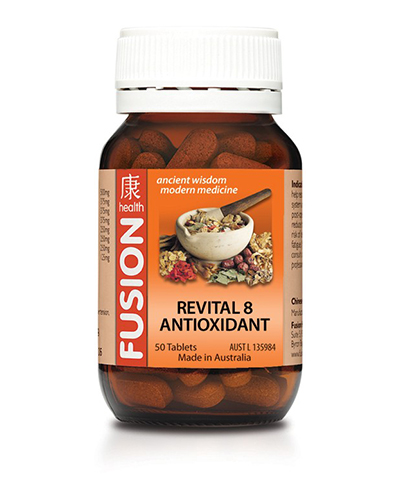 clear
Q:
What are the active ingredients in Revital 8 Antioxidant?
A:

Q:
What is Revital 8 Antioxidant supplement?
A:

Revital 8 Antioxidant is an herbal mixture of eight extracts designed to provide antioxidant support and to assist with the following health issues: maintain the health of the skin, liver, eyes and digestive tract, promote cardiovascular support, reduce cholesterol, neutralize free radicals, regulate cell function and reduce inflammation. The manufacturing company is called Fusion Health., The core ingredients of the product are Turmeric, Green Tea, Milk Thistle, Black Pepper, Grape Seed and Japanese Knotweed. Revital 8 Antioxidant should not be used by pregnant women and children under 12 without prior doctor consent.

This formula appears to be based on legitimate science, as most of these herbal extracts have been scientifically proven to be beneficial to the human body. Not only can Revital 8 Antioxidant prevent cellular damage due to free radicals, but can also support the cardiovascular and immune systems, promote weight loss and protect the liver. As it contains only herbal extracts, it should be much safer to use than other similar products.

People should always investigate each formula and determine if it is the right choice for them.

A bit pricey, but a good product overall!

Really great blend of antioxidants! My mind is clearer; I have more energy and feel better altogether ever since taking it.

Well it works for me. I used to be plagued by 2 or 3 colds a year. Now I might get one tiny little bug I hardly notice in the middle of winter. I don’t bother with Vit C, garlic, horseradish etc. This one’s all you need!

Before they changed the formula and increased I the content of green tea extract I loved it. I find it too strong and I even get nausea if I have not eaten a decent breakfast….I am having a break after reading liver damage can occur by Green tea extracts supplements.