Razadyne ER is a prescription drug known as acetylcholinesterase inhibitor (or AChEI) and is marketed as a treatment for mild to moderate symptoms associated to Alzheimer’s disease (memory loss for instance). While the exact way the drug works is not known, experts believe that it blocks an enzyme that breaks down Acetylcholine (ACh) in the brain, thus ensuring the presence of more ACh. Specialists found that patients with Alzheimer’s have low levels of ACh, chemical which helps with learning, memory and functioning skills.

Razadyne is manufactured by Janssen Pharmaceuticals (former Ortho-McNeil Neurologics), but is also available as a generic drug, since it has come off patent. The manufacturer is a US based pharmaceutical company, part of the Johnson & Johnson multinational.

The manufacturer claims clinical trials have been conducted to test the drug’s efficiency. The dosage of Razadyne ER shown to be effective in a controlled clinical trial is 16-24 mg/day.

Razadyne is available in short-acting forms (tablets and oral solution) which should be taken twice a day and in long-acting once-daily dose Razadyne ER (Extended Release) capsules.

Before starting treatment, a thorough doctor’s evaluation is recommended. Precautions include, but are not limited to patients with hepatic or renal impairment.

According to the producing company, in a 6-month clinical trial, comparing Razadyne ER to placebo, patients treated with this drug showed significant improvement in cognition vs. placebo.

Just like with all prescription drugs, Razadyne ER has been associated with some side effects. The most common ones include nausea, vomiting, diarrhea, anorexia, and weight loss. It is strongly recommended to consult with your doctor before using this drug.

Anyone that suffers from changes in heart rate, trouble with breathing, or a rash should notify the doctor immediately. Individuals that take NSAIDs or that have stomach ulcers shouldn’t use Razadyne ER.

5) Precautions of Razadyne Use

Compared to other similar products, Razadyne ER is a moderately priced medication. Most prescription coverage plans or health insurance programs will cover the cost of treatment with Razadyne ER.

Never purchase this product from questionable sources. Never buy and take Razadyne ER is you don’t have a doctor’s written consent for that.

The manufacturer claims the medication should be used regularly in order to get the most benefit from it. Dosage increase or decrease, as well as interrupting treatment should only be done under doctor’s instructions.

8) Our Verdict on Razadyne

Razadyne ER consumer reviews are generally positive mentioning improvement in the performance of day-to-day activities. However, decreasing efficiency as the disease progresses has been reported by patients. Various side-effects ranging from mild to severe have been associated with the product.

The manufacturer mentions clinical trials which prove the drug’s efficiency in treating symptoms associated to early stages of Alzheimer’s Disease. The drug is FDA approved and is released based on a doctor’s prescription.

Although the way it works is not fully understood, specialists believe the drug works to keep up levels of a certain chemical in the brain called Acetylcholine, substance responsible for the good functioning of the memory and learning abilities. 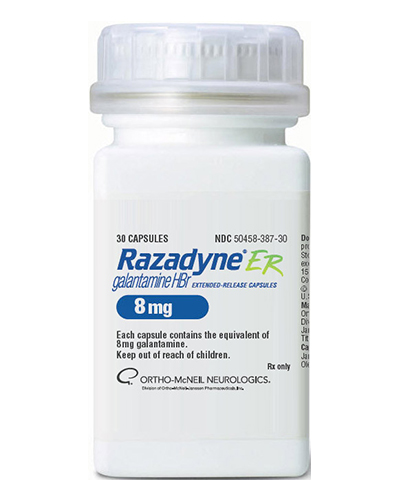 Customers Questions and Answers with Razadyne

Razadyne ER is a form of prescription medication known as acetylcholinesterase inhibitor (or AChEI), used in treating mild to moderate dementia of the Alzheimer's type. Razadyne ER is a type of acetylcholinesterase inhibitor that can help patients stay engaged by maintaining cognitive and functional abilities. Razadyne ER should only be taken as recommended by a doctor. It may present several side-effects that include nausea, vomiting, diarrhea, anorexia, and weight loss. The product is manufactured by Janssen Pharmaceuticals, Inc.

Q:
Does Razadyne work?
A:

Razadyne ER is a form of prescription medication, and in the end, your doctor is the only one entitled to decide if this drug is good for you or not.

It is important to point out that Razadyne ER has been associated with some unwanted side effects. Patients with cardiovascular, gastrointestinal or pulmonary conditions should avoid this drug.

Have Traumatic Brain Injury from a Motor Vehicle Accident,my neurologist started me on this med..it saved my life! my memory was gone and now Im regaining more each day,use the generic version,thanks!

Bad dreams, nightmares, headaches, and nausea. Feel more confused with than without.