OPC Synergy is a dietary supplement advertised to provide a synergistic blend of antioxidants designed to support cell functioning.

The formula is offered by Standard Process, an experienced manufacturer of dietary supplements, which claims the product’s core benefits include support for normal cell functioning, eye health, cardiovascular system, and the complex processes associated with aging.

The formula is said to contain Oligomeric Proanthocyanidins, one of the most potent antioxidants known today. They are claimed to be much more effective than Vitamin C and boost overall body health.

Are these claims valid? Does OPC Synergy actually work? Read this OPC Synergy Review to find out all about it.

1) OPC Synergy at a Glance

The Grape Seed Extract featured by the formula is claimed to contain OPCs, a group of substances considered one of the most potent free radical scavengers ever discovered. Extensively researched, the nutrient is now officially recognized as “Vitamin P.”

OPCs, commonly derived from a combination of red wine extract, grape seed extract, and/or pine bark extract, have been scientifically demonstrated to be 20 times more effective than Vitamin C and 50 times more effective than Vitamin E as a free radical scavenger. OPCs are shown to cross the blood-brain barrier and improve brain tissue oxygenation. They are currently researched for potential benefits in Attention Deficit Hyperactivity Disorder and Attention Deficit Disorder.

Clinical testing and scientific research in humans reveal no evidence for allergic reactions, toxicity, or carcinogenicity. OPC is 100% bioavailable in humans, remaining in the body for up to 72 hours.

2) The Company Behind OPC Synergy

Standard Process is a U.S.-based company founded more than 80 years ago.

The company manufactures and markets over 300 products including veterinary formulas, whole food supplements, and herbal supplements.

According to the company, the entire range of products is compliant with the Good Manufacturing Practice (GMP) requirements set forth by the Food and Drug Administration.

Green Tea Extract is obtained from the leaves of Camellia sinensis. It originates in China and has become associated with several cultures from Asia. According to some studies developed in the United States, the main active ingredients in green tea are flavonoids, and the concentration is higher than the same volume of other drink or food items, such as wine or vegetable juice.

Green Tea extract has a wide spectrum of medical applications. It contains caffeine, antioxidants, and polyphenols which include flavonoids. Polyphenols help with Dopamine synthesis, an important neurotransmitter that regulates mood, motivation, decision making, and attention.

Flavonoids represent a group of phytochemicals that are responsible for anticarcinogenic and antioxidant functions.

Green tea extract is believed to assist with conditions ranging from Chronic Fatigue Syndrome and Parkinson’s disease to blood pressure and certain types of cancer.

Another compound in this supplement is Bilberry, also known as Vaccinium myrtillus. As an ingredient of natural remedies, bilberry has been used as a blood strengthener and sight improver and can prove reliable in treating macular degeneration, cataracts, and diabetic retinopathy. It is regarded as likely safe when consumed in food amounts.

4) What Does OPC Synergy Do?

Providing a natural answer when it comes to treating symptoms of mental disorders or just helping with the proper development of the immune and cardiovascular system, OPC Synergy contains four herbal extracts with antioxidant properties.

5) Where to Buy OPC Synergy

You can buy OPC Synergy from various distributors accessible via the company website or online retailers like Amazon.

OPC Synergy is sold in bottles containing 40 capsules and generally costs $51.46 for 40 capsules. A bottle is usually enough for 40 days of use.

Its price may vary by retailer, but it’s considered to be moderate, especially compared to similar supplements. You may be able to purchase this product at lower prices by ordering larger amounts and combining other discounts or promotions provided by the retailer.

Take one capsule of OPC Synergy daily, or take it as directed by your physician.

OPCs have been used for several decades and have been investigated for their numerous potential benefits. They are known to be potent free radical scavengers, collagen binders, and inhibitors of histamine formation and inflammatory enzymes, to name their most essential functions.

OPC Synergy has been manufactured for more than ten years. Although the number of consumer reviews is limited, those available lead us to assume that the formula will achieve its benefits considering the manufacturer’s excellent reputation and the extended availability of the product on the market.

Nevertheless, we recommend you talk to a healthcare provider before using OPC Synergy and advise that this supplement is not intended to diagnose or cure any medical illnesses. 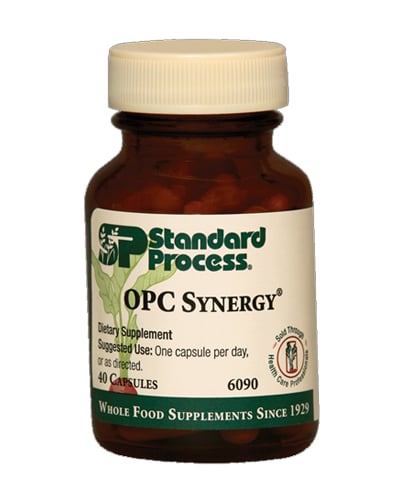 clear
Q:
What are the OPC Synergy ingredients?
A:

Q:
What is OPC Synergy supplement?
A:

OPC Synergy is advertised as a synergistic blend of herbs with antioxidant properties that help support or enhance the nervous and cardiovascular systems and maintain proper cell functioning.

Q:
Where can I buy OPC Synergy?
A:

You can buy OPC Synergy from various distributors accessible via the company website or online retailers like Amazon.

Q:
How much does OPC Synergy cost?
A:

OPC Synergy generally costs $51.46 for 40 capsules. However, the cost may vary by retailer.

Q:
What are the advantages of taking OPC Synergy?
A:

According to the manufacturer, OPC Synergy can help maintain normal cognitive function.

Q:
Are there any dangerous ingredients in OPC Synergy?
A:

There aren't any known dangerous ingredients in OPC Synergy.

Q:
How do I know if OPC Synergy is right for me?
A:

OPC Synergy is an excellent recommendation for anyone looking for an all-natural, effective supplement to boost their antioxidant levels and overall body health.

Q:
How should I take OPC Synergy
A:

Take one capsule daily, or take it as directed by your physician.

Q:
How do I contact OPC Synergy customer service?
A:

Q:
Can I return OPC Synergy?
A:

You may be able to return OPC Synergy by calling the Standard Process customer care line above and obtaining a Return Merchandise Authorization.

Q:
What do OPC Synergy reviews say?
A:

OPC Synergy has a 4.6-star average rating on Amazon. Here's what a few users have said about it

"Great supplement" - I am absolutely satisfied with quality of OPC Synergy. It works great. I feel more focused and my memory is improved since I started to take this supplement for the last 2-3 weeks. It really helps me to study for a very difficult exam. The delivery of OPC Synergy was very prompt.

"Great for ADHD" - Good for those with ADD or ADHD. My son takes this with mini-Tran, tuna omega chewable and inositol.You can tell the difference when he doesn’t take them or if you try to substitute with another brand."

"The Best" - My chiropractor recommended this product for my 11 year old son who has focus problems...I have seen such a change in him. He's more engaging and stays focus longer at complex tasks. This product works and is great.

Q:
Who makes OPC Synergy?
A:

At first I thought this product was good only for improving the sight, but man was I wrong! It helps with everything, from the heart to the lungs and the brain. It’s the best supplement I’ve ever come across in my life. Totally worth my money