Oculotrophin PMG is advertised as a homeopathic that was created to support normal cell growth and differentiation. It was introduced on the nutritional field in 1956 by a business called Standard Process.

With more than 80 years of activity on the nutritional market, the business behind this remedy was founded by Dr. Royal Lee, also known under the alias “Einstein of nutrition.” His personal nutrition philosophy, which is different from other founders, reveals the fact that he thinks the source of a component to be of more importance than the quantity of each utilized in nutritional products. Due to this, even a tiny quantity from a whole food may lead to a major difference. Standard Process states that they’re using a method of manufacturing which derives tissue cell determinant from animal organs and glands. Moreover, the calcium used in this formula comes in a lactate form and is pure-vegetable, thereby not dairy obtained.

A particular feature of their quality-control and manufacturing processes is that they kept the enzymatic vitality as well as nutritional potential of their compounds through high-vacuum and low-temperature drying techniques.Oculotrophin PMG is based on a mixture between porcine eye PMG extract, magnesium, and calcium to maintain healthy eyes and in some cases help people suffering from eye problems.

Because the tear and wear from sustained chemical activity that is caused by light processing, particularly blue and ultraviolet can cause wear to the eye, some nutritional businesses have developed some products that target eye damage avoidance. One of these is represented by Oculotrophin PMG which was offered to the every-day individual by Standard Process.

It’s a known fact that eye is composed of a series of proteins, enzymes, amino-acids, as well as vitamin and mineral complexes, and each one of them takes a part, in different concentration, in the sustenance of normal visual functioning. This sustenance of normal nutrient levels within the eye is important in keeping the eyes healthy.

Protomorphogen extract is actually the brand name of Standard Process extracts that are directly derived from molecules of nucleoprotein-mineral. The base for the functioning of these nucleoprotein-mineral extracts is obtained from reaction of antigen-antibody that usually takes place during proper cellular maintenance. These antigenic properties sustain healthy division, growth and function. When a tissues needs support, a dozen compounds are created and they may cause white blood cells to go towards the compromised area. These feature degenerative products created by tissues themselves. Due to the fact that they activate the macrophage system, after a few hours macrophages devour destroyed tissue byproducts.

3) What Does Oculotrophin PMG Do?

Because the wear and tear from sustained chemical activity which is caused by the processing of light, specifically ultraviolet and blue light which may cause damage to the eye, some nutritional companies have started developing a series of products particularly to avoid the eye damage. One of these is Oculotrophin PMG offered to the every-day person by Standard Process.

It is important to know that the eye is composed of a series of amino acids, proteins, enzymes, and mineral and vitamin complexes. Each of them contributes to different concentrations to sustain normal visual functioning. This maintenance of proper nutrient levels within the eye is mandatory for keeping the eyes healthy.

The photomorphogenic extract is, in fact, the brand name of Standard Process extracts which are derived from nucleoprotein-mineral molecules. The foundation for the functioning of these formulated nucleoprotein-mineral extracts comes from the reaction of antigen-antibody which takes place during normal cellular maintenance. These antigenic qualities promote healthy function, division, and growth. When a tissue requires support, a dozen various compounds are formed, and they can cause white blood cells to travel towards the compromised area. These include degenerative products of the tissue themselves. Because they activate the macrophage system, within a few hours macrophages, start to devour destroyed tissue byproducts.

The porcine eye PMG extract featured in Oculotrophin PMG apparently manages to neutralize the circulating antibodies, thus contributing to the maintenance of cellular health. Because of this, people with eye problems like conjunctivitis, glaucoma, or ocular hypertension may benefit from this treatment.

There are online consumer testimonials about Oculotrophin PMG. What is being reported includes the following:

Standard Process Ocultrophin PMG is distributed in the form of tablets. Each contains approximately 2% of calcium and sodium required on a daily basis. The suggested daily dosage is one tablet per meal; because a bottle has 90 tablets, it is enough to last thirty days of treatment. People from outside the United States can’t purchase the product directly from manufacturer website because they have no international shipment policy. Thus they have to seek for it on other online or local suppliers. Overall, it is considered as an affordable supplement, especially in comparison with similar others.

The porcine eye PMG extract contained by Oculotrophin PMG manages to neutralize the antibodies, thus taking a part in maintenance of cellular health. Due to this, people that have eye problems such as conjunctivitis, ocular hypertension or glaucoma can benefit from this treatment.

8) Our Verdict on Oculotrophin PMG

Overall, Oculotrophin PMG is advertised as a remedy that was designed to help people who have eye problems such as ocular hypertension, glaucoma, or conjunctivitis by covering the nutritional gap. On the other hand, it doesn’t actually work for those who already have healthy eyes in the sense that they won’t to observe a notable difference. Despite the fact that there is no potential side-effect stated by Standard Process, there can be some that may appear during the treatment and to avoid it, it is recommended to be careful with the label dosages. A negative aspect of Oculotrophin PMG is the fact that vegetarians and vegans can’t take it because it contains animal traces that may cause harm. 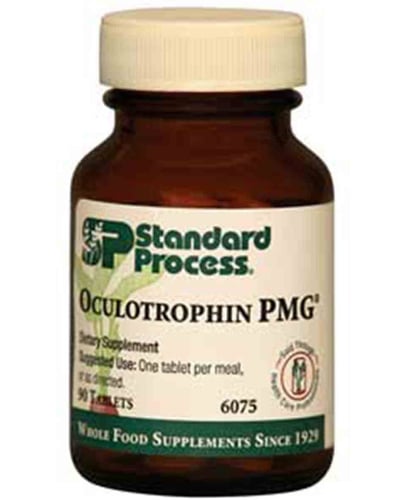 clear
Q:
What are the active ingrediens in Oculotrophin PMG?
A:

Q:
What is Oculotrophin PMG?
A:

Oculotrophin PMG is promoted as a remedy that focuses on enhancing the health of the eyes, particularly for people who are suffering from eye problems such as conjunctivitis or glaucoma, case in which the product may alleviate the symptoms. It was introduced on the nutritional market in 1956 by a company called Standard Process. It bases its positive effects on a combination between some minerals and porcine extract.

All in all, Oculotrophin PMG is promoted as a dietary supplement which was created to help people that have eye problems like glaucoma, ocular hypertension or conjunctivitis by fulfilling the nutritional needs. However, it may not work for those who are already healthy, in the sense that they won't be able to notice a considerable difference. Although there is no side-effect mentioned by Standard Process, there may be some that can occur during the treatment, and to avoid it, it is advised to follow the label dosages properly. Unfortunately, vegetarians and vegans can't take this supplement because it features animal traces that may harm them.

Has anyone noticed improvement in dry macula degeneration? Thankyou

Title for your comment
Macula degeneration
Have you tried this product?
Yes
Reply
John S. Wagner

Can’t tell if my eyes got better, but I think I am seeing clearer since I’ve started taking this supplement.

If you need this type of supplement, you will feel the results. If you don’t, they are still good maintenance.