Unlike other supplements that target memory and concentration enhancement, Neuron Growth Factors seeks to affect the source of the problem which, more often than not is the miscommunication between brain cells. The manufacturer presents it as a formula that enhances brain function by improving the quality of the neurites, also known as axons and dendrites, which are generally damaged by aging processes and may result in certain mental problems.

The business that launched the product and which is still producing it is called Vitamin Research Products. The company was built in the year 1979 and is currently headquartered in Carson City, Nevada. The manufacturers claim that their mission is to help individuals maintain a healthy lifestyle. one of the many ways the company strives to achieve its mission is through their monthly newsletter. The informative purpose of this newsletter is to provide information to the regular customer about the things they should eat do so that a stressful life is avoided and the individual can live happy and healthy for as much as possible.

Unfortunately, the manufacturer’s official website was down while this particular review was drafted. This product is based on a formula that contains amino-acids and herbal extracts. While it’s not an unusual combination, the inclusion of Acetyl-L-Carnitine clearly points out to the type of supplement that this is.

Neuron Growth Factorsis recommended by the manufacturer particularly for people who start to experience mental issues due to aging.

1) Neuron Growth Factors at a Glance

Neuron Growth Factors focuses on enhancing one’ cognitive abilities such as concentration, memory, and thinking and learning abilities.

Alongside its main ingredient which is Acetyl-L-Carnitine, two other herbal extracts are found in this formula. These are Ginkgo Biloba and Gotu Kola. The Ginkgo Biloba used is standardized at 24% ginkgoflavonglycosides as it is in the majority of supplements that target mood and memory enhancement. The active components of this herbal extract have shown to reduce oxidative damage in older individuals. Additionally, they promote a healthy blood circulation in the brain. However, when its consumption isn’t done according to the recommendation, certain side-effects like headaches, stomach upset, constipation and dizziness may occur.

Gotu Kola is the second herb included in this formula. The reason behind the popularity of this herb relies on the content of asiaticosides. Studies show that these active principles have proven positive in older animals because they stimulate axion-dendrite growth. Furthermore, extracts from this plant have been used in brain tonics from ancient times in regions like China and India.

If you prefer a more complex formula with uridine, we recommend checking our truBrain review.

3) Is Neuron Growth Factors Right for You?

Presented as a dietary supplement that should be consumed on a daily basis to enhance cognitive functionality, NGF or Neuron Growth Factors represents a combination of ingredients carefully chosen to restore the outgrowth of neurites on the cells of the brain. The argument for this choice relies on that the supplement wants to go directly to the root of cognitive issues which are the neurons. The product seeks to restore the proper communication between brain cells, mainly because it becomes worse with age.

The main component of this remedy is Acetyl L-Carnitine which comes in double form as Arginate DiHCL and HCl. Some studies point out that this ingredient has a positive influence on the axons and dendrites restoration throughout the development and growth stages of the individual. This is an amino acid that is naturally produced by the organism. It has been a researcher about a broad range of mental disorders that include age-related memory loss, Alzheimer’s disease, thinking problems directly linked to alcoholism and late-life depression. Because it helps the organism in the energy production processes, this component is critical to the body and can make a huge difference on the long-term. While its consumption is viewed as likely safe for the majority of adults, it may lead to certain unwanted side-effects such as nausea, vomiting, restlessness and stomach upset. However, these often occur when the daily recommended dosage is exceeded.

There are online customer testimonials about Neuron Growth Factor. What is being reported includes the following:

Neuron Growth Factor is found for sale in bottles that feature 120 capsules. While some individuals think that the price is quite high for a supplement like this, there are others who consider it is worth and that the benefit-cost ratio is justified. The product can be ordered either directly from the manufacturer’s website or other online or local distributors.

The daily dose of Neuron Growth Factors is two capsules per day. no side effects are specifically mentioned for the formula, however such side effects may occur as a result of each individual core ingredient.

8) Our Verdict on Neuron Growth Factors

All in all, Neuron Growth Factors represents a product that was designed for regular individuals that have surpassed the age of 30. While it can also be consumed by young adults or even children, it mostly targets the restoration of brain cell communication with the help of amino-acids and herbal extracts.

It seems that the formula is not something new on the nutritional supplements market, nonetheless it should prove effective because of its ingredients. Pregnant or lactating women and people who are allergic to any of its components should either avoid Neuron Growth Factors or consult a personal doctor before starting the treatment.

Additionally, the price and worth of the product may be subjective, most of the customer testimonials present it as effective. On the other hand, one should be careful during the treatment and avoid excesses so that no side effect occurs. If any discomfort appears, the person should immediately stop talking it and present to a doctor if the symptoms persist. 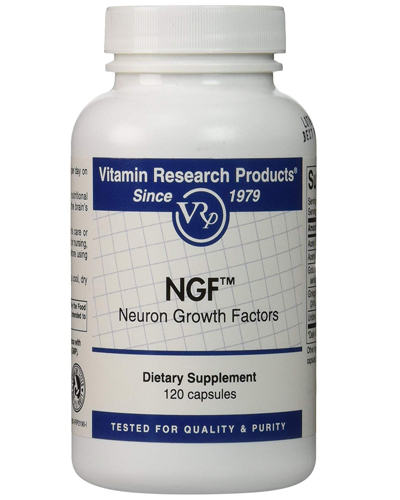 clear
Q:
What does Neuron Growth Factors contain?
A:

Q:
What is Neuron Growth Factors?
A:

Neuron Growth Factors represents a dietary supplement whose formula is based on a combination of amino-acids (Acetyl L-Carnitine) and herbal extracts (Gotu Kola and Ginkgo Biloba). The manufacturer of this product is called Vitamin Research Product. The supplement seeks to reestablish the connection between brain cells, hence improving structure and functionality of the brain, which further results in enhanced memory, and thinking and learning skills. Brain cell communication is usually impaired by aging, hence the formula is best suited for people over 30 years old.

Presented as a dietary supplement that seeks to enhance cognitive functions such as concentration, thinking abilities or memory, Neuron Growth Factor is made out of vitamins, herbal extracts, minerals and amino acids. It tries to affect the root of the problem directly by reestablishing communication between neurons. The amounts in which the ingredients are found are within the daily recommended dosages (as much as a daily recommended intake exists) and side-effects may occur if the proper amount is exceeded on a long-term basis. While for some it represents an expensive product, there are others who believe that the Effectiveness is worth the price. As with most supplements, pregnant women, as well as people who are allergic to any of its components, should visit a doctor before taking this treatment.

Awful product. I’ve been talking it for two weeks already and I haven’t noticed any type of change. Does nothing, the advertisement is a total lie if you ask me.

I believe this product helped me with my stressful life. I’m 35 years old and I’m an attorney and I can say that it’s quite difficult to remember names and places on a daily basis. At some point I thought that my career would be over because I couldn’t motivate myself to take an interest on what I was doing, but since I found this.. things are better. I’m not saying they’ve changed because of these pills, but since I started improving my concentration and memory, everything seems easier. I recommend them.