MRM Ginkgo B Review – Is it Effective?

0 User Comments | 2 Answered Questions
Evidence Based This BrainReference content is medically reviewed or fact checked to ensure factually accurate information. Click for more info. | Overview | Ingredients | Pros & Cons | Precautions | Cost | How To Use | Does it Work | Ginkgo B Alternatives | Q&A

Ginkgo B is a dietary supplement which aims to support memory, concentration, and general cognitive function. It’s distributed by California company MRM Nutrition, who says they were established in 1996. They’re very nature oriented; many of their products are certified vegan, gluten free, organic, and made in a GMP facility. The company focuses on sports and health nutrition, offering a wide variety of supplements for many different needs. Their categories include anti aging, multivitamins, bone and joint health, pre-workout supplements, and weight management.

They’re also the company behind the relaxation supplement Relax-All.

The only active ingredient here is Ginkgo biloba, and every capsule has 60 mg of it. Despite existing in traditional medicine for a large portion of human history, there aren’t a lot of studies on the effectiveness of Ginkgo biloba. It may boost cognitive function in people without known cognitive problems, and that’s the main selling point in supplement products. Most research deals with studying concentrated ginkgo in older adults, and it does seem to be very effective in some areas. Alzheimer’s and cognitive decline can be lessened with Ginkgo. There can be minor improvements in general cognition, blood flow, sleep quality, and more. 120 mg is a very common serving size, and taking 2 capsules a day could potentially do a lot for your mind and body. People report all sorts of benefits with ginkgo extract, explaining its popularity. Sometimes experts recommend a highly concentrated Ginkgo leaf extract called EGb 761, instead of regular ginkgo extract.

2) Details on Ginkgo B Ingredients and Uses

Each vegetarian capsule has 60 mg of Ginkgo biloba extract. This includes 24 percent Ginkgo flavone glycosides and 6 percent Terpenes. Terpenes are the primary parts of the essential oils of many types of plants and flowers. So a Ginkgo terpene would be the essential part of the herb, its “pure” essence. Ginkgo biloba is often thought to be the most popular herb for brain health. It’s a nootropic and makes frequent appearances in traditional Chinese medicine. Some people even use the herb for food. Medicinally, typical doses are 120 to 240 mg daily. Higher doses are sometimes used, up to 600 mg daily in some circumstances, but there isn’t any evidence to suggest that this is more effective than a dose in the 120 to 240 mg range. Several studies show that ginkgo extracts are notably effective as a therapeutic option in alleviating cognitive decline. Other studies show how it increases short term memory capacity in older individuals, usually those over the age of 55. Two capsules of Ginkgo B daily may be the best option.

5) Precautions of Ginkgo B Use

6) How Much Does Ginkgo B Cost?

The label recommends taking 1 to 2 capsules a day, with food. Bottles come with 60 capsules. The average person will probably use that bottle in 3 to 4 weeks. For this level of consumption, Ginkgo B is reasonably priced. If you take 1 a day, it’s very inexpensive. If you take 4 a day, it’s above average. MRM offers free shipping through their website, but only for orders over $100. MRM has three types of sample kits, which are technically free but you have to pay a slightly inflated shipping cost. Each kits contains 7 to 10 samples of various products that MRM sells. If you’re interested in what the company does, but don’t want to pay for a full size supplement, this is a good option for you.

Ginkgo should be taken with meals because of the potential side effects from taking ginkgo. Most are mild, ranging from headache and dizziness to constipation and increased heart rate. It also has some blood thinning properties, so ginkgo shouldn’t be used by pregnant women or people taking certain medications. If you’re allergic to plants like poison ivy and poison sumac, ginkgo can sometimes cause allergic reactions. This is usually from leaves coming into contact from the skin, but overly concentrated extracts can also product such results.

This is an affordable and effective Ginkgo biloba supplement. Many online retailers sell it, so it’s just as easy to find as it is to take. Most people will take two capsules a day, although individual needs will vary. Ginkgo can help with a lot of potential problems, and it’s one of the most popular nootropic ingredients for a reason. If you think you can benefit from Ginkgo B, you likely will. 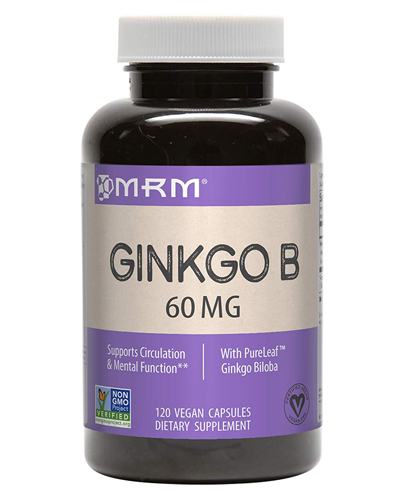 Frequently Asked Questions about Ginkgo B

clear
Q:
What does Ginkgo B contain?
A:

Q:
Will Ginkgo B improve brain health?
A:

This is a simple and inexpensive nootropic supplement which may improve cognition. Each capsule has a good amount of Ginkgo inside, making this product friendly to beginners and advanced users of supplements. You can easily scale your dose up, or down, depending on your needs and where you start out. MRM Nutrition has been around for a long time and seem to know what they're doing. If need a brain enhancing supplement like Ginkgo, you can look into a product like Ginkgo B.