Brahmi is marketed as a herbal dietary supplement designed to support mental alertness, relief stress and anxiety and increase learning capacity. As a side benefit, relief from headache is mentioned. The manufacturer, Morpheme Remedies, claims the formula is the highest quality, most potent and most effective Brahmi extract in a vegetable capsule, although it does not provide evidence to support this claim.

Morpheme Remedies is a company located in Haryana, India. It manufactures herbal supplements according to ancient Ayurvedic medicine principles, whereas all the ingredients match the standards laid in Ayurvedic Pharmacopoeia of India (API). The company manufactures and distributes in India and abroad a variety of Ayurvedic herbal supplements, single herb products and herbal syrups.

Brahmi is safe for both students and teenagers who need increased concentration under stressfull conditions, as well as for adult people who wish to manage mental sharpness and memory as they age.

Brahmi is a plant traditionally used by the Ayurvedic Indian medicine practitioners, more than 3000 years ago. It is most commonly known for its tonic and anti-oxidant properties, with direct impact on memory and learning abilities.
The plant has received a lot of attention during recent years, with extensive research being conducted trying to assess its effectiveness as a nervine tonic (beneficial in patients with stroke and ADD), in reducing stress and anxiety or in treating a variety of disorders such as asthma, skin disease or ulcers.

Responsible for Brahmi’s cognitive improvement properties are two chemicals belonging to the Saponins group and called Bacosides A and B. Apparently these Saponins affect certain key neurotransmitters in the brain such as Serotonin, Gamma Amino butyric acid or GABA and Acetylcholine, promoting relaxation and increased memory capacity and alertness.
Side effects of Brahmi on the long term are not fully understood, but common side effects include bowel movements, stomach cramps, dry mouth, nausea and fatigue.

Besides being used as a memory enhancer, Brahmi is an antioxidant, antitoxin, and a good stress and anxiety reliever. The anti-aging effects of standardized Brahmi (Bacopa Monnier) extract have shown a positive performance in cognition, anxiety, and depression in the elderly in a randomized, double-blind, placebo-controlled trial.

In a study of Brahmi’s effects on children, the herb showed significant improvement in the exploratory drive, perceptual image of patterns and organization, and reasoning ability. It has also shown enhancement in performance of school children with a poor educational stream.

Brahmi is used to aid learning and memory and for anxiety, attention deficit-hyperactivity disorder (ADHD), allergic conditions, and irritable bowel syndrome. People also take Brahmi to treat a backache, hoarseness, mental illness, epilepsy, joint pain, and sexual performance problems in both men and women. It is also sometimes used as a “nerve tonic,” “heart tonic,” and as a “water pill.”

5) Precautions of Brahmi Use

Brahmi is an average priced supplement. It can be found in bottles containing 60 caps that in compliance with the recommended daily dosage should last for 1-2 months. Brahmi can be found for purchase on the manufacturer’s website or from other online retailers.

The recommended daily dosage is 1-2 capsules, twice in a day. Consumer reviews are not publicly available.

Brahmi is one of the many Brahmi extract formulas available today. The formula is claimed to be the highest quality, potency and effectiveness available in a vegetable capsule. The manufacturer extensively details Brahmi mechanism of action, potential benefits and research conducted to present. The formula is likely to work. Still there are no consumer reviews to validate the formula’s effectiveness.

Also, some side effects have been associated to Brahmi, and it has been suspected of slowing down heart rate, increasing secretion of stomach and intestines and causing intestine congestion. It is hence our strong advice that you consult a healtcare provider prior to use. 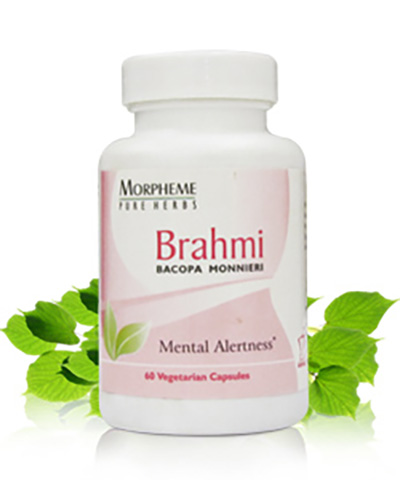 clear
Q:
What are the core ingredients in Brahmi?
A:

Q:
What is Brahmi supplement?
A:

Brahmi is a plant used for medicinal purposes for a long time as an Ayurveid remedy for memory improvement, as a nerve tonic and to stimulate longevity. Known also as Bacopa monniera or Centella asiatica, Brahmi is nowadays used in a multitude of supplements aimed at improving the cognitive function, many of them aimed at controlling aging related brain problems. Also, Brahmi was shown to have anti anxiety effects and to be an effective antioxidant.

Brahmi is an herbal supplement destined to aid memory and mental alertness. Even though the people in India have known this herb's properties for thousands of years, modern research on it was conducted recently by the Central Drug Research Institute. This research has shown that Brahmi possesses antioxidant properties and has an ability to facilitate learning. However, the research conducted on the herb doesn't necessarily apply to the product as well.

Brahmi is such a cute name for a supplement, but leaving that aside, its effectiveness really shows after like, a couple of weeks of usage, and it meets its claims. The thing that has impressed me the most, is how significant can a little pill be.

I really appreciate to read your comments because I bought the first bottle for my 16 years old daughter, who has been having problems at high school, so I hope it works for her.