Coenzyme Q10 (CoQ10) is a substance naturally present in the body that is involved in many cellular functions. It is readily converted to Ubiquinol, its active form by the human body. As time passes and the body ages, CoQ10 conversion levels may decline, making the body more susceptible to damage.

Individuals searching for a way to improve their body’s CoQ10 levels can benefit from taking a CoQ10 formula, and Qunol’s Mega CoQ10 Ubiquinol is one on top lists. Qunol claims that its supplement offers a pure, active form of CoQ10 with superior absorption, and this article evaluates these claims to know what’s true and what’s not, so keep reading if you want to find out.

Ubiquinol is an active form of Coenzyme Q10, which has been shown to have potent antioxidant and brain health potential. First discovered in the 1950s, CoQ10 has been known to help many of the diseases associated with aging, cardiovascular diseases, and certain brain disorders.

The natural production and conversion of Coenzyme Q10 in the human body begin to diminish around the late forties-early fifties, which coincides with the age where common health issues, such as Type 2 Diabetes, manifest.

One way to help reverse the problems associated with the reduction of this vital enzyme is to take a CoQ10 supplement, like Qunol. Although Coenzyme Q10 is found in fish and meat, it occurs in low amounts; therefore, supplementation may be necessary to regain the lost levels.

Mega CoQ10 Ubiquinol is a highly advertised CoQ10 made with pure Ubiquinol, an active form of this coenzyme, making it work more efficiently within the body.

Though the human body converts CoQ10 to Ubiquinol, conversion rates may slow with age. Ubiquinol is responsible for helping the mitochondria generate a considerable percentage of the energy needed by the body’s vital organs, including the heart, brain, kidneys, liver, and muscles, which have the highest energy demand.

Ubiquinol makes up about 90% of the total CoQ10 in the body and is responsible for the antioxidant benefits of CoQ10. Ubiquinol acts as an antioxidant and boosts the functions of other antioxidants in the body, preventing diseases that can result from oxidative stress, such as heart disease, chronic fatigue, and kidney diseases.

5) Where to Buy Mega CoQ10 Ubiquinol

You can buy Mega CoQ10 Ubiquinol from the company website and select retailers like Amazon, Walgreens, and The Vitamin Shoppe.

You should take one softgel with or after a meal or as recommended by your physician.

Mega CoQ10 Ubiquinol helps to support your cardiovascular health and is also considered one of the most potent antioxidants available. It can protect your body’s cells from damage caused by reactive oxidative species and free radicals.

Mega CoQ10 Ubiquinol has several positive customer reviews and contains pure ubiquinol with no artificial additives, thus have minimal side effects in the general population. Overall Mega CoQ10 may be just the CoQ10 supplement you need to give you that boost. 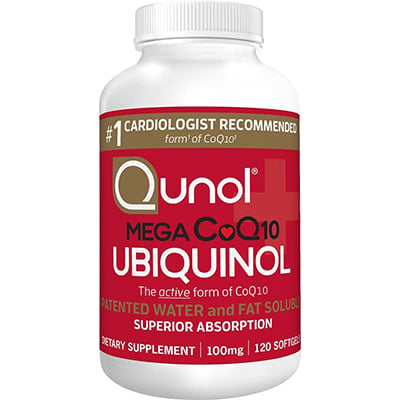 clear
Q:
What are the Mega CoQ10 Ubiquinol ingredients?
A:

Mega CoQ10 Ubiquinol is a supplement that contains an active form of CoQ10 and helps increase the body's CoQ10 levels.

Q:
What are the Mega CoQ10 Ubiquinol side effects?
A:

CoQ10 is generally well tolerated up to 500mg, and no major side effects have been reported from using Mega CoQ10 Ubiquinol.

You can buy Mega CoQ10 Ubiquinol from the company website and select retailers like Amazon, Walgreens, and The Vitamin Shoppe.

Q:
How much does Mega CoQ10 Ubiquinol cost?
A:

Because it contains 100mg of an active, highly absorbable form of CoQ10, Mega CoQ10 Ubiquinol may work as it claims to, though results may vary on individual bases.

Q:
Who should take Mega CoQ10 Ubiquinol?
A:

Q:
How should I take Mega CoQ10 Ubiquinol
A:

Take one softgel with or after a meal or as recommended by your physician.

Q:
How do I contact Mega CoQ10 Ubiquinol customer service?
A:

Q:
Can I return Mega CoQ10 Ubiquinol?
A:

You can contact the Qunol customer service for available return and refund options.

Q:
What do Mega CoQ10 Ubiquinol reviews say?
A:

Mega CoQ10 Ubiquinol has a 4.7-star average rating on Amazon with over 15000 ratings.