Mammary PMG is advertised as a mixture between bovine mammary PMG extract, calcium and magnesium and was created specifically as a healthy mammary glandular functioning support. The business behind this remedy is called Standard Process.

Standard process was established in 1929 by Dr. Royal Lee, also known under the alias “Einstein of nutrition.” He relied its investment on his nutritional beliefs that present the source of a component to be of higher importance than the quantity of each utilized in the remedy. Due to this, it is more reliable to seek for the ingredient’s provenience rather than waiting for positive results just from looking at the quantities found on the labels. A particular feature of Standard Process is that they separated their products into three production lines that are Standard Process Veterinary Formulas, MediHerb, and Standard Process Whole Food Supplements.

The producer claims that Mammary PMG offers nucleoprotein-mineral extracts that were uniquely derived and offer help in supporting cellular health. The formulation is based on a mixture between a proprietary blend that features bovine mammary PMG extract and magnesium citrate and a mineral, Calcium. Each tablet supplies around 120 mg of bovine mammary PMG extract. The protomorphogen extracts may help with cellular support and rehabilitation from corresponding tissues from the human body of the animal extracts.

1) Mammary PMG at a Glance

The relationship endocrine glands have between them is mandatory and it was documented as being directly linked to the proper functioning of the body. The leveling between endocrinal hormones is maintained by a suppressive collection of messages or stimulation that are influenced by a series of endocrine glands which cooperate for enabling physiological processes that should be performed without interruption. Theoretically speaking, mammary glands possess an influence on reproductive glands, but they are in contrast with stimulative influence possessed by adrenal glands, hypothalamus, and corpus lutem.

Nervous and hormonal system feedback mechanism is apparently working between the mammary glands and hypothalamus by secreting gonadotropin-releasing hormone. This communication suppresses the formation of reproductive and pituitary hormones. For maintenance of mammary glands, Standard Process created Mammary PMG whose extracts of protomorphogen are presented as derived from nucleoprotein-mineral molecules. Bovine extracts found in Mammary PMG, for example, should neutralize circulating antibodies, hence participating in cellular health maintenance.

The relationship between endocrine glands is essential and has been documented as directly linked to the normal functioning of the body. The balance between endocrinal hormones is sustained by a stimulative or suppressing collection of messages which are influenced by a group of endocrine glands cooperating to enable physiological processes which should perform without interruption. From a theoretical point of view, mammary glands hold an influence on reproductive glands, but in contrast, the stimulative influence on adrenal glands, corpus luteum, and hypothalamus.

Hormonal and nervous system feedback mechanism appears to be working between the hypothalamus and mammary glands when it comes to secretion of gonadotropin-releasing hormone. In turn, this communication suppresses formation of pituitary and reproductive hormones. To maintain the health of mammary glands, Standard Process developed Mammary PMG whose photomorphogenic extracts are derived from nucleoprotein-mineral molecules. For example, bovine extracts found in this formula appear to neutralize circulating antibodies, thus contributing to cellular health maintenance.

Additionally, calcium was used because it is an element required by the body to maintain and build strong teeth and bones while also triggering a myriad of other physiological processes. The body doesn’t effectively absorb some types of calcium found in food. Thus its benefits are lost. The calcium lactate used in this product represents a highly bioavailable and useful form because it is converted into calcium bicarbonate through one chemical step.

There are online customer testimonials about Mammary PMG. What is being reported includes the following:

4) What Mammary PMG Does?

6) How Much Does Mammary PMG Cost?

Standard Process offers Mammary PMG at an affordable price and in the form of bottles that contain 90 tablets. Because the daily suggested dosage is of one tablet per meal with water, a bottle can last for thirty days of usage with no excesses involved. Compared to similar supplements, its price can even be viewed as cheap, especially because some retailers offer promotions and discounts. Unfortunately, people from outside the US can’t purchase this product directly from Standard Process website. Thus they should seek on their local suppliers. A tablet delivers approximately 2% of cholesterol and calcium from the daily recommended intake.

In addition, calcium was added due to the fact that it is an element needed by the body to sustain and build strong bones and teeth while also triggering a series of other physiological functions. Some forms of calcium usually found in food aren’t completely absorbed by the body, thus its beneficial effects are lost. However, the calcium lactate utilized in this product is a useful and highly bioavailable form because it is immediately converted into calcium bicarbonate.

Created as a sustainer or enhancer of the mammary glandular health, Mammary PMG is promoted as a enhancer of healthy connective tissue, hence alleviating symptoms of breast pains during menopausal or menstrual periods. Its positive effects rely on a mixture between calcium and a proprietary blend that features bovine mammary extract and magnesium citrate. The calcium utilized in this formula comes as calcium lactate, thus it is easier absorbed by the body compared to other calcium forms. Vegans and vegetarians can’t follow this treatment because it has animal traces. Despite the fact that there is no online evidence of side-effects of taking this supplement, because of its components, some like diarrhea, nausea, or stomach pains can appear and it is recommended to stop the treatment if so. 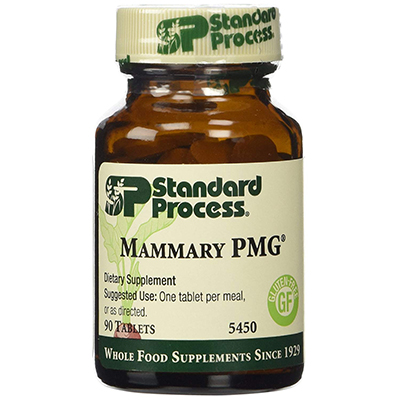 clear
Q:
What does Mammary PMG contain?
A:

Mammary PMG was created as a sustainer and enhancer of the health of mammary glands. It was introduced on the nutritional market in 1956 by Standard Process and since then has been used to alleviate symptoms of breast pains or other possible deregulations of mammary glands. Its effects rely on a combination between a proprietary blend that features bovine extract, magnesium citrate, and calcium. However, vegans and vegetarians can't take this supplement.

Designed as an enhancer or sustainer of the mammary glandular health, Mammary PMG is advertised as a promoter of healthy connective tissue, thus helping alleviate symptoms of breast pains during menstrual or menopausal periods. Its positive effects are based on a combination between calcium and a proprietary blend which contains magnesium citrate and bovine mammary extract. The calcium used in this formulation comes in a lactate form. Thus it is easily absorbable by the body in comparison with other existential calcium forms. Vegetarians and vegans can't take this supplement. Even though there is no online evidence of potential side-effects of this treatment, due to its components, some like nausea, diarrhea, or stomach pains may appear, and it is advised to stop the treatment if so immediately.

Wow this i am in my second week of taking this. I was having sore breasts for weeks now and I normally get bad cramps the first day of period. Well after 4-5 days of taking 3 caps a day by breast stopped being so sore and I have had no menstrual cramps, no lightening pain shooting down my legs. Most of the day I didn’t even notice I had my period.

There is great controversy on how best to prevent and treat Breast Cancer. Standard Process has always taken the position of “do no harm”. Because of this, I choose their products and hope they can make a difference!

I believe that this has helped to keep me from getting an infection while nursing so this has been my number 1 supplement while breastfeeding.