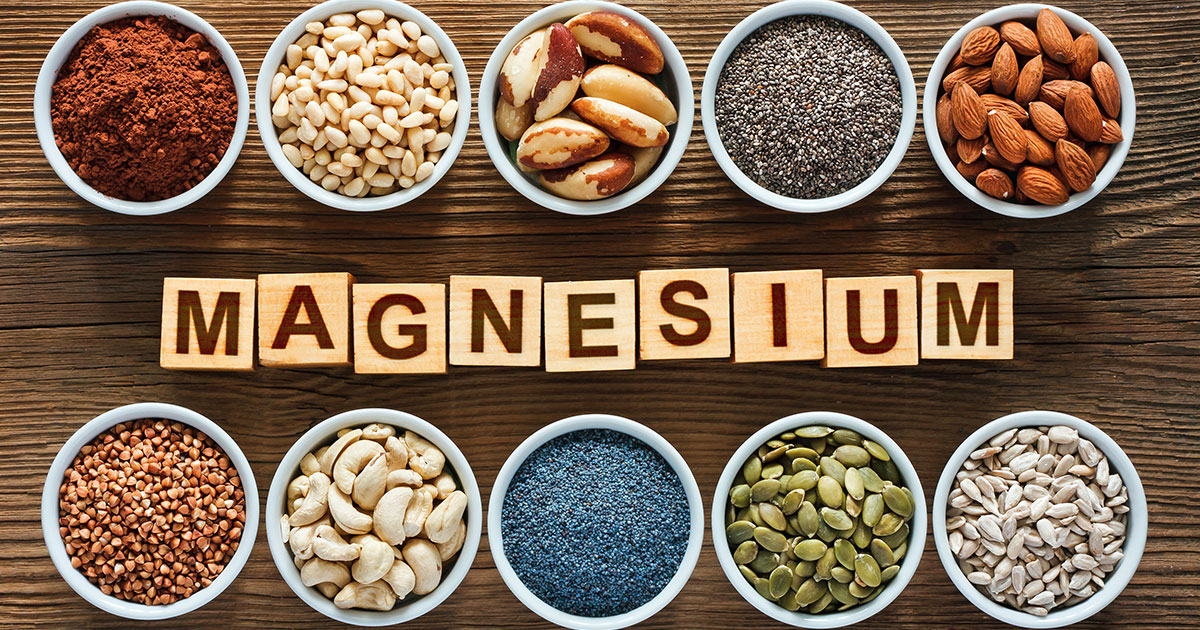 Magnesium is an essential mineral that is important to the proper functioning of the body. Although it is found in the body and a variety of foods, too many Americans do not have a sufficient amount of Magnesium. In fact, it is estimated that approximately 50% of people in the United States are consuming a magnesium-deficient diet.[1]

This mineral provides a variety of health benefits. From cardiovascular well-being to improving bone health, migraines, sleep disturbances, brain health, and more, magnesium is a super nutrient that should be ingested daily.

Magnesium is not just an element found on the periodic table. It is also considered a major mineral, meaning that the body requires large amounts of it, as opposed to trace minerals like zinc or iron. Foods rich in magnesium include whole grains and green leafy vegetables. Populations, particularly in western culture, do not consume enough of these types of foods in their diet to provide an adequate amount of magnesium.

The amount of magnesium required to perform necessary bodily functions varies depending on age and gender. Female adults should ingest a total daily amount between 310 and 320mg, and the amount for adult males ranges between 400 and 420mg. It is important to understand that these amounts are for Magnesium alone. Supplements may show the amount of magnesium as a salt form, which is a greater amount; however, most supplements will show both.

Does Magnesium Support A Healthy Brain?

Every cell in your body, including your brain cells, requires magnesium to function properly. It is involved with hundreds of chemical reactions in the body, such as transforming food into energy, generating protein, repairing DNA, and regulating neurotransmitters that send messages in the brain. Magnesium enhances nerve signaling at the spaces where nerve endings meet. These nerve endings are called synapses. The brain’s ability to form new synapses and discard old ones improves our ability to learn and helps to prevent memory loss.

Magnesium also protects certain receptors, called NMDA receptors, in the brain that are associated with brain development, memory and learning. It blocks these receptors, preventing them from being overstimulated, thereby preventing brain cell death.

What Does The Data Show?

Other Health Benefits Of Magnesium

Magnesium is associated with a slew of other health benefits. Studies have found that magnesium levels are linked to cardiovascular disease. A person who has sufficient magnesium levels may have a lower risk of heart disease, stroke, and high blood pressure. It has also been heavily studied with regard to migraines. Research indicates that people with migraines are more likely than others to have a magnesium deficiency. Magnesium has been shown to help prevent migraines and may treat an acute migraine attack.

There is strong evidence that magnesium also promotes bone health and supports better sleep. In addition, it may help alleviate anxiety symptoms and help lower blood sugar levels in people with type 2 diabetes.

Side Effects And Warnings

There are side effects associated with magnesium. These effects include diarrhea, nausea, and stomach cramps.

It is important to note that too much magnesium is not good either. Ingesting amounts greater than 5,000 mg per day can lead to toxicity and symptoms that include:

There are many different formulations of magnesium supplements available on the market. Certain formulations are better for different uses. For example, magnesium glycinate is a dietary supplement that is used to help improve sleep and heart health, while magnesium citrate is more often used for constipation.

Magnesium threonate, or magnesium L-threonate is generally considered the best formulation for brain health. The reason is that this form of magnesium is capable of crossing the blood-brain barrier, making it readily available in the brain.

Magnesium is an excellent mineral to support brain health. Because most Americans are not achieving optimal amounts in their diet, supplementation is a great alternative. Along with its many other health benefits, magnesium has been shown to improve overall cognition, learning and memory.

Q:
Does magnesium promote a healthy brain?
A:

Q:
How does magnesium improve cognition?
A:

Q:
What else does magnesium do?
A:

Magnesium may help prevent and treat migraines, supports bone health, and aids with anxiety and insomnia.

Q:
Are there side effects from taking magnesium supplements?
A:

Potential side effects include diarrhea, nausea, and abdominal cramps.