Iodomere Review – Is it Effective?

Advertised as offering sustenance to the thyroid function as well as immune and cellular function, Iodomere possesses iodine content which ranges between Standard Process Trace Minerals B12 and Standard Process Prolamine Iodine.

It was created and is presently distributed by a business founded in Milwaukee named Standard Process. Its creator is Dr. Royal Lee who is regarded on the nutritional field as the “Einstein of nutrition.” His remedies are based on the belief that the source of the component is more important than the amount of each used in the product. Due to this, even a little amount of well-chosen whole foods can offer a considerable effect to the organism.

Iodomere features multiple nutrients that come from a variety animal, plant and shellfish sources. Each tablet provides approximately 160 mg conch, known as Strombus gigas and represents a natural source of protein. Furthermore, the carrot root provides natural vitamins, beta carotene and antioxidant. The manufacturer claims that the nutrients contained in Iodomere have been processed in a way that lead to a preservation of the nutrients which remained intact and complete.

Specifically, Iodomere supports metabolism as well as healthy thyroid functions. On the other hand, none of the producer statements have been evaluated or approved by the FDA.

Iodomere is advertised as a homeopathic remedy that should improve functions of the thyroid while also sustaining the health of the immune system. Its main ingredient is iodine and actually gives the supplement its name. This ingredient represents a trace element and an essential micronutrient, generally necessary to maintain endocrinal efficiency, proper cellular functions and normal growth.

The quantity of iodine found in Iodomere is somewhere between other two products of Standard Process that are Trace Mineral B12 and Prolamine Iodine. In addition, iodine features Echinacea, thus it is important when it comes to supporting functions and tissues of the immune system.

Considering the fact that iodine is essential for formation of two thyroidal hormones, triiodothyrosine and thyroxine, it provides a boost for the rate in which oxygen and organic molecules are consumed in the production of heat and energy. Even though only small amounts of iodine are required to support health, iodine supplementation is important for people who have an iodine gap on a daily basis. Due to the fact that the body can’t store iodine, a regular intake is required for normal thyroid hormone production.

If homeopathy isn’t something you’re looking for, but still prefer a trace mineral type of supplement, look no further than Etherium Gold.

Iodomere is a promoted as a homeopathic remedy which should enhance functions of the thyroid while also maintaining the health of the immune system. Its core ingredient is iodine which gives the remedy its name. This component is a trace element as well as an essential micronutrient, usually necessary to sustain endocrinal efficiency, normal growth, and proper cellular functions.

The amount of iodine contained in this dietary supplement is between other two products of Standard Process which are Trace Mineral B12 and Prolamine Iodine. Additionally, Echinacea contains iodine. Thus it is critical in supporting tissue and function of the immune system.

Because iodine is essential when it comes to the formation of two thyroidal hormones, thyroxine and triiodothyronine, it offers a boost when it comes to the rate in which organic molecules and oxygen are consumed to produce heat and energy. Despite the fact that only small amounts of iodine are needed to support proper health, iodine supplementation is nevertheless essential for people who lack it in their daily diets. Because the body is incapable of storing iodine, a regular ingestion is needed for thyroid hormone production.

Therefore, people suffering from diseases of the central nervous system as well as those with iron deficiency such as women who stopped ovulating, individuals with autoimmune diseases determined by the thyroid gland or those with thyroid cancer may benefit from this remedy. It is considered to be likely safe when taken in recommended amounts, but at the same time, it may cause some unwanted side-effects like bruising, swollen lips, joint pain or fever.

There are online customer testimonials about Iodomere. What is being reported includes:

People can order Iodomere either directly from the manufacturer website or other online retailers. However, those who live outside the American continent have to seek for it on other online providers because there is no international shipment policy. It comes in the form of bottles which contain 90 capsules. Because the daily suggested intake is of one capsule per day, a bottle can last for up to three months. However, for more serious conditions, the professional healthcare may recommend a bigger intake on a daily basis. When people buy this product in larger amounts, there are usually discounts or promotions offered by the online providers.

Therefore, people who have diseases of the central nervous system or those with iron deficiency like women who stopped ovulating, people with autoimmune diseases liked to thyroid gland or those who have thyroid cancer may have beneficial effects from this remedy. It is viewed as likely safe when taken in suggested amounts, but at the same time it may lead to some unwanted side-effects like joint pains, swollen lips, bruising or fever.

Sustaining the health of the thyroid and the functions of the nervous cellular, Iodomere features an amount of iodine that is in between other two products from the same company called Prolamine Iodine and Trace Minerals B12. Released on the nutritional field in 1964, this supplement provides nutrients like Echinacea and carrot root which contain several nutrients and antioxidants important for immune and thyroid cellular function. Although it is often viewed as an effective product with no side effect, on long-term utilization it may determine a series of side-effects and if any of them happens, it is advised to immediately stop the treatment. 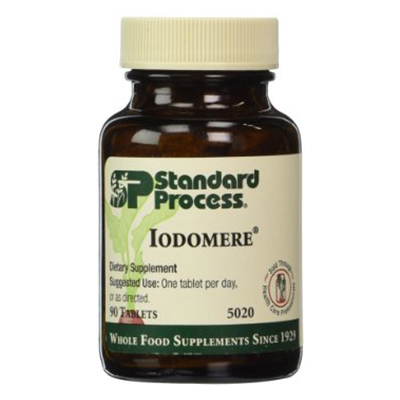 clear
Q:
What are the active ingredients in Iodomere?
A:

Q:
What is Iodomere supplement?
A:

Iodomere represents a product that contains a proper quantity of iodine, thus enhancing the health of the thyroid gland as well as the central nervous system. Therefore, people with conditions linked to lower thyroid production such as autoimmune diseases or women who stopped ovulating may take advantage of this treatment. Furthermore, it was released on the market in 1951 and has had a fair share of positive feedback by consumers.

Supporting the health of the thyroid as well as nervous cellular function, Iodomere contains a quantity of iodine which ranges between other two supplements from the same company called Trace Minerals B12 and Prolamine Iodine. Introduced on the nutritional market in 1964, this supplement offers nutrients such as Echinacea or carrot root which represent several antioxidants and nutrients which are viewed as important for thyroid and cellular immune function. Even though it is often considered to be an effective product with no reported side-effect, on long-term usage, it may cause a series of side-effects, and if any of them occurs, the treatment should be immediately stopped.

Since I’ve been eating real foods for about 5 years now and using only real sea salt, my blood tests showed under-active thyroid. The traditionally medically trained doctor told me I’m not low enough for medication and there’s nothing he can do. My naturopath doctor told me to take iodine tablets, once a day, and my numbers came back normal in a couple of months.

I was referred to this product by a Clinical Nutritionist and have found it a helpful supplement to boost my thyroid.