Bluebonnet Ubiquinol is advertised as a dietary supplement based on an active form of Coenzyme Q10, a potent antioxidant that plays a crucial role in general health.

Bluebonnet Nutrition, a family-run business located in Texas and established in 1991, makes Bluebonnet Ubiquinol. The manufacturer strives to maintain this formula as natural as possible and excludes the use of egg, milk, fish, gluten, rice, sugar, or fish in the composition of Bluebonnet Ubiquinol.

This review discusses Bluebonnet Ubiquinol’s ingredients, potential benefits, adverse effects, etc., so keep reading to find out more about it.

Bluebonnet Ubiquinol is a CoQ10 dietary supplement formulated to increase the bioavailability and effects of CoQ10.

Experience with this ingredient and scientific studies have shown it to be effective with several conditions of the circulatory system, such as high blood pressure, chest pain, or congestive heart failure.

CoQ10 has also been used for its therapeutic effect on health issues like macular dystrophy, breast cancer, chronic fatigue, and Lyme disease.

CoQ10 is also said to sustain high energy levels and can be used to improve athletic performance.

2) How Did Bluebonnet Nutrition Start?

Owned and operated by three generations of the Barrows family, Bluebonnet Nutrition was formed in 1991 in the United States. The seed for Bluebonnet was planted by Gary Barrows, then a sales rep for supplement brands and now President of Bluebonnet.

Bluebonnet Nutrition makes and markets many dietary supplements, including vitamins, amino acids, and herbs, under the Bluebonnet brand name. The company makes supplements that are organic, non-GMO, and carefully manufactured to retain ingredient potency and purity.

The company was named Manufacturer of the Year in 2006 by Vitamin Retailer and has manufacturing facilities that are up to the highest standards and are Kosher quality.

The active ingredient in Bluebonnet Ubiquinol is Kaneka Ubiquinol.

Ubiquinol, the sole active ingredient found in this blend, is an active form of Coenzyme Q10, a vitamin-like substance that can be found throughout the body but more in the brain, heart, liver, and kidneys.

Coenzyme Q10 is necessary for cell growth and maintenance and is stored in the mitochondria (also known as the powerhouse) of cells. Studies have concluded that low levels of CoQ10 have been linked to cancer, heart disease, brain disorders, and more.

CoQ10 has also been shown to help increase energy levels in the body and can be used as an aid with physical exercise.

Bluebonnet Ubiquinol is a CoQ10 dietary supplement that was created in order to make the healing capacities of this ingredient more available and in the form of an easy-to-swallow capsule.

Some of the claimed benefits of this supplement are;

There are rarely any side effects associated with using this supplement; however, some users may experience symptoms like abdominal discomfort, nausea, or vomiting that may be short-lived.

7) Where to Buy Ubiquinol?

You can purchase Bluebonnet Ubiquinol from select online retailers, including Amazon, iHerb, and Walmart.

Bluebonnet Ubiquinol generally costs $30.50 for a 30-count bottle and $52.50 for a 60-count bottle. However, the prices may vary by retailer.

Take one vegetarian softgel daily as a dietary supplement, preferably with a meal, or take it as directed by a healthcare practitioner.

10) Our Verdict on Ubiquinol

Bluebonnet Ubiquinol is a product that aims to supply the needed amounts of the active form of CoQ10, a potent antioxidant that sustains general health and also provides a series of therapeutic effects, helping with conditions like chronic fatigue or high blood pressure.

Ubiquinol supplementation can also benefit athletes and the elderly due to increased demand and reduced production respectively.

Bluebonnet Ubiquinol is formulated with 100mg of active CoQ10 (Ubiquinol), which may help to support energy levels and heart health and has minimal reported side effects.

Overall, this supplement is based on a science-backed ingredient and appears to work as it claims. It is also free of GMOs, soy, and gluten and is safe for vegan and vegetarian use.

Nevertheless, it is not intended to diagnose, treat, cure or prevent any medical illnesses and should only be used as recommended. 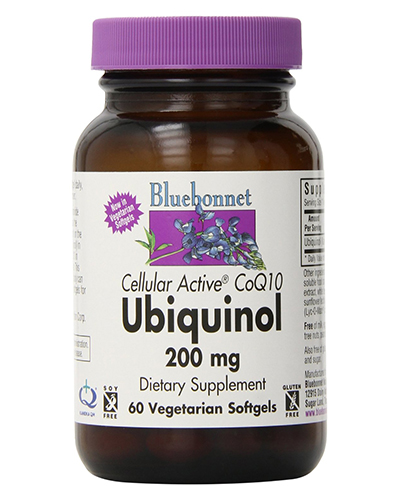 clear
Q:
What are the active ingredients in Ubiquinol?
A:

The active ingredient in Bluebonnet Ubiquinol is Kaneka Ubiquinol.

Q:
Ubiquinol is all about what?
A:

Q:
What are the Ubiquinol side effects?
A:

There are rarely any side effects associated with using this supplement; however, some users may experience symptoms like abdominal discomfort, nausea, or vomiting that may be short-lived.

Q:
Where can I buy Ubiquinol?
A:

You can purchase Bluebonnet Ubiquinol from select online retailers, including Amazon, iHerb, and Walmart.

Q:
How much does Ubiquinol cost?
A:

Bluebonnet Ubiquinol generally costs $30.50 for a 30-count bottle and $52.50 for a 60-count bottle. However, the prices may vary by retailer.

Q:
What are the advantages of taking Ubiquinol?
A:

Q:
Are Ubiquinol benefits actually a reality?
A:

Ubiquinol, the active form of Coenzyme Q10, is a potent science-backed antioxidant with many benefits, and Bluebonnet Ubiquinol supplies the body with ample amounts of CoQ10 necessary to maintain its health.

Q:
Are there any dangerous ingredients in Ubiquinol?
A:

Bluebonnet Ubiquinol is free of chemical additives and major allergens, including milk, soy, nuts, and gluten, and is safe for use as recommended.

Q:
Who should take Ubiquinol?
A:

Q:
How should I take Ubiquinol
A:

Take one vegetarian softgel daily as a dietary supplement, preferably with a meal, or take it as directed by a healthcare practitioner.

Q:
How do I contact Ubiquinol customer service?
A:

Q:
Can I return Ubiquinol?
A:

Return and refund options for Bluebonnet Ubiquinol may vary by retailer.

Q:
What do Ubiquinol reviews say?
A:

There are many online testimonials about Bluebonnet Ubiquinol. What is being said includes the following:

Q:
Who makes Ubiquinol?
A: