Focus and Energy Optimizer Review – 8 Things You May Not Know

Focus and Energy Optimizer is a nutritional supplement created as a support for optimal energy levels and increased focus capacity. The formula was developed by Dr. Daniel Amen, a worldwide famous neuroscientist and founder of the Amen Clinics, which operates facilities in several cities on the USA territory. Dr. Daniel Amen is also an expert in brain imaging applied to everyday clinical medicine.Focus and Energy Optimizer is advertised as a caffeine free product, thus avoiding the jitter commonly associated to stimulants and caffeine based products.The supplement also contains a blend of three adaptogens, plants which work synergistically to boost stamina and endurance and to help the body naturally respond to stress. These three adaptogens, specifically Ashwaganda, Rhodiola and Panax Ginseng are claimed to be scientifically proven to support a healthy immune system and to boost the resistance of the body to daily stress factors.

Focus and Energy Optimizer is a formula mainly based on a blend of herbal extracts, such as Green Tea Leaf, Rhodiola Rosea, Ashwagandha and Panax Ginseng.

Green tea, a plant originated in China, became widespread in the Western countries over the past two decades, due to extensive research conducted to prove its beneficial effects. The extract has been the subject of many clinical studies which concluded that it may lower the risk of heart disease and certain types of cancers and boost the metabolism. Regarding its presumed cardiovascular and cancer risk reduction effects, FDA stated that there is no credible evidence to support these claims. Common side effects include an upset stomach and constipation.

Rhodiola Rosea is a plant with adaptogenic properties, meaning it helps the body adapt and fight chemical, physical and environmental stress. The Rhodiola extract is commonly used to treat depression, increase physical performance and improve sexual functions. Its potential side effects are not known, because there is no sufficient scientific evidence.

2) What Are Focus and Energy Optimizer Ingredients?

3) Is Focus and Energy Optimizer Right for You?

Composed of a formula combining green tea and choline with three adaptogens, Focus and Energy Optimizer is promoted as a supplement that improves energy levels, thus enhancing focus and concentration. This remedy contains Ashwagandha Extract. Ashwagandha, also known as Withania Somnifera, Is an herbal dietary supplement grown in both North America and India. Numerous studies by researchers at India’s Banares Hindu University have investigated the anti-inflammatory, antioxidant and anti-stress properties of Ashwagandha and the majority proved this herb’s Effectiveness. It is particularly known for its ability to calm and some research indicates this herb can be used to promote sleep. However, large doses of Ashwagandha might cause stomach upset, diarrhea and vomiting.

Another ingredient found in this formula is Choline. Choline is a chemical similar to the B-vitamins that serves various functions in the human body, particularly in the structure of cell membranes and protecting the liver from accumulating fat. In addition, it may help lower cholesterol and homocysteine levels associated with cardiovascular diseases as well as protecting against some types of cancer. High doses of Choline are possibly unsafe for adults and children and may lead to some unwanted side effects like gastrointestinal distress, diarrhea and vomiting.
There are few to none online testimonials regarding the beneficial properties of this supplement. Thus its Effectiveness can’t be guaranteed.

Found for purchase on manufacturer website and other online retailers, Focus and Energy Optimizer is an expensive product, especially in comparison with similar products. However, bought in bigger quantities is affordable due to the discounts and promotions that are offered. It is sold by bottles containing 120 capsules that should be sufficient for a two month treatment.

Focus and Energy Optimizer is not scientifically researched as a formula, not is it approved by the FDA. No reviews from consumers could be identified to support the claimed benefits. The suggested dose is one to two capsules twice daily with meals or as directed by an informed healthcare professional. It is advised not to take it in the evening due to its energizing properties.

The formula, created by Dr. Daniel Amen is advertised as an effective support for optimal focus and maximum energy levels. The product is a mixture of herbal extracts proven effective in promoting better focus. The three adaptogens contained help increase the body’s resistance to stress and the strength of the immune system.

The majority of the ingredients have been the subject of clinical trials which showed good qualities in improving brain function, although research is still required for some of their health applications. However, there is no scientifically based evidence to support the whole formula’s effectiveness.

Focus and Energy Optimizer is recommended as a dietary supplement, but there are no side effects or precautions issued by the manufacturer. This is why we believe it is necessary to inform your healthcare professional before taking the treatment. 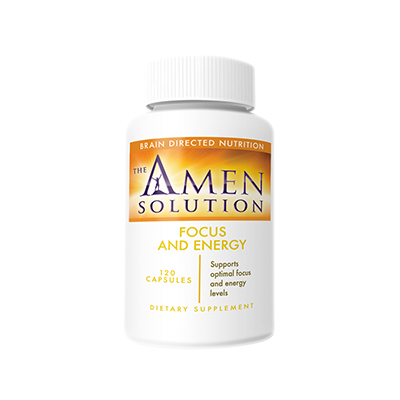 Customers Questions and Answers with Focus and Energy Optimizer

clear
Q:
What are the Focus and Energy Optimizer ingredients?
A:

Q:
What is Focus and Energy Optimizer supplement?
A:

Focus and Energy Optimizer presents itself to be a formula that aims to ensure optimal energy levels. The company behind this product is called Amen Solutions and is situated in The United States. Focus and Energy Optimizer is a dietary supplement that uses ingredients such as Green Tea Leaf extract, Rhodiola Rosea extract or Choline as to support brain stamina and ensure a higher resistance to stress.

Q:
Does Focus and Energy Optimizer work?
A:

Focus and Energy Optimizer is a dietary supplement composed of herb extracts in combination with choline. It is promoted for its properties regarding optimal focus and energy levels. However, there are no sufficient online testimonials that support its effectiveness.

There are some side effects related to the usage of this remedy and if any occur, the consumption should be immediately stopped. Due to the fact that Focus and Energy Optimizer is a supplement, it does not replace a healthy diet and it should be balanced with an exercising plan and normal sleep schedule.

I have been using it for three weeks now and I feel some improvement.