SAMeis advertised as a science based nutritional supplement designed to enhance mood and neural function. The supplement is manufactured by Doctor’s Best. The company mentions joint comfort and mobility and liver and detoxification support as side benefits of the formula.Doctor’s Best is located in California, United States and was founded in 1990. The company offers therapeutic nutrition solutions based on traditional medicinal knowledge and current scientific research. The product portfolio includes products which target a variety of ailment claims, including brain and memory, mood enhancement or sleep and relaxation. SAMeis recommended exclusively to adults. People diagnosed with bipolar disorder (or manic depression) are advised to avoid SAMe supplementation, as it may aggravate the manic phase.

1) What Are SAMe Ingredients?

SAMe is a single ingredient formula; particularly it contains a derivate of the amino acid Methionine called SAMe. SAMe is one of the most active donors naturally produced by the body and has received increased attention over the past few decades. Research revealed important functions of SAMe in mood and cognitive health, joint mobility, liver, energy production and other vital processes.

Essential functions of the nervous system are due to SAMe’s role in the secretion process and metabolism of Serotonin, Melatonin and Dopamine, key brain neurotransmitters which regulate behavior, mood, and emotions. SAMe has been the topic of research investigating mood disorders including major depression or dysthymia. Several studies have shown that it can improve symptoms associated with anxiety disorders including panic attacks or social anxiety. However, the number of clinical research is extremely limited, and SAMe is not approved by the FDA as depression or anxiety treatment.

SAMe is mostly produced and active in the liver, where it supports liver detoxification and bile secretion process. Low levels of SAMe may be an indicator of liver dysfunction and lead to liver dysfunction.
Long term side effects of SAMe have not been systematically studied. There is concern that high doses may lead to anxiety, restlessness, and insomnia, gas, vomiting, diarrhea, dry mouth, sweating, dizziness, constipation, headache, anxiety, and nervousness. Special precautions are recommended to people suffering from bipolar disorder and Parkinson’s disease.

The manufacturer recommends taking one tablet daily away from food. The formula does not contain milk, egg, corn, soy, wheat, gluten sugar, sweeteners, or preservatives.

There are testimonials posted online about SAMe. What is being stated includes:

4) Precautions of SAMe Use

SAMe is available in bottles of 30 and 60 enteric-coated capsules. The price of the formula is similar to other SAMe featuring products. A bottle of 30 capsules, meaning a month’s supply, costs roughly $40, at list price. This is a rather high price. However, promotions and discounts are usually available, and you could purchase the supplement at a lower cost.

The formula can be purchased from online or local retailers. A section of the manufacturer’s website id dedicated to retailer identification, using the ZIP code.

SAMecontains 200 mg SAMe (S-Adenosyl Methionine), a compound naturally produced by the body and known as one of the most active methyl donors. SAMe has been extensively researched over the past years and evidence shows it plays an important role in the immune system, cell membranes health and liver function. Additionally, research revealed it participates in the secretion and metabolism of key neurotransmitters such as Serotonin, Melatonin and Dopamine. By doing so, SAMe may potentially be effective in health areas that these neurotransmitters are known to regulate. For instance, SAMe is tested for benefits against depression, anxiety, obsessive-compulsive disorder or panic, known to be caused by Serotonin deficiencies. Similarly, it may positively impact memory and learning capacity, aging, sleep, aggression mood and motivation. The largest amounts of SAMe are produced and active in the liver. This is why low levels may indicate liver dysfunction and lead to liver damage. Supplementation is generally used to reduce inflammation and dysfunction of the liver. Long term side effects of SAMe are currently unknown, however high doses may lead to anxiety, restlessness and even insomnia. Special precautions are recommended to people suffering from bipolar disorder. The manufacturer recommends taking 1 tablet daily away from food, although an exact daily dose has not been established yet. Consumer reviews of SAMeare mixed.

SAMecontains a single active ingredient, SAMe. Research revealed that this naturally occurring compound is able to offer liver protection, joint function support and mood enhancement. While large scale research is required to confirm some of SAMe’s benefits, it can be argued that SAMe will work to deliver on its advertised benefits at least for some consumers. Consumer reviews received are mixed: while some consumers report almost immediate results, others say this is nothing more than a placebo. All things considered, we believe you should discuss all details with a healthcare provider if you decide to use SAMe. 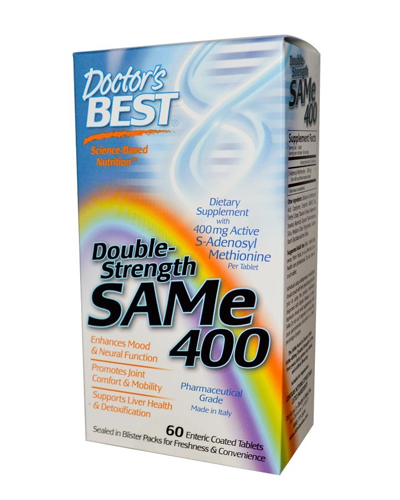 clear
Q:
What does SAMe contain?
A:

SAMe features 400 mg of the naturally produced S-Adenosyl Methione (SAMe) and is advertised to support mood and neural function, promote liver health and joint mobility. The formula is manufactured by Doctor's Best and is free of most allergens and artificial preservatives. SAMe is believed to help alleviate mood disorders symptoms (depression, dystimia, etc), reduce anxiety levels and even sleep and learning capacity. Side effects occur especially in case of excessive dosage and include symptoms such as vomiting, diarrhea, anxiety and insomnia. Caution is recommended in patients with bipolar disorder and Parkinson's disease.

Q:
Are SAMe benefits actually a reality?
A:

SAMe is a naturally produce a substance with a great number of benefits on many body processes and functions, including the liver, the nervous system, mood, and joints. Research reveals potential benefits against a range of mood disorders and anxiety symptoms. Still, SAMe is not recognized as a potential treatment for these ailments. There are potential side effects associated to SAMe, and consumer reviews referencing the formula are mixed. To conclude, we would say that the formula will work for some people, while for others it may show modest results. This is why we advise that you consult a healthcare specialist before deciding on the right treatment for your condition.

I’ve been taking SAMe 200 mg per day for over a year now, and I find it excellent as a mood stabilizer and gentle but consistent anti-anxiety treatment. And that has been in the face of extreme stressors! As a nurse, I have found products such as these so much better than the majority of drugs, which often come with severe side effects.

I began taking Doctors Best SAMe a few ago. Prescription antidepressants can’t compare with it and I have tried more than a few, after losing my husband to cancer. I personally recommend taking it taken around noon, on a empty stomach. I feel it better absorbs that way. I wish it weren’t this pricey, but it’s still the best on the market for me.