Dexedrine Review – Is it Effective?

0 User Comments | 19 Answered Questions
Evidence Based This BrainReference content is medically reviewed or fact checked to ensure factually accurate information. Click for more info. | Facts | What's Inside? | Is it Safe? | Warnings | Cost | Shop For Dexedrine | How To Take | Verdict | Alternatives to Dexedrine | Q&A

By increasing the number of two neurotransmitters – norepinephrine and dopamine – this prescription drug claims to improve a person’s concentration and focus, while also reducing impulsive behavior and hyperactivity.[4] 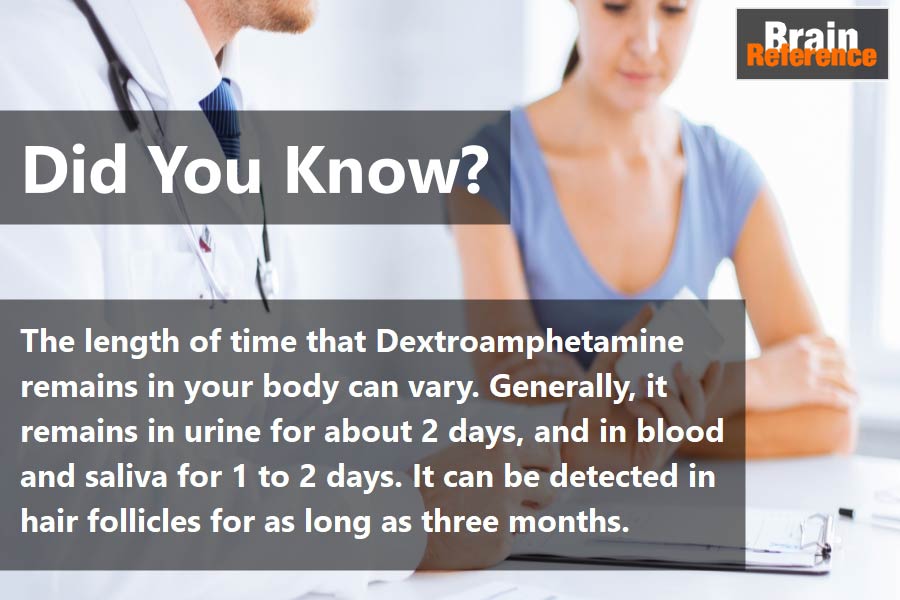 Dexedrine is the brand name for a medication that is formulated entirely of Dextroamphetamine. It is available in tablets and as capsules called Dexedrine Spansule.

Dexedrine tablets are short-acting and are effective for about four (4) to six (6) hours. They are usually taken two (2) or three (3) times per day.[5]

On the other hand, Dexedrine Spansule is an extended-release variant, which is typically effective for eight (8) to twelve (12) hours.[6] When a capsule is taken, an initial dose is released immediately, and the remaining substance is released gradually. Unlike the tablets, these capsules are only taken once daily.

2) How Did Amneal Pharmaceuticals Start?

Racemic amphetamine was first produced in the lab under the name phenylisopropylamine in Germany, 1887, by the Romanian chemist Lazar Edeleanu.[7] However, the substance remained relatively unknown to the public until 1932 when the pharmaceutical company GlaxoSmithKline (also known as Smith, Kline and French) launched phenylisopropylamine in the form of the Benzedrine inhaler for use as a bronchodilator.

In 1935, the medical community grew aware of the stimulant characteristics of amphetamine, specifically Dextroamphetamine. Two years later, in 1937, GlaxoSmithKline produced the first Dextroamphetamine tablets under the brand name Dexedrine.[8]

The new drug was approved in the United States to treat attention disorders (ADD and ADHD), narcolepsy, and obesity. In Canada, Dexedrine was also prescribed for Parkinson’s disease and epilepsy.

For the United States market, Dexedrine is produced by Amneal Pharmaceuticals.[10] The company specializes in researching, manufacturing, marketing, and selling generic and biosimilar pharmaceutical products.

Some adderrall supplements like Adderplex make use of a more complex formulation.

4) What Does Dexedrine Do?

While long-term dextroamphetamine exposure at high doses in some animal species is believed to lead to nerve damage and abnormal dopamine system development,[13][14] pharmaceutical amphetamines, have been shown to improve nerve growth and brain development in humans with ADD/ADHD.[15]

Reviews of magnetic resonance imaging (MRI) studies show that long-term treatment with amphetamine salts (such as Dextroamphetamine) enhances functions in several parts of the brain and reduces abnormalities in brain structure and function observed in patients with ADD/ADHD.[16]

The effectiveness and safety of long-term use of amphetamine salts for the treatment of ADD/ADHD have been established through many clinical trials and reviews. For instance, several randomized controlled trials of uninterrupted stimulant therapy for ADD/ADHD treatment spanning two years have confirmed treatment safety and effectiveness.[17]

Two other clinical reviews have shown that long-term, continuous stimulant therapy for ADD/ADHD is effective for enhancing the quality of life and academic achievement, decreasing the core symptoms of ADD and ADHD (i.e., impulsivity, inattention and/or hyperactivity), and providing improvements in a large number of functional outcomes across nine categories of outcomes related to a social function, antisocial behavior, academics, driving, occupation, non-medicinal drug use, obesity, self-esteem, and service use (i.e., academic, financial, occupational, health, and legal services).[18][19] 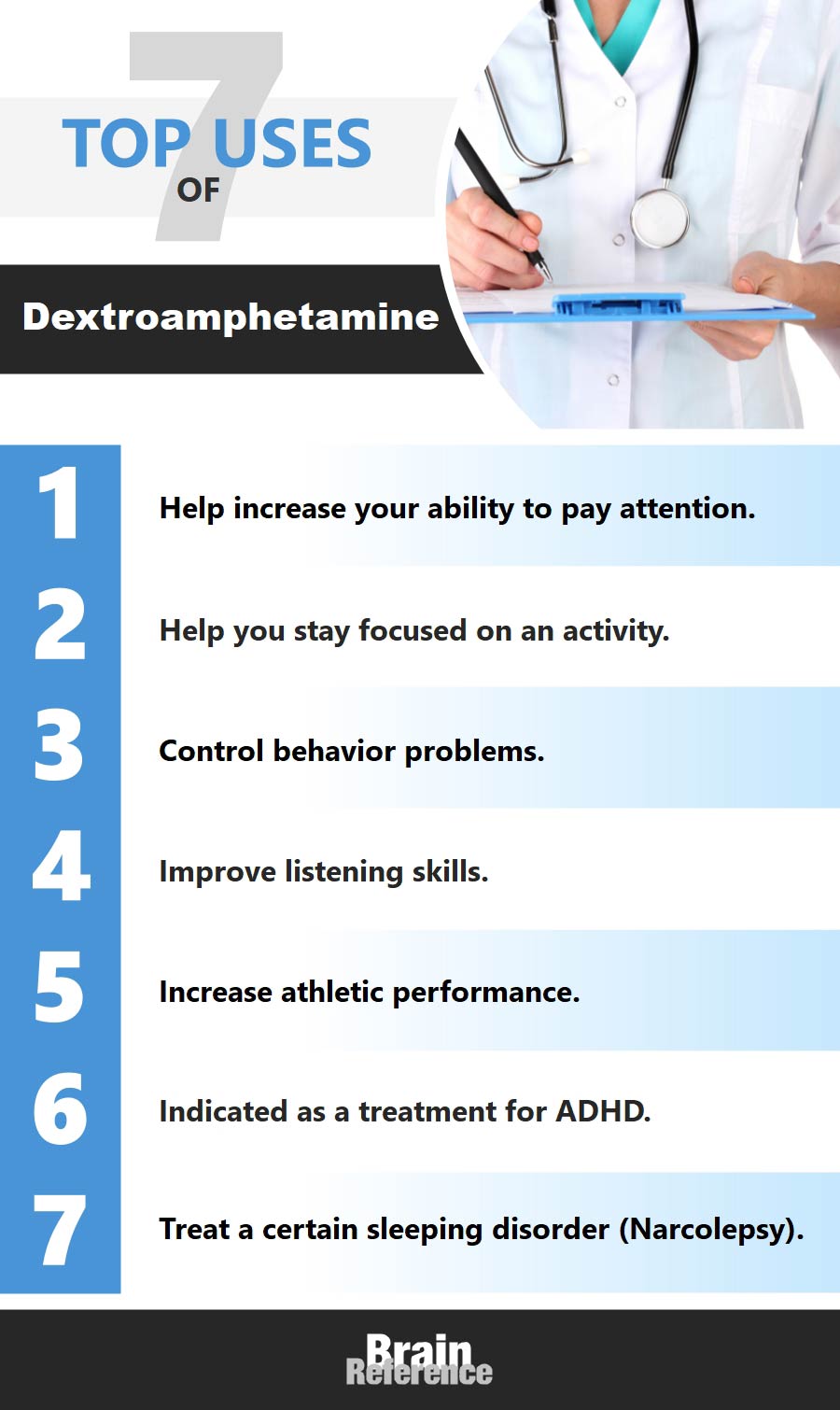 Serious side effects of Dexedrine (Dextroamphetamine):

Individuals having or knowing to have the following medical problems should not take Dexedrine:

Using Dexedrine with any of the following prescription drugs is not recommended. Your physician may choose not to prescribe you with this medication or change some of the other medicines you take.

Dexedrine (Dextroamphetamine) is a prescription medication. That means it can’t, and it shouldn’t be bought from unapproved stores. It is available, however, at most drugstores.

9) How Much Does Dexedrine Cost?

Dexedrine is a brand name drug. A month’s supply without insurance can cost about $350, depending on the frequency and dose.

Dexedrine is also available in the generic form Dextroamphetamine, which is less expensive than the brand name medication. Ask your physician and talk to your pharmacist about taking the generic form.

However, some people report that the generic version is not as effective, or they have side effects they did not have with Dexedrine.

Because Dexedrine (Dextroamphetamine) is a prescription drug, we can only review prescription medicines as potential alternatives. We don’t advocate substituting a treatment directed by your physician with an over-the-counter dietary supplement.

Vyvanse (generic: Lisdexamfetamine) is a stimulant prescription drug first approved in the United States on February 23, 2007.[24][25] Vyvanse is commonly prescribed in the treatment of ADD/ADHD and Binge Eating Disorder (BED). Lisdexamfetamine is potentially addictive, and there have been reports of serious cardiac side effects in adults and children.[26][27]

11) How to Take Dexedrine

If your physician prescribes you Dexedrine, the starting dose will oftentimes be between 2.5 mg and 5 mg per day. The treatment may need to be adjusted gradually, as your physician observes how well the medicine is working.

Dexedrine is available in several variations:

13) What Users Are Saying

"I was diagnosed with narcolepsy at the age of eight. I was taking 5 mg tablets that handled my situation. I was able to be an outgoing, loving child. My body was managing medication without falling asleep at inappropriate times." [Read full review]

"This medication is very good, I take it first thing in the morning two capsules of 10mg and one around noon, in precisely one hour I feel that hit, dopamine increasing in my brain, me being able to focus on everything and multitasks at one time," [Read full review]

"I was diagnosed with ADHD six months ago. I am 30 years old. My whole life has been a big problem with taking school, finance, and friendship seriously. I have, on the other hand, is a person with a good mood, charm, and with a sense of adventure." [Read full review]

14) Our Final Take On Dexedrine

From an effectiveness and safeness standpoint, Dexedrine is one of the better prescription drugs fro ADD and ADHD. However, each individual responds differently to medication; therefore, Dexedrine may work better in some than in others.

You may also experience adverse effects with Dexedrine that you don’t have with other similar prescriptions. Overall, amphetamine-based stimulants such as Adderall are more widely prescribed than Dextroamphetamine. That doesn’t mean you wouldn’t do just as well or better on Dextroamphetamine.

Ensure your physician has your complete medical history so he can make an informed recommendation and don’t hesitate to request a different dose or a different medicine if you’re not feeling proper symptom relief with the first one you try. 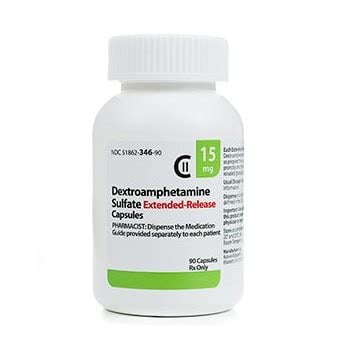 Customers Questions and Answers with Dexedrine

Dexedrine contains one active ingredient in the form of dextroamphetamine sulfate.

Q:
What is Dexedrine supplement?
A:

Dexedrine (generic: Dextroamphetamine) is a psychostimulant medicine commonly prescribed to treat ADD/ADHD in children and adults.

Q:
Is Dexedrine safe without dangerous side effects?
A:

Q:
What is the best place to buy Dexedrine
A:

As a prescription medication, Dexedrine is available for purchase at most pharmacies.

Q:
What is the cost of Dexedrine
A:

Dexedrine (brand name) for a month's supply without insurance can cost up to $350, depending on the frequency and dose.

Q:
What are the benefits of Dexedrine?
A:

There are a few benefits of using Dexedrine over other similar prescription medications. The most interesting benefit comes from the Spansule form, a sustained-release capsule specially formulated so that an initial dose is delivered promptly and the remaining substance is released slowly over an extended period.

Q:
Are Dexedrine benefits actually a reality?
A:

Dexedrine was not formulated as a brain-support supplement to enhance brain functions. Dextroamphetamine works by regulating chemicals responsible for impulse control and hyperactivity.

Q:
Can I take Dexedrine with a prescription?
A:

As with all prescription medication, we advise caution when taking Dexedrine with other prescription medication or over-the-counter dietary supplements. Drugs that may interact with Dexedrine include Tranylcypromine, Isocarboxazid, Safinamide, Furazolidone, Iproniazid, Methylene Blue, Selegiline, Moclobemide, Linezolid, Nialamide, Procarbazine, Phenelzine, Rasagiline, and Sibutramine.

Q:
Can I take Dexedrine with my daily multivitamins?
A:

Please note that many other prescription medications may affect the way Dexedrine works. The drug could also affect other medicines. It's imperative to let your physician know about everything you are taking before starting a treatment with this prescription drug. Potential dangerous interactions include any over-the-counter (OTC) medications, herbs, dietary supplements, and illegal drugs.

Q:
Does Dexedrine have a recommended daily dosage for children?
A:

Yes, Dexedrine (Dextroamphetamine) can be prescribed to children.

Q:
Are Dexedrine ingredients safe?
A:

Dexedrine contains Dextroamphetamine, an amphetamine salt that has been studied across multiple clinical trials and shown to cause mild, moderate, and, in rare cases, severe adverse effects in some patients.

Q:
Who should take Dexedrine?
A:

You should not be taking Dexedrine unless it was prescribed to you by a medical doctor.

Q:
Can I take Dexedrine if I'm pregnant or nursing?
A:

Q:
How should I take Dexedrine
A:

Q:
What is the fastest way of contacting Dexedrine customer support?
A:

You can contact the Amneal Pharmaceuticals customer support department by phone at (877) 835-5472 or (866) 525-7270, by email at drugsafety@amneal.com by using the Contact Us form available on their official website.

Q:
How can I return Dexedrine?
A:

As Dexedrine is a prescription medication, please discuss any possible returns or refunds with the doctor who prescribed it.

Most complaints gravitate around Dexedrine's many adverse effects, the many drug negative interactions, and its habit-forming properties.

Q:
What other people say about Dexedrine?
A:

Dexedrine's reviews are positive. On drugs.com (the leading authority for prescription drugs information), this prescription medicine has an average rating of 9.0 out of 10 (narcolepsy) and 8.5 out of 10 (ADD/ADHD).

Q:
What company produces Dexedrine?
A:

For the United States, Dexedrine is made by Amneal Pharmaceuticals.