CoQuinone 30 Review – Is it Effective?

Usana’s CoQuinone 30 is advertised as a blend of antioxidants designed to support energy production, cardiovascular health, muscle function, and healthy nerve function. The manufacturer Usana Health Science claims that clinical tests performed in Usana’s laboratories show that the formula can deliver CoQ10 in much higher quantities than solid formulations or competitive liquid formulations, making this product more bioavailable than other CoQ10 products.

Usana Health Science was founded in 1992 by Dr. Myron Wentz, Ph.D., a world-renowned scientist in microbiology and immunology. The company formulates and markets a range of nutritional supplements, weight management formulas, and personal care products claimed to meet the standards set forth by the pharmaceutical Good Manufacturing Practices (GMP). They’re also the same company behind Usanimals, a multivitamin for children, and Usana Procosa, a bone health supplement.

Usana CoQuinone 30 is recommended as a support for the optimal health of adults as they age.

Usana CoQuinone 30 is a combination of 2 ingredients: the Coenzyme Q10 and Alpha Lipoic Acid. Coenzyme Q10 or CoQ10 is found in the mitochondria of most cells in our body.

CoQ10 plays an essential role in energy production processes; therefore, high concentrations are present in the organs with the highest energy requirements, particularly the heart, kidney, and liver.

CoQ10 has also been shown to possess strong antioxidant properties. It can also regenerate and recycle another potent antioxidant in the body, particularly Vitamin E.

Because levels of CoQ10 decrease with age, the enzyme has been researched concerning ailment associated with aging. Encouraging results show it may reduce the rate of deterioration in the case of Parkinson’s disease and Alzheimer’s disease. Studies assessed that intakes of CoQ10 in patients with incipient Huntington’s disease symptoms could slow down the decline of functioning capacity.

However, further research is needed to determine the health benefits of CoQ10 supplements in humans. Coenzyme Q10 is generally well tolerated by most people, yet taken in high doses, and it can cause gastrointestinal problems.

A powerful antioxidant, Alpha Lipoic Acid or ALA is a fatty acid found in every cell in the human body. The fatty acid also plays a core function in energy production by helping turn glucose into energy.

Just like CoQ10, ALA can regenerate other antioxidants, including Vitamin C and Glutathione. ALA’s antioxidant properties make it efficient in alleviating ailments associated with free radical damage. Evidence suggests that Alpha Lipoic Acid may be beneficial in preventing stroke.

It may also be useful as part of dementia treatment and prevention, Alzheimer’s, or mild memory impairment. Side effects of ALA are rare and usually manifest as rashes.

Coenzyme Q10 is a natural substance produced by the human body whose primary role is to convert food into energy. It can be found in almost any cell of the body. Coenzyme Q10 is also a powerful antioxidant and has a role in helping other oxidants to regenerate.

Because of its importance in generating cellular energy, coenzyme Q10 also plays a vital role in enhancing the immune system.

A study showed that oral administration of coenzyme Q10 could increase mitochondrial brain concentration. The same study provided some evidence that coenzyme Q10 may have positive effects on neurodegenerative diseases.

A recent survey suggested that coenzyme Q10 could be as efficient as the treatment for Parkinson’s disease. Another similar study conducted on Alzheimer’s disease patients had also encouraging results regarding the effectiveness of coenzyme Q10 in neurodegenerative disorders. Although these studies are not yet confirmed, they represent a starting line for further research.

5) What You Need to Know Before Taking CoQuinone 30

CoQuinone 30 can be found on the company website, and it is rather expensive. This supplement is sold in bottles containing 56 capsules, and it should last one to two months, depending on the daily dosage used.

The manufacturer recommends taking one or two capsules of Usana CoQuinone 30 daily. There are no consumer testimonials of the formula posted online. No side effects or precautions are mentioned for Usana CoQuinone 30.

Aging is often related to oxidative stress, which has negative implications on various body functions, organs, and systems. Oxidative stress is one of the underlying causes of cardiovascular disease, several neurological or joint, and bone problems.

The body needs antioxidants to fight free radical damage. These antioxidants may come in the form of vitamins, enzymes, or other types of nutrients. Coenzyme Q 10 and Alpha Lipoic Acid are two of the most potent antioxidants, combined in a formula which is claimed to deliver much higher quantities of CoQ10 than solid formulations or other liquid formulations based on the enzyme.

Unfortunately, the manufacturer provides no details regarding the study on which these claims are based. Also, there are no consumer reviews posted online.

We hence recommend that you also ask the opinion of a physician before using Usana CoQuinone 30. 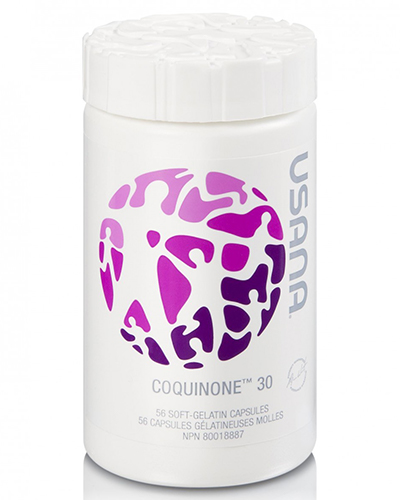 clear
Q:
What are the active ingredients in CoQuinone 30?
A:

Q:
What is CoQuinone 30 supplement?
A:

CoQuinone 30 is marketed as a dietary supplement that means to support the body's energy levels. Its core ingredients are alpha-lipoic acid and coenzyme Q10.

These are thought to be essential for all the body's processes during energy production. The manufacturer of this remedy is USANA Health Sciences. They state that the product also has an impact on muscle function, sound, cardiovascular health, and nerve function.

CoQuinone 30 is a USANA Health Sciences supplement whose leading role is to help maintain the body's energy. The main ingredients of this product are coenzyme Q10 and alpha-lipoic acid. Several studies claimed the efficiency of these ingredients.

I am 84 years old and I have MS. I take no drugs. I use 6 different products of USANA’s and eat a low glycemic foods. I am able to manage and control my symptoms with Nutrition, I feel better than I have felt in years.

I often have heart attacks. When I described them to my doctor, he told me that if I don’t want to medicate myself with drugs, I should try some nutritional supplements. One day, I’ve stumbled upon this one and I liked it so much that I never actually went to search for any other in my life.

coquinone 30 helped me with my hormonal imbalance. I usually have my period every 3 monts but ever since I consumed Coquinone 30, my menstruation became monthy. It is for Cardiovascular health and can also help combat fatigue. Please note that this is my own experience and yours could vary if you take it. :)

What happened to me was the opposite. My period was as punctual as the trains in Japan but after 2 months of taking this, it has become irregular and would last for almost 3 weeks. I’m taking it with cellsentials. I’m not sure if I should continue taking them.