Super Ubiquinol CoQ10 is an antioxidant molecule found naturally in our body that is required to convert fats and sugars into usable cellular energy. Super Ubiquinol CoQ10 contains three vital nutrients to boost energy production at the cellular level: super-absorbable ubiquinol CoQ10, shilajit, and PQQ. The resultant increase in energy supports these nutrients provide benefits to your brain, kidney, heart, and all the other tissues in your body which require high levels of energy to function optimally. The company behind this product is “Life Extension” who claims that their product features pure Ubiquinol form of Coq10 and does not contain sugar, soy, gluten or other types of allergy-inducing molecules.

Coenzyme Q10 (CoQ10) is an antioxidant that is necessary for basic cell function and healthy metabolism. CoQ10 levels naturally decrease with age and may be low in individuals with certain genetic disorders, diabetes, heart conditions, cancer, HIV/AIDS, muscular dystrophies, and Parkinson’s disease. Statin drugs are also known to deplete CoQ10 levels in the plasma, and possibly, tissues. For example, statin drugs reduce plasma CoQ10 by almost 45%; but the aging process itself reduces CoQ10 levels in the heart muscle wall by 76%.

CoQ10 in the body can be increased by taking a high-quality CoQ10 supplement (like Super Ubiquinol CoQ10). Life Extension offers this highly bioavailable ubiquinol form of CoQ10 in an advanced patented delivery system, providing an unparalleled absorption level.

Shilajit is a nutrient that has been shown to double the levels of CoQ10 in mitochondria. Combining CoQ10 and shilajit produced a 58% increase in energy production in the brain; 50% better than CoQ10 alone. It stabilizes CoQ10 in its active ubiquinol form and also facilitates more effective delivery of CoQ10 into the mitochondria, which results in greater production of cellular energy. Plus, shilajit itself is rich in compounds that help the mitochondria convert fats and sugars into ATP (adenosine triphosphate), the body’s main source of energy.

PQQ (pyrroloquinoline quinone) is another important nutrient in this formula that promotes the production and growth of new mitochondria. In fact, PQQ promotes youthful cellular function in three distinct ways; it promotes mitochondrial biogenesis, supports the immune system and has incredible antioxidant properties.

6) Bottom Line – Does It Really Work?

Super Ubiquinol CoQ10 contains pure CoQ10 that absorbs up to 8 times better and is essential for healthy mitochondrial function. This product is known to support cardiovascular health, maintain vital cellular energy production, promote healthy mitochondrial function and provide powerful antioxidant support. Life Extension claims that their supplement works by both prolonging the CoQ10 action and more efficiently delivering it to the mitochondria. 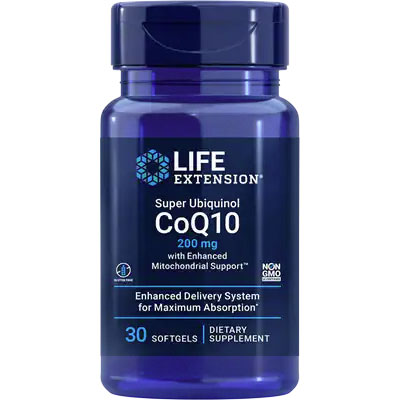