Advanced Neuro Boost produced by Nature and Life claims to be one of the most powerful physician-formulated nootropics available on the market at this moment. Among its claimed benefits we have: better memory, improved focus and clarity, mood support, and more energy throughout the day.

Based on a mixture of several well-known ingredients in brain supplementation (Ginkgo Biloba, St. John’s Wort, Bacopa Monnieri, DMAE, and L-Glutamine), Advanced Neuro Boost does look like a solid brain supplement that could provide some benefits when taken as recommended.

Sadly, there is a complete lack of information online regarding this product ®n particular and the manufacturer in general.

As stated above, what makes Advanced Neuro Boost different is the actual formula. The combination of amino-acids and herbal extracts is quite unique (although all ingredients are quite commonly used in brain supplementation). Looking at this formulation makes us think it may actually work. While we are not huge fans of herbal ingredients when it comes to brain supplementation (herbal ingredients cannot penetrate the brain blood barrier all by themselves), the inclusion of Acetyl-L-Carnitine and PS (Phosphatidylserine) is quite interesting and beneficial.

The label also shows the exact amounts of each ingredient used, which is another positive aspect we appreciate truly. Because herbs do not work the same, knowing the exact amount of St. John’s Wort, Bacopa Monnieri, or Ginkgo Biloba is key for establishing if the formula can or cannot work as advertised.

3) Is Advanced Neuro Boost Right for You?

What is interesting about Advanced Neuro Boost is the actual formula. This supplement was “built” around a mixture of amino-acids and herbal extracts that, in theory, should be more than effective in supporting better brain functioning.

Ingredients such as DMAE, Ginkgo Biloba, Vinpocetine, Huperzine A, Bacopa, Acetyl-L-Carnitine and PS (Phosphatidylserine) are extremely popular and used in most other similar supplements for brain health.

Moreover, this brand takes it a step further and lists the extract percentage of Ginkgo, Bacopa and St. John’s Wort. Not all herbs are created equally and this is one thing check when reviewing products based on multiple herbal extracts.

Advanced Neuro Boost does not contain caffeine, which is more than we can say about most brain enhancers. The addition of caffeine isn’t necessarily a bad thing as it can provide a solid short-term boost but caffeine can produce negative side effects.

As stated above, our research team was not able to find an official webpage for this product. The only claims we could find are those available on various 3rd party retailers (such as Amazon), claims that most likely came from the company itself. So according to these statements, Advanced Neuro Boost is one of the best brain supplements when it comes to your ability to focus on tasks. They also claim the formula is perfectly safe to use with no known side effects.

5) What You Need to Know Before Taking Advanced Neuro Boost

Advanced Neuro Boost is available in bottles of 30 capsules each for the price of $29.99 (discounts may apply based on store). At the recommended dose of 1 to 2 capsules daily, one bottle should be enough for up to 1 month of treatment.

7) How to Take Advanced Neuro Boost

Another thing that is worth mentioning is the lack of caffeine in Advanced Neuro Boost brain supplement. While most other similar formulations are taking the “easy way out” by adding huge amounts of caffeine to stimulate the brain, Advanced Neuro Boost takes a more “natural and safe approach”. Caffeine is an useful ingredient in certain situations but many potential consumers are sensitive to caffeine. On top of that, people can easily obtain their daily dose of caffeine by simply drinking a cup of coffee a day.

Does Advanced Neuro Boost work as advertised? The formula does look promising and there are quite a few testimonials online to support this. However, without any scientific research to back up these claims, it is almost impossible to say for certain that Advanced Neuro Boost is the brain supplement everyone needs. 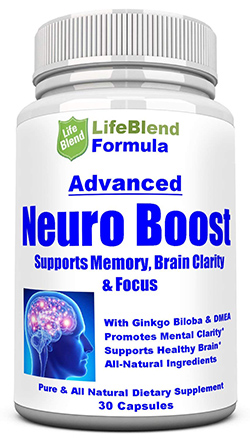 clear
Q:
What are the Advanced Neuro Boost ingredients?
A:

Q:
Are Advanced Neuro Boost benefits actually a reality?
A:

Advanced Neuro Boost does contain some interesting ingredients like Acetyl-L-Carnitine that have been proven to be effective at supporting better brain functioning. However, the lack of information regarding this formulation (and not just each ingredient separately) is concerning.

Can Advanced Neuro Boost provide some of the claimed benefits? Maybe. But as always we advice our readers to further research into this formula and, if possible, to consult with a medical doctor before taking the supplement.