AdreCor with SAMe Review – 6 Things You May Not Know

AdreCor with SAMe is a potent formula that provides strong methylation support to stimulate catecholamine production. The formula combines Quatrefolic, S-adenosyl-L-methionine (SAMe), and methylcobalamin, which promotes the synthesis of monoamine neurotransmitters (e.g., norepinephrine, dopamine, and dopamine) in the brain. It is designed and formulated by “NeuroScience” who claims that their product is a multivitamin approach that protects against fatigue and stress.

The supplement contains a massive dose of Vitamin C, Vitamin B6, and Vitamin B12, along with a proprietary blend that contains herbal extracts and amino acids. The critical amino acids in its composition are crucial in providing nourishment to the brain.

1) AdreCor with SAMe at a Glance

AdreCor is marketed as a multivitamin brain supplement specifically designed to support adrenal gland function, and thus promote healthy energy levels, improve memory and concentration, reduce anxiety, and combat fatigue and stress, commonly associated with adrenal gland dysfunction. The company behind this supplement is NeuroScience, a research-driven company committed to improving health by promoting the optimum functioning of the endocrine, immune and neurological systems. The fact that the manufacturers claim significant investments into innovation and tools used incorrectly assessing the right amount of ingredients is another key advantage compared to the traditional approaches of its direct competitors.

This herbal formula has many ingredients that support adrenal function, improve the body’s natural ability to cope with fatigue and stimulate the body’s energy levels. These ingredients include:

Amino acids such as L-histidine, L-methionine, and L-tyrosine which are believed to support the optimal functioning of adrenals.
Vitamin C that is believed to provide support to the immune system. This vitamin is also a potent natural antioxidant and can help combat free radicals in the body.

Magnesium is proved to support the work of the nervous system and development of immune system. This mineral has also been shown to help reduce oxidative stress and promote relaxation.

Rhodioa rosea extracts contribute to improving endurance and help the body to respond quickly to stress.

4) What You Need to Know Before Taking AdreCor with SAMe

AdreCor with SAMe supplement is claimed to work by increasing synthesis of several important chemicals known as hormones (Cortisol, Norepinephrine and Epinephrine) that influence body functions relating to both physical and emotional balance.

AdreCor is a brain enhancer formula that is used to promote energy, improve concentration and reduce fatigue. Individuals who have tried it, support the claims mentioned above. But there are also few reported negative side effects when using this supplement (a headache and heartburn), but most of these are manageable. It is a formula that can help improve memory and cognitive functions, therefore recommended to those individuals with low levels of norepinephrine, epinephrine, and cortisol. 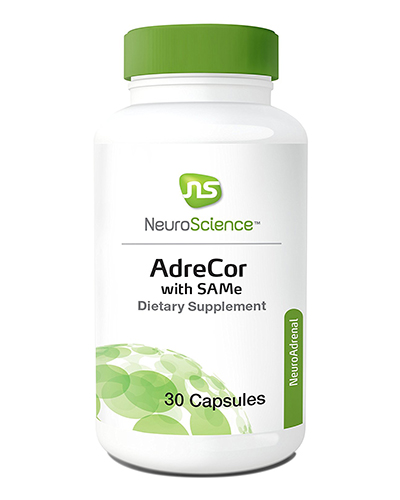