A-F Betafood is promoted as a homeopathic approach that uses various nutrients like beef juice, which is a natural betaine source, so supporting the health of fat digestion may occur. This remedy is provided to the nutritional market by a company called Standard Process.

The producing company was founded in 1929 by Dr. Royal Lee. Although they started out small with their office in Milwaukee, they presently sellapproximatelythree hundred products that are divided into three major categories, which are: Standard Process Veterinary Formulas, MediHerb, and Standard Process whole food supplements. This allows the company to address three needs and three categories of consumers. Each remedy was created specifically for a medical condition. On the other hand, there are some which claim to enhance general health, particularly those focusing on completing daily diets.

A-F Betafood was introduced on the nutritional field in 1951 and since then it offered help to people when it came to maintaining the levels of fat in the liver and supporting bowel functioning, bile production and proper flow in the gallbladder. In addition, the producer states that the mixture between the whole food and the vitamin complex promotes transport and metabolism of blood fats and sustains processing of fats inside the liver. Furthermore, beet and carrot root will offer naturally occurring antioxidants, vitamins, and betaine.

1) A-F Betafood at a Glance

A-F Betafood by Standard Processis advertised as a dietary supplement meant to improve fat digestion by sustaining normal processes of dietary fats and cholesterol-metabolism. Within the whole foot beet components contained by this remedy, there are two phytonutrients that are called betalains and betaine which are often regarded as important for the human body because they are directly involved with support and protection of the liver.

Introduced on the nutritional field in 1951, A-F Betafood is distributed in bottles that contain either 90 or 360 tablets. Because the suggested daily intake is of two tablets per meal, one bottle can be enough for either one month and a half or a six-month treatment. It can be purchased at moderate prices either from the manufacturer web page or other online retailers. However, its price may vary depending on the retailers, and people usually find it cheaper when the amounts bought is larger. Standard Process provides no international shipment. Thus people should seek to buy it on other retailers.

6) How to Take A-F Betafood

Research revealed that betalains are the pigments generally found in beets that are protective of the colon as well as the liver. In addition, they help the human body protect itself against oxidative stress damage. Animal and laboratory studies have revealed that betaine is able to protect enzymes, proteins and cells from environmental stressors, thus sustaining metabolic functions of the liver and the entire body. Betaine has a slightly interesting story. In 1993, it was banned from the OTC list of products due to the fact that there wasn’t enough evidence to classify it as a “generally recognized as safe and effective.” Specifically, it can be utilized to treat medical conditions such as abnormality low potassium levels, hay fever, diarrhea, food allergies, gallstones or ear infections. There isn’t enough information about potential side-effects that may be caused by betaine based supplementation.

Promoted as a dietary supplement that provides improvement for the fat digestion, A-F Betafood contains a series of components like phytonutrients and vitamins which should sustain or enhance the health of the liver. Moreover, because of some of its ingredients, it should provide protection against oxidative damage that generally comes with environmental stress. In addition, the cholesterol balance is improved, thus weight loss may also be experienced while following this treatment. Further studies are required in order to state its general effectiveness, but no A-F Betafood side effect has been reported so far. Unfortunately, vegans and vegetarians have to seek for another approach since this product contains animal extracts. 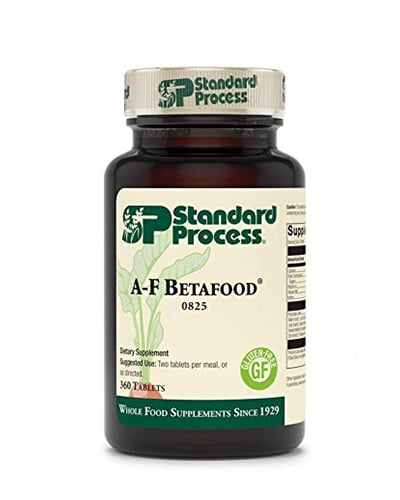 clear
Q:
What are the active ingrediens in A-F Betafood?
A:

Q:
A-F Betafood is all about what?
A:

A-F Betafood is presented as a dietary supplement that uses a variety of nutrients such as beet juice in order to support fat digestion. It was designed by Standard Process and introduced on the market in 1951. It is recommended for people who want to lose weight and need some type of supplementation form to achieve their goals.

Other benefits include regulation of bowel function, maintaining healthy liver levels, and offering support for the normal processing of fats and for the support of cholesterol metabolism. The Manufacturer claims that it contains a mixture of key ingredients from Cataplex F, Cataplex A, and Betafood, three other popular formulations offered by the same company.

Q:
Are A-F Betafood benefits actually a reality?
A:

Presented as a dietary supplement that offers enhancement for the fat digestion, A-F Betafood features a series of ingredients such as vitamins or phytonutrients which should support the health of the liver. Furthermore, due to some of its components, it should offer protection against oxidative damage that usually comes because of environmental stressors. Additionally, the cholesterol balance should be improved. Therefore weight loss may be experienced during this treatment. Further research is required to determine its general Effectiveness, and no side-effect has been reported until now. Unfortunately, vegetarians and vegans have to search for a different approach since this product was not particularly designed for them.

I started this about 6 months ago and definitely noticed a change in my bowel function . Now 6 months later I am getting a lot of diarrhea. I’m not sure if I should stop completely or take less. I take 3 in the morning and 3 at night by doctors advice.

Title for your comment
Diarrhea
Have you tried this product?
Yes
Reply
Victoria

I added it to my other supplements. AF Beta Food has been very helpful in evening out my digestive system functioning as well as my bowel function.

Title for your comment
Help from AFBetafood
Have you tried this product?
Yes
Reply
Debi

What is the shelf life of this product? My acupuncturist sold me a bottle and the pills are almost black and are crumbling. I think they might be harmful.

Title for your comment
Old Stock?
Have you tried this product?
Yes
Reply
Cyn

I completed the SP cleanse under the care of a nutritionist and felt amazing after, until she added the A-F Betafood supplement…Immediately after taking it I experienced severe Diarrhea, so I stopped all supplements under her direction until it cleared up. The diarrhea subsided and under her care started back on supplements including A-F Betafood, and within a few hours, I was vomiting and had severe diarrhea, so did not take it again for a week and the same thing happened. I have not eaten beef/cow in over 10 years and read the label to discover it has animal Bovine parts, which I feel like is the culprit of my severe reaction to the AF Betafood supplement. I’m sure it works for most but if you have an averse reaction to beef beware!

What kind of nutritionist did you see that allowed you to take AF Betafood after not consuming beef for a decade!? It has bovine all over the ingredient list….thats pretty bad. I wouldn’t be going to that person anymore. Assuming he or she knew that you were not consuming red meat….which that’s the most basic part of their job. Yikes! Hope you found a good solution! This pain is no joke!

This is a great product for someone with digestive problems related to lack of sufficient bile production, as I have been.

This product is wonderful with helping gallbladder sludge. I used A-F Betafood to ward off the pain of gallbadder attacts in between tests. It also helped me with digesting foods that I could not ordinary eat.

I have been taking this product for about 6 months. Prior to starting this, I was having issues with my gallbladder ( pain, diarrhea, gas) on the road to having my gallbladder removed. Since being on this product after 1 month had had a complete GI turnover! Gallbladder pain gone, gas, indigestion and frequent diarrhea gone!! I can feel good about going out with friends and not having my Colon rumble in anticipation of needing to find a bathroom. I think it could help with colitis. I am a nurse and not a push over, but this product has worked for me!

I felt good about taking this product. However, it began to create a sour taste in my mouth. Then one day, I had facial flushing. I decided to follow my instincts and discontinue taking it. Sure enough, the side effects went away. I have a feeling it was related to the beets. Anyway, I hope to replace this product with one of the other SP products for cleansing the liver & metabolizing fats.

How long do you have to take A-F beta food to achieve results? Can you ever quit taking it.?

A-F Betafood made by Standard Process is advertised as a fast-acting dietary supplement. However, most users have reported the first results after 30 to 40 days of use.