Jigsaw Ultimate Review – Is it Effective?

Ultimate is advertised as a dietary remedy that mixes a wide array of ingredients with the purpose of properly nourishing the entire human body on a regular basis. Even though it’s presented as a help for the whole organism, its components often target a specific areas like cardiovascular, immune, or nervous systems. The company that manufactures and further sells this product is called Jigsaw.

The reason behind the establisher’s choice for the name is the fact that finding and treating symptoms of some diseases or the actual cause is like a puzzle. The business was founded Arizona in 2005 and seeks to provide innovative products of high quality to the customers. They have had more than ninety thousand clients and somewhere around eighty percent of them have returned for more, as some statistic present. As compared to other companies, they use a sustained release technology for some of their products which target a slower absorption of components, but with an increased efficacy rate.

Ultimate contains ten essential blends that are the main composition of other remedies sold by them. It is mainly suggested for females and males with a harsher schedule that doesn’t allow them to eat properly as well as elders whose bodies have started to be affected by cognitive and muscular degradation.

As a multivitamin formula with additional minerals, herbal extracts, and probiotics, Ultimate can be taken by people of all ages in order to improve a multitude of areas and organs such as brain and heart. Even though as a whole it targets general well-being, each of its components is known to have a positive impact on a particular function or organ.

Among its components, there is CoQ10. Research points out that this ingredient represents a part of almost all human cells and is needed in the energy production processes. Hence, it is required in growth and development processes and may also reduce oxidative damage because it acts as an antioxidant, thus preventing certain inflammations or infections. Its core usages include periodontal disease, heart failure and muscular dystrophy. There are some people who take it to lessen some drug effects on the heart, muscles, or other organs. The CoQ10 usage may lead to mild insomnia if the daily intake isn’t followed according to the label description.

2) What Are Jigsaw Ultimate Ingredients?

Representing a multivitamin formula with added minerals, herbal extracts, amino acids, and probiotics, this product seeks to cover daily nutritional charts for people of all ages. Within its ingredients, there are some which are a usual part of a natural remedy due to their beneficial properties. For instance, CoQ10 is found reliable amounts in this product.

Research revealed that this ingredient is a part of almost all human cells and required to produce energy within the organism. Therefore, it is needed in the growth and development processes and may also lessen the oxidative damage due to having antioxidant properties that help avoid certain inflammations or infections. Its main utilizations include periodontal disease, muscular dystrophy, and heart failure. Some individuals take it to minimize some drug effects upon the muscles, heart, and other organs. The CoQ10 consumption may lead to mild insomnia if the dosages aren’t properly followed.

Another component of this formula is Curcumin. This is the main curcuminoid of the Indian spice turmeric, a plant from India. Curcumin has a role in the inflammation reduction. There were several studies which suggested that it may help ease symptoms of rheumatoid arthritis and osteoarthritis. However, further research is needed in this field. Potential side-effects of its consumption are diarrhea and nausea.

There are online customer testimonials about Ultimate. What is being reported includes comments like this:

5) What You Need to Know Before Taking Jigsaw Ultimate

This remedy is found for purchase on the official manufacturer site. However, there may be situations in which other online retailers may have it for sale. Its price is viewed as affordable overall. A pack is composed of sixty servings, but because two servings are required on a daily basis, it is sufficient for a month. It also comes with a ninety-day money-back guarantee for customers who weren’t content with the results.

For packs of three and six months, the producer offers the considerable price reduction to help people enhance the duration of their treatment at more affordable cost.

Another ingredient of Ultimate is Curcumin. This is in fact the main curcuminoid obtained from the Indian spice turmenic, an herb from India. Curcumin benefits generally include reduction of inflammations on a number of levels. There were some studies that suggest it may help ease symptoms of rheumatoid arthritis as well as osteoarthritis. Curcumin weight loss reviews also seem to support the hypothesis that the extract may prevent re-growth of fat after a weight loss process. Curcumin cancer benefits may also be associated, however for most of these claims there is a stringent need for additional research. Possible Curcumin side effects of its consumption are diarrhea and nausea.

Ultimate is promoted as a dietary supplement that features a wide array of components from vitamins to probiotics and minerals. All of them are found in proper quantities and if the consumption is limited to two servings per day, there is no excess included. However, if someone wants to take more for faster results, he/she should consult a personal physician. There are few to no Ultimate side effects during treatment if the intake is the suggested one. The product should be kept out of children’s reach. Compared to other remedies, some of its components are provided through sustained release technology which means that although the absorption rate is slower, it is more effective. 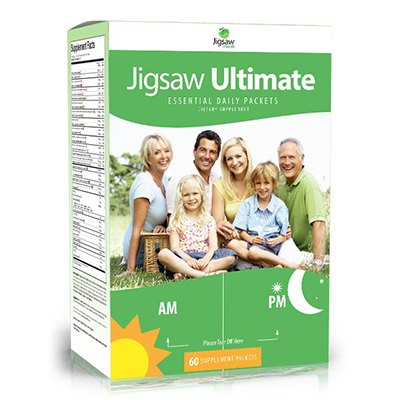 clear
Q:
What are the active ingredients in Jigsaw Ultimate?
A:

Q:
What is Jigsaw Ultimate?
A:

Ultimate represents a natural remedy that features a multitude of vitamins, minerals, herbal extracts, and probiotics and targets the health enhancement of the entire organism. It is destined for adult-usage mainly and helps release stress while also protecting the body against oxidative damage. Therefore, it is useful for cardiovascular, immune and nervous system. It comes with a ninety day money-back guarantee which means they provide products of good quality.

Ultimate represents a dietary supplement which features a wide array of ingredients from vitamins to minerals and probiotics. All of them are found in reliable quantities, and there is no excess included if the consumption is limited to two servings per day. On the other hand, if someone decides to take more due to wanting faster results, he or she may consult a personal doctor. There are few to no side-effects attached to its consumption if the dosage is the recommended one. The main difference between this supplement and others similar is the sustained release technology which was included for some of its ingredients and makes the assimilation more efficient.

I’m quite satisfied with this product. Although I was skeptical at first.. it showed me I can take them without any problem. I like the company so far and I’ve used more than three products from them