Think Clear is advertised as the most advanced cognitive support formula available on the market. Its manufacturer, Pro-Health, is a company founded in 1988 which manufactures treatments and formulas targeting a large number of health issues ranging from memory and brain supplements to kidney health or cholesterol products.

According to the manufacturer, the formula is a four ingredients mixture of Ginkgo Biloba, Huperzine A, DHA, and Vinpocetine which synergistically work together to enhance circulation and oxygen flow to the brain, therefore promoting optimal cell health and supporting information transmission from cell to cell.

These four core ingredients have been extensively researched and proven, to different extents, to positively impact memory and cognitive functions.

Although the manufacturer does not mention who the product is supposed to help specifically, it does issue a restraint for patients under blood thinners or who have a history of heart attacks/strokes, as well as for people under the age of eighteen, pregnant or lactating women.

Huperzine A is a substance purified from a plant called Chinese club moss and is the result of a lot of laboratory manipulation. The substance is commonly used in the treatment of Alzheimer’s disease, and for memory and learning enhancement, as well as to counteract the effects of age-related memory impairment. Huperzine A works by increasing levels of acetylcholine, a neurotransmitter essential for the functioning of the Central Nervous System.

Ginkgo Biloba acts as an antioxidant and is commonly used for its ability to enhance circulation throughout the body and brain, thus making oxygen available to the brain and other organs.

Vinpocetine is an extract of the Periwinkle plant. It is believed that it has the ability to enhance blood circulation in the brain; therefore it is commonly used in products aimed at treating conditions that affect learning, memory and information processing skills caused by aging.

The manufacturer issues a warning for people on blood thinning medication, people under the age of 18, pregnant and nursing women, otherwise, it does not mention any potential side effects. Individual ingredients, however, have been linked to side effects.

3) Does Think Clear Work and it is Safe?

Advertised as a natural supplement recommended for people who desire to enhance their mind functions, Think Clear represents an alternative to medication. It is composed of four ingredients with individual known properties. One of these compounds is DHA, which is short for Docosahexaenoic acid. It represents an Omega-3 fatty acid and is important for the membranes of cells in the brain. The effect of DHA on children is an enhancement of cognitive functions and neuronal development. However, when it comes to elders, it decreases improvement of diseases which are neurodegenerative. Deficiency of DHA may lead to deterioration of neuronal cells that may lead to mental disorders.

Thus, it is mandatory to maintain an appropriate level of DHA in the human body. Side effects of DHA usage, especially if the standard dosage has been exceeded, are rashes, swellings, difficulty breathing and swallowing and signs of internal bleeding.

Another reliable component is Ginkgo Biloba. Traditionally, Ginkgo Biloba leaf extract has been used in the treatment of vascular system disorders and to enhance memory. Due to the ginkgo leaves blood thinning properties, the oxygen being delivered to the brain increases quantitative, thus increasing memory, preventing headaches and other poorly functioning brain functions caused by low oxygen levels in the brain.

Several studies found that Ginkgo Biloba might have a positive effect on Alzheimer’s disease due to its capacity to delay the symptoms of dementia. However, other studies found that ginkgo has little to no effect in regarding this matter which makes the given results mostly inconclusive. Ginkgo Biloba is still being researched to prove or disprove its effects.

There are online testimonials about Think Clear. What is being reported includes the following:

4) What Think Clear Does?

5) Precautions of Think Clear Use

People can purchase Think Clear by 60 capsules bottles from manufacturer website or other online retailers. Its price can be viewed as a little expensive when bought by a single bottle, but because retailers offer discounts, its price is affordable. A bottle is sufficient for a month treatment.

The recommended daily dosage is 2 capsules taken with meals.

Think Clear is one of the many formulas on the market advertised as a natural cognitive functions support. The ingredients are four of the most popular herbal ingredients available today. The manufacturer does not detail any differentiation points of Think Clear in comparison to products claiming similar benefits. Consumer testimonials do however praise the formula’s effectiveness, although the combination has not been tested so far.

The product does not contain gluten or sugar making it a viable choice for people with diabetes or gluten sensitivity. Still, for precautionary reasons, it is our strong recommendation that a specialist is consulted prior to beginning treatment. 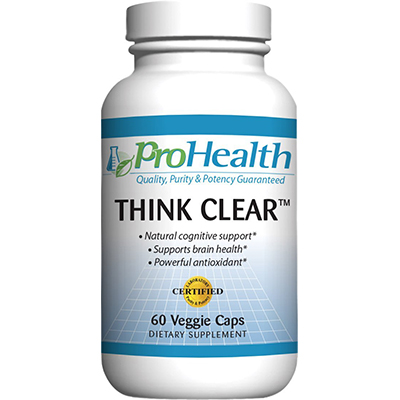 clear
Q:
What are the core ingredients in Think Clear?
A:

Think Clear is advertised as a powerful blend of amino-acids and plant extracts working to improve memory, cognitive functions, aid the bloodflow of the brain and the circulation entirely. Think clear is offered to you by ProHealth. The main active ingredients are DHA (extracted from algae oil) which works with Huperzine A and Vinpocetine (which are other two plants extracts) in order to improve memory and nourishing the bloodflow of the brain, therefore increasing the brain functions considerably. This product also contains Ginkgo Biloba leaf extract which is well known for its positive effects on the brain. Due to its powerful ingredients blend, Think Clear might be a solution for Alzheimer's patients and possibly ADD/ADHD.

Think Clear represents a combination between four ingredients, and its aim is to improve mind functions, such as memory, attention, and focus. Three of these ingredients are herbal extracts, and the other one is DHA, an Omega-3 fatty acid. Although little is known about the Effectiveness of this combination, customer testimonials promote is as effective. When taking this supplement, people may experience some unwanted side effects. For proper results, it is important to keep in mind that this is only a supplement and it does not replace a healthy lifestyle.