Phosphatidyl Choline is a brain supplement marketed as an aid in enhancing overall cognitive abilities, such as memory, concentration, learning and alertness.

Phosphatidylcholines are a class of phospholipids and a main component in human body cell membranes. The term is sometimes used interchangeably with “lecithin,” although the two are different (phosphatidylcholine is in fact a component of lecithin).

The manufacturer claims the supplement contains 3 times the Phosphatidyl choline found in ordinary lecithin, although it does not back-up the statement with research or empirical evidence, nor does it explain how the product is supposed to work to promote the benefits claimed.

The manufacturer is Source Naturals, a company set up 1982 which manufactures a variety of nutritional formulas that promote general well-being.

Phosphatidyl Choline contains the active substance phosphatidylcholine, which the body uses to produce acetylcholine, a neurotransmitter with an important role in the functioning of peripheral nervous system (PNS) and in the central nervous system (CNS). The substance can be found in food such as eggs, sunflower, soybeans, mustard and other foods.

Inconclusive research has shown phosphatidylcholine can be used in the treatment of memory loss, anxiety, manic-depressive disorders and even Alzheimer’s disease.

Phosphatidylcholine may be administered orally or by injection. It is considered safe when used short-term; however the long term usage implications and effects are not known.

Some of the most frequent side effects when taken orally include excessive sweating, stomach problems, and diarrhea. Special precautions refer to pregnant and breastfeeding women or women planning on getting pregnant.

2) What Are Phosphatidyl Choline Ingredients?

3) Does Phosphatidyl Choline Work and it is Safe?

Source Naturals Phosphatidyl contains only one active ingredient, Phosphatidylserine. Evidence shows that this substance can speed up the recovery, prevent muscle soreness, possess certain regenerative properties in athletes and can improve wellbeing.

Phosphatidylserine is commonly advertised as a cognitive enhancer, but there is little evidence to support these claims. FDA has conducted a clinical study that concluded that there is not significant scientific agreement among qualified experts that a relationship exists between reduced risk of cognitive deterioration and Phosphatidylserine. However, FDA did give “qualified health claim” status to Phosphatidylserine. According to them, this substance may be useful in reducing the risk of dementia in the elderly.

Source Naturals Phosphatidyl daily recommended dose is one capsule, twice per day. Each capsule contains 100 mg of Phosphatidylserine. Women who are pregnant or nursing should talk to their doctor before using this supplement. This supplement is not recommended to anyone using MAOIs or any other form of prescription medication.

You cannot purchase this supplement directly from the manufacturer, but there are several online retailers for it. The shipping cost will vary based on your physical location.

The daily recommended dose of Phosphatidyl Choline is one to two capsules.

8) Our Verdict on Phosphatidyl Choline

Phosphatidyl Choline is based on the active substance phosphatidylcholine as single main ingredient. The effectiveness of the generic substance as a brain functions enhancer is not sufficiently researched and no scientific clear conclusions have linked the substance to any cognitive functions enhancement. Also, consumers must be aware that some side effects have been associated to the substance.

Be that as it may, consumer reviews on the Phosphatidyl Choline are generally positive, the main benefits mentioned being increased mental sharpness and clarity.

The manufacturer enjoys a good reputation and over 30 years of business experience and their products seem to be trusted by consumers.

For precautionary reasons, we recommend the advice of a healthcare provider prior to starting treatment. 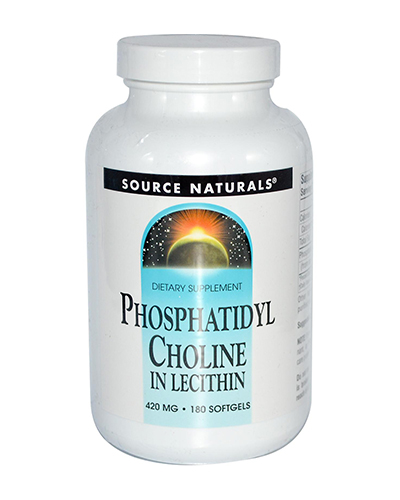 clear
Q:
What are the core ingredients in Phosphatidyl Choline?
A:

Q:
What is Phosphatidyl Choline supplement?
A:

Source Naturals Phosphatidyl is an amino-acid supplement meant to enhance overall cognitive abilities: learning, memory, alertness and focus. It contains Phosphatidylserine, a substance that can speed up recovery, prevent muscle soreness, possess certain regenerative properties in athletes, improve wellbeing and is commonly used also as a cognitive enhancer, especially in Alzheimer's patients. This product is offered by Source Naturals.

Q:
Are Phosphatidyl Choline benefits actually a reality?
A:

The company behind this product is a company with a excellent reputation among its customers. However, there is little information about Source Naturals Phosphatidyl.

The Effectiveness of Phosphatidylserine as a cognitive enhancer isn't fully proven, and many scientists believe there is no connection between this substance and reduced risk of cognitive deterioration. Therefore, we advise our readers to be careful and consult with their doctor first. Source Naturals Phosphatidyl may be effective, but all options should be studies before making a final decision.

I have been using this product for 6 years, and it\’s worth it. Have memory deficits acquired by a head injury, but this noticeably and measurably improved it. Neurological assessments measured an improvement in memories of things like lists of words, and fMRIs showed that a combination of this and computer training made parts of my brain multiple times more active. And at work, supervisor gave me good feedback 2 weeks after I started using it without me telling him I was using it.