Bach Rescue Pastilles is a natural brain supplement based on the alternative therapy principles set by Dr. Edward Bach. The formula is manufactured by Nelson Bach, one of the largest manufacturers of natural dietary supplements in U.K. The Rescue Remedy line developed by the company is based on Dr. Bach’s belief that by treating the mind and negative emotions, the body too will heal in a natural, non-invasive manner. The Rescue Remedy products are designed to be used during crisis situations and are based on the healing powers of five plants. Bach Rescue Pastilles is useful for stress management and tension relief.

Nelson Bach was established in 1860, with its first U.S. office being inaugurated in 1995.The main benefit claims, although not specifically advertised as such include promoting a sense of overall comfort and calmness, rational thinking, courage and focus duringstressfulsituations.Bach Rescue Pastilles is claimed to be suited for all family members, including children. Pregnant and breastfeeding women are advised to consult a healthcare professional before using the formula.

Star of Bethlehem for instance is claimed to have curative effects in case of trauma and shock, and is recommended to be used by people who have received distressing news or have been involved in an accident which resulted in grief or pain. It may hence be effective in alleviating symptoms of post traumatic stress disorder and other emotional disturbances associated to shocking circumstances. Star of Bethlehem is considered unsafe. The plant contains potent chemicals called cardiac glycosides, chemicals similar to the prescription drug digoxin which may cause life-threatening side effects (heart arrhythmia).

Impatiens is generally recommended against tension, irritability and fidgety. People who may find Impatiens helpful are those who are easily irritated and tense and who may experience some kind of pain (muscles for instance) as a result of anxiety, lack of patience or rushing. Impatiens may prove beneficial for cases of ADHD (Attention Deficit Hyperactivity Disorder) or ADD (Attention Deficit Disorder). Little scientific evidence is however available on the herb. Side effects are also unknown.

3) Does Rescue Pastilles Work and it is Safe?

The formula revised here is an herbal remedy advertised to have powerful stress-relieving properties. The main ingredients of the formula include plants such as Star of Bethlehem, Common Rockrose, Cherry Plum, and Clematis, all known for their benefits in promoting mental clarity and calming effects or intervening in shock and panic attack management.

Rockrose is one of the most popular ingredients used in Dr. Bach’s therapies. It appears that the plant can assist with extreme emotional imbalance during panic or irrational terror attacks. Rockrose is recommended in situations in which the patient feels hopeless and powerless. Those who support its beneficial effects claim that Rockrose can turn terror into courage and promote a more relaxed and healthy mindset. Still, there is a general lack of scientific research to support the therapeutic properties of Rockrose. This is why its side effects or potential drug interactions have not been systematically studied and are still unknown.

Clematis is described as an active support for mental acuity and is claimed to have the ability to clear the brain during a crisis, hence assisting with thinking and decision making when faced with stress or pressure. Scientifically documented information on Clematis is also unavailable. The plant may produce a series of potentially dangerous side effects, including inflammation and burning of the digestive tract and mouth, irritated kidneys, and bloody urine. It is recommended that Clematis is taken under the supervision of a qualified healthcare professional.

Bach remedies are not supported by conclusive evidence. The manufacturer warns that excessive consumption may cause mild laxative effects and recommends caution for pregnant and lactating women. The recommended daily dose is one capsule.

There are testimonials posted online about Bach Rescue Pastilles. What is being stated include:

The supplement comes in a tin can with 24 tablets (a 24 days supply). Each can comes at a relatively low price, making the formula an affordable supplement. The formula is available for purchase in health food stores and through various online retailers. The product is also sold directly through the manufacturer’s website. There is no information on any money-back guarantee or return policy with any of the online retailers.

The Bach Floral Therapy was developed in the beginning of the 20th Century and is based on the philosophy that emotional and mental health is directly related to physical health. The remedies included here hence aim to treat emotional and mood negative manifestations, with the purpose of healing physical illness. Bach Rescue Pastilles is advertised to fight stress symptoms and help people cope with tension and nervous situations. There is limited research on the ingredients of the formulation, while some of them are believed to have harmful adverse effects in some situations. Alternative medicine should not substitute real treatment, especially for conditions as serious as those related to stress. We strongly advise that you consult a healthcare specialist before using Bach Rescue Pastilles. 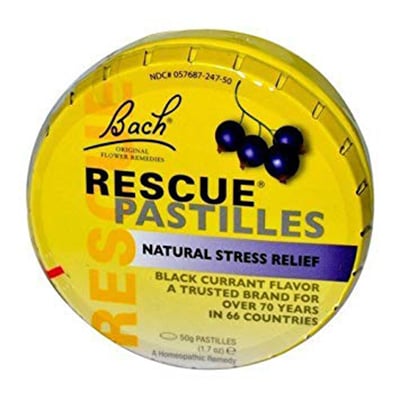 clear
Q:
What are the active ingrediens in Rescue Pastilles?
A:

Q:
What is Rescue Pastilles supplement?
A:

Bach Rescue Pastilles is an herbal supplement based on the principles of Bach Floral Therapy. The manufacturer Nelson Bach claims the supplement is a safe, non-addictive and effective stress relief formula. Although the alternative medicine therapy enjoys much popularity, actual scientific evidence to support its evidence could not be found. The main ingredients (Star of Bethlehem, Clematis, Rose rock, Cherry Plum and Impatiens) may assist with symptoms of ADD, ADHD, post-traumatic stress disorder, panic attacks or any ailment which triggers irritability, tension, shock and impatience. Bach Rescue Pastilles is recommended with caution to pregnant and lactating women.

Q:
Are Rescue Pastilles benefits actually a reality?
A:

Bach Rescue Pastilles is a natural flavor, non-habit forming and sugar-free stress-relieving formula. However, the research on the formula's ingredients is rather limited. Moreover, some of them may produce far-reaching side effects (for instance Clematis), which should be acknowledged before use.

While this is marketed as a natural alternative and first-aid therapy against stress, it should not replace or delay professional help. Product reviews on the formula are positive while consumers praise its Effectiveness in coping with stress, panic attacks or post-partum depression.

We highly recommend that you seek the advice of a healthcare professional before use, to avoid any unwanted side effects and make sure of receiving the optimum treatment.