Neuroplex represents a natural remedy featuring a spectrum of minerals, vitamins and complementary tissues designed with the purpose to enhance cognitive functionality and endocrine system activity. This means that people who consume this supplement manufactured by Standard Process should observe a boost in concentration, memory and focus. Although its main target is the improvement of nerve connections, the manufacturer presents this product as being reliable for the endocrine gland as well in the sense that its proper functionality should be supported by containing ingredients.

The business behind this dietary supplement was set up in 1929 and seeks to deliver good products at affordable prices. They claim that the company’s core focus is on both the ingredient that are chosen for their remedies as well as on the manufacturing processes that lead to the final product. The man behind the company is Dr. Royal Lee and his philosophy is that ingredients should be delivered to people as natural as possible. The company currently sells over one hundred products which are divided into three major lines: Standard Process, MediHerb and Veterinary Formulas.

Neuroplex was released on the market as a cognitive enhancement natural supplement in the year 1986. The product contains a series of minerals, vitamins and complementary tissues that are carefully chosen to fulfill the daily requirements in order to ensure memory, concentration, attention and focus boosting effects. Furthermore, due to some of its components, the manufacturer also suggests its use for those who want to properly support the health of their endocrine gland.

A specific feature of Neuroplex relies on the fact that it has a proprietary blend with bovine, ovine and porcine extracts as well as ascorbic acid and para-aminobenzoate. The reason of their inclusion is based on what is known as “glandular therapy” which states that dried animal endocrine gland tissues are used to treat a variety of medical conditions. The basic premise of this therapy that has been used for centuries is “like heals like”.

Introduced on the nutritional field in 1986, Neuroplex is presented as a dietary supplement that seeks to enhance cognitive functionality by providing a broad spectrum of minerals, vitamins, and complementary animal tissue extracts. Although the main target of the product is the improvement of cognitive areas such as concentration, focus and short- and long-term memory, the manufacturer states that it also has a positive impact on the health of the endocrine gland.

The product features a proprietary blend that contains a broad range of complementary tissues such as Tillandsia usneoides that has been introduced due to its hormone precursors content as well as vitamin E complex. Furthermore, the hypothalamus, pineal, anterior pituitary and brain PMG extract should provide support to the corresponding tissues in humans.

However, one of the supplement’s main components is vitamin B6. Also known as pyridoxine, this vitamin is naturally found in some foods like beans, vegetables, cereals, eggs, and meat. It is mostly needed for the proper processing of fats, sugar, and proteins in the organism. Recent studies revealed the importance of this ingredient in the proper development of the brain and nerves. Considering this, companies have included B6 in supplements designed to help with symptoms of attention deficit-hyperactivity disorder, Alzheimer’s disease and related nerve pain, headaches, and migraines. While is it viewed as safe when consumed in recommended dosages; some side-effects can appear in some individuals which include headaches, loss of appetite, vomiting and stomach pain.

There are online customer testimonials about Neuroplex. What is being reported includes the following:

5) What You Need to Know Before Taking Neuroplex

This product is found for sale in bottles that each feature 40 capsules. Because the serving size is two capsules per day, a bottle usually lasts for 20 days. These two capsules supply somewhere around 30 mg of the bovine hypothalamus, 25 mg bovine anterior pituitary and 180 mg Tillandsia powder. One may find this product for sale either on the official manufacturer website or from other online distributors. Its price is viewed as affordable in comparison to similar supplements. There is no mentioning of a money-back guarantee or sample availability, free of charge or not.

On the other hand, one of the main ingredients found in Neuroplex is niacin. Most commonly known by the name of Vitamin B3, this component is usually consumed for Alzheimer’s disease, age-related loss of thinking skills, depression and schizophrenia. Studies suggest that it may be a good addition for those who suffer from memory loss, ADHD or just desire to reduce certain aging effects. Side-effects of niacin utilization are minor and include itching, tingling, headaches and redness of the arms, chest or face.

8) Our Final Take On Neuroplex

Neuroplex is presented as a natural remedy that seeks to boost cognitive functionality while also maintaining the endocrine gland within proper parameters. It features a mixture between a proprietary blend and a series of minerals and vitamins that were carefully chosen to fulfill the daily requirements of adults. The product only comes with a series of minor side-effects due to some of its ingredients. However, considering the large number of components, individuals with known allergies should consult a personal healthcare provider before taking this remedy. Furthermore, children under the age of 6 should be carefully monitored while under treatment and take less than the adult suggested dosage, as iron poisoning risks may occur. 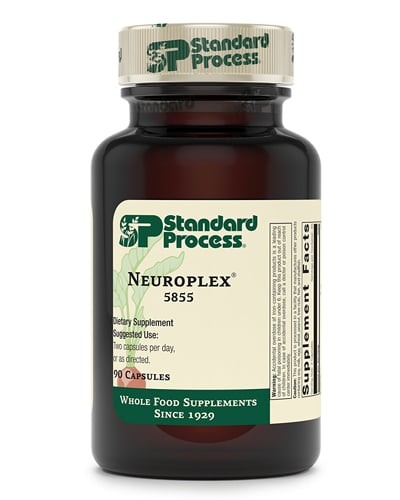 clear
Q:
What are the core ingredients in Neuroplex?
A:

Q:
What is Neuroplex?
A:

Neuroplex represents a good alternative to prescribed medication for those who want to boost their cognitive functionality and endocrine system health. The formula manufactured by Standard Process features a proprietary blend of complementary tissue extracts mixed with a series of vitamins and minerals such as Vitamin B6, Riboflavin, Zinc and Iron. The product was released on the nutritional field in 1986 and enjoys great popularity. The manufacturer advises special care for children under the age of six due to the potential Iron poisoning danger.

Neuroplex represents a dietary supplement meant to deliver a broad spectrum of minerals, vitamins and complementary tissue extracts that should support the cognitive functionality as well as the health of the endocrine gland. Its main target is represented by the enhancement of concentration, memory, and focus, a claim many other formulations make today. The product has received overall good reviews and has been on the nutritional field for more than twenty years, which stands as a guarantee for its Effectiveness. Although the product doesn't come with serious side-effects, a warning of the manufacturer suggests that children under six years of age should only consume it under strict parental surveillance because an accidental overdose of iron may lead to fatal poisoning.

Yea.. I recommend this to those who have memory problems. I don’t think it works for more serious issues like Alzheimer’s disease or amnesia, but on normal people it can make a difference. I am positive of that.

I find this product to be quite interesting. Besides the fact that it made me have a better long-term memory and focus better on daily tasks, I feel better overall since I started taking it. I think it’s a good addition for everybody who wants to think faster and better. Don’t know if it workes for everybody, but it sure worked for me.