Mydayis Review – Is it Effective?

ADHD is a multifaceted neurodevelopmental disorder that can affect a child’s relationships and success at school. There are no apparent symptoms of ADHD, making this disorder hard to recognize in many cases.

Any child may undergo many of the individual symptoms of attention deficit hyperactivity disorder. ADHD is usually diagnosed in children by the time they’re adolescents, with the average age for moderate ADHD diagnosis being seven years.

Extended-release drugs gradually enter your bloodstream so that you have a constant level of the drug in your body all day.

Please note that Mydayis is a black box classified drug. This is the most severe warning from the Food and Drug Administration (FDA), and it warns physicians and patients about the drug being potentially dangerous or highly addictive.[3]

The four amphetamine salts found in Mydayis’ formula are powerful stimulants that can potentially be abused if not taken as prescribed. This may lead to high blood pressure, a fast heart rate, aggressive behavior, anxiety, and in rare cases, early death.

2) The Company Behind Mydayis

The FDA approved Mydayis (mixed salts of a single-entity amphetamine product) for the treatment of ADHD in 2017.[4] For the United States, this prescription drug is made by Shire Pharmaceuticals.

4) What Does Mydayis Do?

Two Cochrane reviews[6][7] on the treatment of ADD/ADHD in subjects of all ages with pharmaceutical amphetamines asserted that short-term studies have demonstrated that these drugs decrease the severity of symptoms. Still, they have higher discontinuation rates than non-stimulant medications due to their adverse side effects.

Another Cochrane review on the prescription of ADD/ADHD in children with tic disorders such as Tourette Syndrome showed that stimulants, in general, do not make tics worse.[8] Nevertheless, large doses of dextroamphetamine could worsen spasms in some patients.

Dextroamphetamine and amphetamine are central nervous system stimulants. They impact chemicals in nerves and in the brain that contribute to hyperactivity and impulse control.

In each of the five studies, patients with ADHD were given either Mydayis or a placebo. Each study included adults as well as teenagers ages 13 years and older.

All participants were assessed with ADHD rating scales at the start of each study and throughout to measure how their symptoms progress or ease.

At the end of each study, ADHD symptoms had lessened significantly in the patients who took Mydayis correlated to those participants who were given a placebo.

7) What You Need to Know Before Taking Mydayis

If you’re planning about becoming pregnant, discuss the use of Mydayis with your physician. Animal studies indicate a potential risk of fetal harm.[20][21][22] Infants may be born with low birth weight, prematurely, have motor or learning deficits, or experience withdrawal. Mydayis is passed through breastmilk, so it is recommended that mothers do not nurse while taking it.

8) Where to Buy Mydayis

As a prescription drug, Mydayis can be purchased from most pharmacies across the United States.

Shire Pharmaceuticals offers a small discount in the form of a discount card on your phone. Simply take it to the pharmacy with your prescription and save between $30 and $60 on each refill.

9) How Much Does Mydayis Cost?

The price for Mydayis oral tablet, extended-release 12.5 mg, can reach $1,028 for a supply of 100 tablets (up to $10,28 per tablet). A generic version of Mydayis is available in the form of an amphetamine and dextroamphetamine mixture.

If you prefer a less stimulating and lower-priced alternative to Mydayis, we recommend checking out ADDTabz.

10) What Are Mydayis Alternatives?

Because Mydayis is a prescription drug, we can only review other prescription medicines as potential alternatives. We don’t advocate substituting a treatment directed by your physician with an over-the-counter dietary supplement.

Concerta (Methylphenidate) is a controlled substance used to treat attention deficit hyperactivity disorder (ADHD). It works by activating the areas of your brain that are responsible for paying attention and staying focused.[23]

Adderall is considered a first-choice treatment option for ADHD. Studies show that it improves attention, focus, and reduces impulsive behaviors.[28] Between 75% and 80% of children with ADD/ADHD will see improved symptoms with the use of stimulant prescription drugs.[29] Adderall is also a valid option for increasing daytime wakefulness in individuals with narcolepsy, although there is little related research.

For teens, the recommended starting dose for Mydayis is 12.5 mg once daily in the morning. For adult patients, this prescription drug is available in four strengths: 12.5 mg, 25 mg, 37.5 mg, 50 mg.

"I've been taking meds for ADHD/ADD close to 8 years now. Tried Adderall at many dosages, types, and amounts of times per day over many years. My biggest issue. I forgot to take them. I tried Vyvanse." [Read full review]

"I asked my doctor about Mydayis because it lasts 16 hours. The first week I was so calm, never been so calm in my life, even with antidepressants. I was able to focus on conversations." [Read full review]

"I am diagnosed with Concurrent Concussion Syndrome with ADD symptoms. I took Vyvanse for over a year, and I thought I loved it until I realized it gave me anxiety because I was trying to cram 16 hours' worth of homework and chores into the short period the medication worked. " [Read full review]

Mydayis includes the same active ingredients as Shire’s well-known ADD/ADHD prescription medication Adderall but is formulated to help alleviate symptoms for up to 16 hours post-dose.

While ADD/ADHD is more commonly thought of in childhood or adolescence, Mydayis is targeted more towards adult patients. In essence, a group Shire Pharmaceuticals pegs as the fastest-growing segment of the ADHD market. 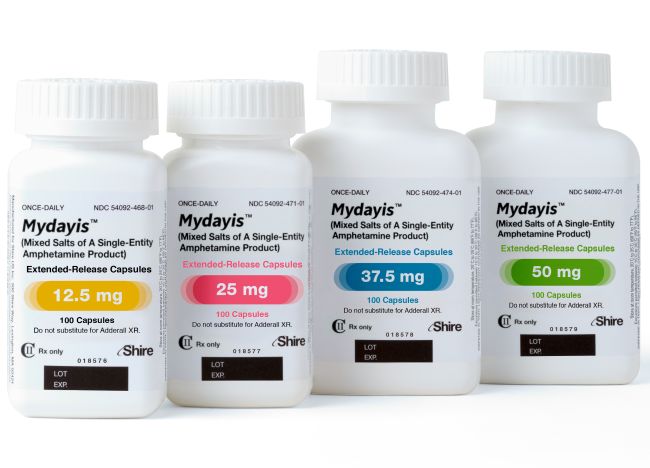 clear
Q:
What are the Mydayis ingredients?
A:

Q:
What is Mydayis supplement?
A:

Q:
What are the Mydayis side effects?
A:

Q:
Where can I buy Mydayis?
A:

As a prescription medication, Mydayis is available for purchase at most pharmacies.

Q:
How much does Mydayis cost?
A:

Q:
How can Mydayis help my brain?
A:

Mydayis is a once-daily treatment that lasts up to 16 hours after dosing. According to Shire Pharmaceuticals, this is the first ADHD treatment to offer triple-bead delivery for the extended-release medication.

Mydayis was not designed to enhance brain functions but to regulate chemicals responsible for impulse control and hyperactivity.

Q:
Are there any known negative interactions between Mydayis and prescription medicine?
A:

Q:
Can I take Mydayis with my daily multivitamins?
A:

Please note that many other prescription medications may affect the way Mydayis works. The drug could also affect other medicines. It's imperative to let your physician know about everything you are taking before starting a treatment with this prescription drug. Potential dangerous interactions include any over-the-counter (OTC) medications, herbs, dietary supplements, and illegal drugs.

Q:
Can I give Mydayis to my child?
A:

Yes, Mydayis can be prescribed to children and adolescents age 13 and older.

Q:
Are there any dangerous ingredients in Mydayis?
A:

Mydayis contains a mixture of four amphetamine salts. These substances were tested across multiple clinical trials and shown to cause mild, moderate, and even severe side effects in some patients.

Q:
How do I know if Mydayis is right for me?
A:

You should not be taking Mydayis unless it was prescribed to you by a physician.

Q:
Can I take Mydayis if I'm pregnant or nursing?
A:

Pregnant or nursing women should discuss with a medical doctor before taking Mydayis. As with all prescription drugs, this one may also have a potential risk of fetal harm.

Q:
How should I take Mydayis
A:

For teens, the recommended starting dose for Mydayis is 12.5 mg once daily in the morning. For adult patients, this prescription drug is available in four strengths: 12.5 mg, 25 mg, 37.5 mg, 50 mg.

You can contact the Shire Pharmaceuticals LLC customer support department by phone at +1 617 349 0200, by mail at 300 Shire Way, Lexington, MA 02421, United States, or by using the Contact Us form available on their official website.

Q:
How can I return Mydayis and get my money back?
A:

As Mydayis is a prescription medication, please discuss any possible returns or refunds with the doctor who prescribed it.

Most complaints gravitate around Mydayis' potential side effects and the many likely interactions with other prescription drugs or dietary supplements. Some users have also complained about a lack of results when taking this medicine.

Q:
What consumers say about Mydayis?
A:

Mydayis' reviews are mixed. On drugs.com (the leading authority for prescription drugs information), this prescription medicine has an average rating of 5.5 out of 10 (ADD/ADHD).

Q:
Who is the company behind Mydayis?
A:

Mydayis is produced and marketed by U.S.-based Shire Pharmaceuticals.