Memory Focus Review – Is it Effective?

Memory Focus is a product designed to improve memory and attention. It is advertised as a potent non-prescription treatment for memory loss, ADHD, and dementia and is produced in concordance with GMP regulations.

The company behind this product is Neurobiologix, considered a high-end manufacturer of various health supplements. They claim that all their production and development facilities operate in concordance with the latest regulations, and that all of their products are FDA approved.

Due to the product claims, Memory Focus is a supplement that presents potential benefits for a large number of people. In a healthy person it boosts cognition, particularly memory, making useful as a daily enhancer that can improve job or study performance. For people suffering from ADHD or dementia it reduces the symptoms of the conditions, helping individuals lead a normal life.

1) Memory Focus at a Glance

The ingredient formulation of Memory Focus is a combination of herbal extracts, vitamins and amino-acids. The main purpose of the supplement is to fight memory loss, thus many ingredients found in this product are commonly used for this purpose in other supplements.

The B-vitamin complex present in the formulation (B6, B12 and Folate) is found very often in supplements dealing with cognition. While it is true that this proves very helpful for people suffering deficiencies of said vitamins, research has proven that the effect in healthy individuals is limited.

Acetyl L-Carnitine is a derivative of carnitine, and is a naturally-occurring substance in plants and animals. This substance normally modifies metabolism, and its purpose in the formulation is to boost the energy levels in the brain, by improving energetics at cell level.

Ginkgo Biloba, Bacopa, and Huperzine A are three plant extracts commonly found in supplements dealing with memory loss. They have proven anti-oxidative and protective properties, and have been successfully used in the treatment of neurodegenerative diseases such as Alzheimer’s disease. The same goes for Vinpocetine, a semi-synthetic derivative of Periwinkle extract, which is used to treat neurological conditions associated with old age.

We think Memory Focus will pair well with the magnesium threonate found in Jarrow Formulas MagMind.

3) Is Memory Focus Right for You?

Intended as a memory loss supplement, Memory Sustain combines nutrients and botanicals that aide in cognitive functions and enhancing memory. This remedy contains ingredients usually found in memory improving remedies, such as Ginkgo Biloba and Acetyl L-Carnitine, Acetyl L-carnitine is a fat metabolizer that speeds up the metabolism. Also, it helps supply the brain with energy by improving energetics in the mitochondrion, the cell’s energy generator. Thus, Acetyl L-Carnitine has been shown in clinical studies to benefit cognitive ability, memory, and mood. However, there are some side effects related to its consumption, such as nausea, vomiting, upset stomach and fishy-smelling breath, urine and body odor.

In addition to these ingredients, it also contains Resveratrol. Evidence has shown that Resveratrol is a naturally occurring phytoalexin produce by some spermatophytes, such as grapevines, in response to injury. As a phenolic compound, it may play a role in the prevention of human cardiovascular diseases and also possesses anti-inflammatory and anticancer properties.

There are no online testimonials regarding the Effectiveness of this product. However, people claim that Neuro Biologix products have proved beneficial in some situations.

5) Precautions of Memory Focus Use

6) How Much Does Memory Focus Cost?

Memory Sustain is sold by bottles containing 60 capsules. It can be bought from manufacturer website or some online retailers. The product’s price can be viewed as expensive in comparison with other similar supplements, but the company claims that this price can be attributed to the supplement’s quality.

7) How to Take Memory Focus

Memory Focus is advertised as safe for all ages, and there are no reported side effects associated with it. The recommended dose is one capsule daily, but the manufacturer recommends you consult your doctor to discern what your optimal dosage is.

8) Our Final Take On Memory Focus

It is very common for people suffering from memory loss, or memory loss related issues, to look for natural remedies to help them lead normal, healthy lives. Neurobiologix attempts to do that, offering a moderately expensive, but seemingly effective product that deals with memory loss, dementia and ADHD. Despite the lack of testimonials directly from the manufacturer, there are many reports of Memory Focus improving the lives of people that tried it.

Keep in mind that this medication is not prescription-based and that there is no evidence of testing having been done to confirm the product claims. As appealing as the product seems, if your conditions are severe and interfere in your daily life, it is strongly recommended that you consult a doctor that can guide you towards the best option in medication for you. 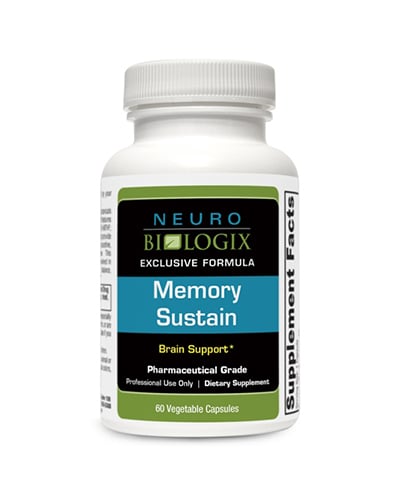 clear
Q:
What does Memory Focus contain?
A:

Q:
Are Memory Focus benefits actually a reality?
A:

Memory Sustain is a memory enhancer that is intended especially for individuals who have dementia, ADD/ADHD, and other neurological problems. Due to its ingredients, it should prove effective in the improvement of cognitive functions and even people's general mood. It is important to keep in mind that if the label dosage is exceeded, some side effects may occur. If one of the above-mentioned or other is experienced, people should immediately stop its usage. Overall, it represents an alternative supplement that might help people.