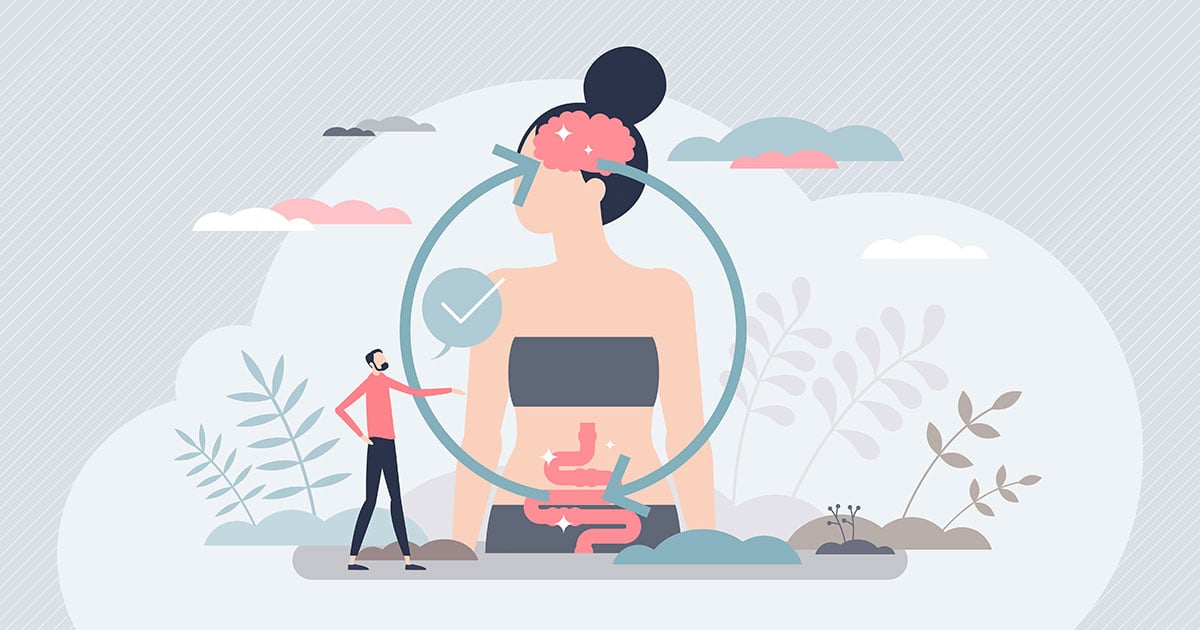 We’ve all heard the expressions “trust your gut’ or “follow your gut instinct,” but what exactly does that mean and why did phrases like these originate? The fact is that there is a strong connection between the gut and the brain.

The health of our digestive system can affect how we think, feel, and regulate emotions. The reverse is also true; our brains can influence stomach or intestinal issues. It is important, therefore, to maintain a healthy gut to support a healthy brain.

The brain is the main organ of our central nervous system, which many of us learned about at some point in school. What we probably weren’t taught is that our body has another nervous system, called the enteric nervous system. This system consists of a network of nerves and neurotransmitters found in our digestive tract. There is an estimated 100 million nerve cells found in our gut.

Researchers refer to these nerves and neurotransmitters as our “second brain.” The direct communication that exists between our gut and brain can be seen in the well-known fight or flight response. If a person senses danger, the nerves in our gut slow or stop digestion to divert more energy to a potential threat. In the same manner, if we experience fear before a major presentation our “second brain” is directly affected and can cause abdominal pain or diarrhea.

Bacteria Found in The Gut

Usually, when we hear the word bacteria, we think of illness and fevers, but the reality is that some bacteria or microbes are very good for us and can influence brain clarity. Trillions of microbes exist in our gut, and these bacteria play an important role in how we feel and how sharp our mind is.

Eating foods high in sugar and refined carbohydrates produces bad bacteria which can cause brain fog. There is a link between the number of good bacteria we have in our gut and elevated mood and memory.

How Does An Unhealthy Gut Lead To Brain Fog?

Difficulty concentrating, poor short-term memory, and the inability to multi-task are all features of brain fog. This can impact a person’s ability to perform daily functions. Brain fog can be caused by a variety of factors including lack of sleep, excessive alcohol consumption, and high amounts of stress, but it can also be caused by an unhealthy gut.

An imbalance in the bacteria in our gut can interfere with the availability of neurotransmitters, like serotonin and dopamine in our brain. Serotonin is a natural mood booster, and approximately 90% of the body’s serotonin is produced in the gut. Dopamine is directly involved with memory and feelings of pleasure. Altering the levels of these chemicals lead to problems with cognition, focus, and mood.

Histamine is another substance that can be increased if the microbes in our gut are off-balance. Excess histamine in the brain can lead to difficulty concentrating and negatively impact memory.

Studies have demonstrated the relationship between gut health and better cognitive function. This has been determined by looking at germ-free animals, the effects of antibiotics, and age.

Various studies on germ-free animals, or animals that have an absence of microbes, have less neurotransmitters available, like serotonin and dopamine. This affects the stress response, mood, anxiety, depression, and overall brain health.[1] These germ-free animals also had a higher incidence of memory dysfunction.[1]

The mental side-effects of antibiotics, which kill both good and bad bacteria in our bodies, are well established. One study found that even a single course of treatment with antibiotics led to an increased risk of anxiety and depression, and the risk increases with multiple uses.[2] Some of the characteristics of these conditions include difficulty concentrating, inability to perform multiple tasks at once, and difficulty recalling things.

As we age, our cognitive function declines. There are a variety of reasons for this, including a change in the bacteria found in our gut. The types of bacteria found in our gut are less diverse, bad bacteria are increased and good bacteria, like bifidobacteria, are reduced the older we get.[2] This is not the only factor, but certainly a contributing factor to poor cognitive function associated with older age.

How Can We Prevent Brain Fog?

By maintaining a healthy gut, we can lessen the risk for symptoms of brain fog. Good bacteria are found in yogurt; however, some yogurts can be high in sugar or individuals may be unable to tolerate milk-containing products.

Supplementing with probiotics is a great way to restore gut microbial balance. The market is flooded with different probiotics and choosing the best one may seem like a daunting task. The best probiotics contain lactobacillus and/or Bifidobacterium because they are the most commonly studied for brain health benefits. Our top 3 picks of probiotics are:

The evidence is clear that having a healthy gut can help with cognitive function, and probiotics can help people attain this. The side effects of probiotics are minimal. Gas and bloating may occur, but these usually subside after several days. Getting to the root cause of brain fog is important and taking probiotics should not be substituted with visiting your doctor if you are experiencing brain fog. Generally, we recommend using probiotics for a healthier brain.

Q:
Are gut health and brain fog related?
A:

Q:
What can I do to improve gut health?
A:

Taking a probiotic helps restore the balance of bacteria in your digestive tract, therefore, promoting a healthy gut and brain.

Q:
How should I take a probiotic?
A:

Generally, probiotics are taken once daily.

Q:
Are there side effects associated with probiotics?
A:

Miminal side effects, like gas and bloating may be experienced for several days after starting a probiotic.