Wild Bull Beta Alanine is advertised as a remedy that was particularly designed to appeal the nutritive requirements of body builders and power athletes due to its core property of enhancing levels of carnosine for the skeletal system. Responsible for this supplement is the business called Wild Bull.

The producers have been founded in Bronx and, just as the reputation of the strong part of New York city, they state that their products represent the ultimate releases on the body building market and will help people add as much muscular mass as possible in little time, thus assuring a good if not even fantastic physical form. On the other hand, none of their statements have been FDA tested yet. Among its products which are worldwide recognized, Wild Bull Micronised Creatine can be mentioned as well.

Wild Bull Beta Alanine is made out of a main ingredient which is mixed with a mineral in order to improve its effects. This particular combination has been chosen to help bodybuilders by offering the necessary nutrients for strength increase within the body so they can train harder. Moreover, the effects of Wild Bull Beta Alanineare to be improved if this treatment is followed in combination with Wild Bull Creatine, but only under medical or dietetic supervision.

Wild Bull Beta Alanine is promoted as a supplement that aims to help people enhance their physical constancy by providing a mixture between a non-essential amino-acid with a mineral to nourish their organism within proper dosages. Research revealed that non-essential amino-acids can be produced directly by the human body, thus they don’t have to be absorbed from foods and they are the building-blocks for proteins.

Moreover, they can be utilized to improve athletic performance and exercising capacity, thus providing help with building lean muscle muss and enhancing physical functions in elders that particularly need more attention when it comes to bodily nourishment because of their decreased bodily functions and duration of cellular regeneration. This component works because it is transformed into chemicals that positively impact the muscles. Furthermore, there are some clinical tests that point out the fact that taking beta-alanine enhances certain measures linked to physical performances, specifically during high-intensity exercises or strength training.All in all, it seems to be a reliable component on short-term usage due to some minor side-effects reported on long-term.

Wild Bull Beta Alanine represents a dietary supplement which aims to provide the proper nourishment for adults who seek to gain some muscular mass. Although it is mainly destined for power athletes and body builders, it can be taken by those who don’t fit in these categories as well, but after a consult with a personal healthcare provider.

The formula contains a mixture between some nutrients in which the ones found in the highest amounts are a mineral and a non-essential amino-acid. The mineral is Sodium and the non-essential amino-acid is Beta Alanine.The non-essential amino-acids are in fact building-blocks for proteins and can be produced directly by the organism. This means that individuals aren’t obliged to get them from other sources. The one found in this formula is useful to the body because it removes the toxins that are released after the break-down of the muscular tissue. Because of this, the liver can eliminate them more easily. Another positive feature of beta-alanine is linked to the maintenance of cholesterol levels.

The addition of Sodium to this product was done so that the number of electrolytes eliminated through sweat is regularized. The amount of sodium recommended in general by athletes should be between 0.5 and 0.7 g, according to American College of Sports Medicine and this product fits the pattern because it has less than 0.5 g. Furthermore, it is presented as not having gluten which is a bonus compared to similar supplements.

However, lactating and pregnant women as well as people with health issues should think twice before following this treatment and ideally seek advice of a personal doctor. The recommended serving size isA serving is of 1.2 g mixed with juice.

There are online customer testimonials about Wild Bull Beta Alanine. What is being reported includes:

This product can be found for purchase either directly on the manufacturer’s webpage or on that of other online retailers, although its price may vary depending on the retailer and the possible shipping costs. Overall, individuals regard its price as being affordable, particularly for those who are gaining at least minimum wage and desire to follow this treatment. There are no free samples offered by the manufacturer and nor is a money-back guarantee. Additionally, regular customers may benefit from certain discounts and promotions, particularly during holiday times or on order that exceed a quantity.

Pregnant or nursing women should avoid supplements based on this component due to more information required which can even prove that this ingredient is harmful of the child. For optimal effects, the manufacturer recommends 1.2g (approximately a quarter of a teaspoon) each day, combined with a beverage.

Wild Bull Beta Alanine is a formula containing a mineral and a non-essential amino-acid that aims to help individuals who are going through times of intense training or moderate, in cases preceded by stagnation. Unfortunately, pregnant or nursing women should avoid its consumption because it can do more harm than help, considering the lack of research in this area.

Wild Bull Beta Alanine is provided in form of a powder that can be easily mixed with either juice or some other beverages. So far, there was no reported side-effect from people that have followed the treatment. It can be viewed a reliable product for those who want to improve their muscular mass. 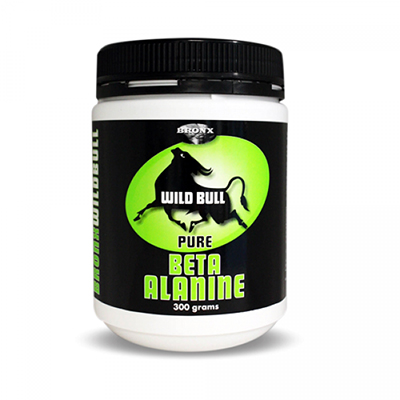 clear
Q:
What does Wild Bull Beta Alanine contain?
A:

Q:
What is Wild Bull Beta Alanine?
A:

Wild Bull Beta Alanine is a product made by Bronx Wild Bull Sports Nutrition, a nutritional company named after a tough neighborhood from New York city. This supplement aims to enhance physical strength by nourishing the muscular tissue. It is a supplement destined for individuals who are either performers or desire to increase their strength and endurance by appealing to a powder featuring a mineral and a non-essential amino-acid. No side-effects were observed on short-term usage.

All in all, Wild Bull Beta Alanine is a natural supplement meant to help mainly bodybuilders and athletes. It works by helping the liver eliminate toxins at a faster rate, maintaining cholesterol balance, and replacing the amount of electrolytes lost through sweat. It is important for individuals who follow an intense exercising treatment to be careful with their health and figure out a way to replace the nutrients lost in the exercising sessions. While there are no concrete side-effects presented by the manufacturer, people who experience any type of side-effect during consumption should stop the treatment, at least until it disappears.

I’m a runner and sometimes need a little help because the diet doesn’t actually work. However, I’m not a performer, but I did noticed results from this treatment.

I never thought this product could actually help me, but I’ve decided to try it anyway. I’m quite satisfied, I can run faster, do more push-ups and even feel more energized and I only have to mix it with juice in the morning!