Vegetable Greens is advertised as a dietary remedy that has been particularly created to serve the daily requirements of people who are going through periods marked by intense workout or strong physical activity. It is a supplement by Ultimate Nutrition, a company founded in 1979 by Victor H. Rubino.

Its establisher is known for having been a famous amateur power lifter in the United States. In fact, his company was within the first to offer protein powders, some types of fat burners, amino-acid tablets, and carbohydrate powders. The business is known for some supplements such Sports Energizer, a beverage which comes in a glass bottle and should boost the immune system while also offering energy to the whole body in order for it to become more resistant after and to physical effort.

Vegetable Greens is presented as featuring essential minerals, vitamins, as well as fatty acids and its main advertised effects are that of enhancing energy production, improving the cardiovascular system and increasing immunity. It features more than sixty two phytonutrients, hence it can be considered an “all-but-the-kitchen-sink” approach of which individuals should be careful while they’re consuming it. So far, no statement made by the manufacturer has been FDA tested and the product is not intended for treating, preventing, or curing any type of disease.

1) What is Vegetable Greens?

Promoted as a dietary remedy designed by a reliable business from the nutritional field, Vegetable Greens can be regarded as an “all-but-the-kitchen-sink” approach which contains somewhere around 62 phytonutrients whose effects should be noticed on the muscular, immune, and cardiovascular systems. In comparison to other similar products, this one features enzymes that usually promote absorption and assimilation, thus the body supposedly benefits on a larger scale when this remedy is taken.

One of the ingredients found in this formula is spirulina. Studies revealed that this component is in fact a cyanobacterium that can be eaten by humans as well as animals and is obtained from two cyanobacteria species named Arthrospira platensis and Arthrospira maxima. It is generally available to the people in form of flake, tablet, or powder and is cultivated by people worldwide.

3) Does Vegetable Greens Work and it is Safe?

Advertised as a dietary supplement created by a reliable company on the nutritional field, Vegetable Greens represents an “all-but-the-kitchen-sink” approach which features somewhere around sixty two phytonutrients whose effects should be viewed by the improvement of cardiovascular, muscular and immune systems. Compared to other similar remedies, this one contains enzymes which usually promote assimilation and absorption, thus the organism supposedly benefits more when this product is consumed.

A reliable ingredient of this formula is spirulina. Studies showed that this ingredient is in fact a cyanobacterium which can be eaten by animals as well as humans and is made from two cyanobacteria species called Arthrospira maxima and Arthrospira platensis. It is usually available to the public in flake, powder, or tablet form and is cultivated by individuals worldwide.

Due to the fact that it features somewhere around sixty percent protein, it is viewed as a complete protein with large amounts of essential amino-acids, but with low quantities or cysteine, lysine, and methionine, compared to proteins found in eggs, meat, and milk. It is introduced in nutritional supplements because of its nutrients and positive impact upon the muscular, skeletal, and circulatory system, thus potential helping people who suffer from related conditions.

Although mild, there are some unwanted side-effects which may appear such as edema and people who suffer from kidney diseases should rethink consuming this ingredient because it is more difficult for them to filter the high amounts of proteins, minerals and vitamins.

There are online customer testimonials about Vegetable Greens. What is being reported includes:

Found in bottles containing 510 grams which is the approximate amount for sixty four servings, this product is viewed as a moderate-priced product which can be afforded by people owning at least minimum wage. The manufacturer website offers the possibility of finding the most appropriate store for people living inside the United States in order to avoid high shipping costs. Furthermore, the remedy can also be purchased from some online or offline retailers, but its price may vary. However, most of the times, particularly for regular customers, promotions and discounts are offered. It is better to do a little bit of research before choosing the most appropriate retailer.

Because it contains somewhere around sixty percent protein, it is considered a complete protein with large quantities of essential amino-acids, but with low amounts of lysine, cysteine, and methionine, in comparison to the proteins found in meat, eggs or milk. Vegetable Greens is included in nutritional supplements due to its nutrients as well as positive impact related to the muscular, circulatory, and skeletal system, thus helping those who suffer from related conditions while also enhancing general health.

Vegetable Greens is promoted as a dietary supplement that was designed in order to help people who either want a natural approach for some physical problems or to enhance their immune system or for those going through periods of intense training. Because of its high quantities of nutrients that expand over 62, the body should benefit from a wide variety of vitamins, minerals, and amino-acids. However, people who are allergic to any of its components or just hypersensitive to some mixture of ingredients should consult a personal healthcare before taking this treatment. Vegetable Greens side effects are considered mild and there is no important complaint from any client in this regards. 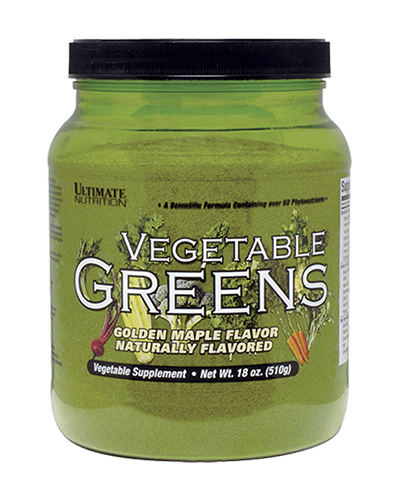 clear
Q:
What are the Vegetable Greens ingredients?
A:

Q:
Vegetable Greens is all about what?
A:

Vegetable Greens represents a dietary supplement that was designed and is being currently sold by Ultimate Nutrition, a company established in 1979. It features more than sixty two nutrients and promises to deliver a wide array of minerals, vitamins, and amino-acids to the organism on a daily basis. Its main people target is composed of athletes or individuals going through periods of intense physical training. However, due to being an "all-but-the-kitchen-sink" approach, it is wise to follow the treatment accordingly.

Vegetable Greens represents a dietary supplement which was created in order to help persons who either desire a natural approach for certain physical problems or to boost the immune system or for those undergoing periods of intense physical training. Due to its high amounts of nutrients which expand over sixty two, the organism should benefit from a wide array of minerals, vitamins, and amino-acids. However, those who are allergic to any of its ingredients or just hypersensitive to some combinations should consult a doctor before following this treatment. Side-effects are mild and there is no major complaint from any customer in this regards.

Even though I don’t do a lot of exercise, since I started taking this, I actually feel full of energy so I guess I’ll just go for a little jog. Would recommend it to others

I take this on a daily basis and I can actually say it helped me move faster and better. I even lost a little bit of weight so I don’t regret buying it at all.