It is marketed as a natural support for a better concentration, improved mind clarity and enhanced memory function. Brahmi has been traditionally used in Ayurvedic medicine as a brain and mind tonic. Even more, it is believed to have a beneficial effect in helping with conditions such as fever, inflammations, joint pains or skin problems (psoriasis, eczema, boils and ulcers).

In Western countries it has been used under the name of Gotu Kola mostly as an energy tonic.

According to the manufacturer, Brahmi by Vadik Herbs revitalizes nerve and brain cells resulting in an increased concentration, intelligence, mental endurance, learning and mental capacities and verbal articulation. It decreases the negative consequences of a busy life such as stress related disorders and senility in older people.

The product is recommended as an ideal formula for both students and elderly people.

1) Brahmi at a Glance

Brahmi by Vadik Herbs is a single ingredient formula based on the plant extract of Bacopa Monniera.

Bacopa Monniera is a perennial plant used as a traditional Ayurvedic treatment for epilepsy and asthma.
Some recent studies on animals have indicated that extracts of the plant improve memory capacity (with positive effect in reducing Alzheimer’s disease symptoms).

A double-blind study on the effects of Bacopa Monniera on human memory conducted on seventy six adults aged between 40 and 65 showed the use of Bacopa has a positive effect on the retention of new information and on the rate of learning which was accelerated.

Brahmi is a plant with a strong background in traditional Ayurvedic as a treatment for asthma and epilepsy. The plant has been used in India for hundreds of years because of its properties to support and promote healthy skin.

It is also believed that Brahmi has benefic effects on the brain and the nervous system. Laboratory studies on rats indicate that extracts of this plant may improve memory capacity. Also, according to several recent clinical trials, the plant can enhance intellectual activity.

The polyphenol and sulfhydryl components of Bacopa monniera extract have also been shown to impact the oxidative stress cascade by scavenging reactive oxygen species, inhibiting lipoxygenase activity and reducing divalent metals. This plant can enhance immune function by increasing immunoglobulin production. It may also help regulate the antibody production by augmenting both Th1 and Th2 cytokine production.

Some scientists believe that the use of Brahmi may be satisfied with reducing the problems associated with ADD and ADHD. Unfortunately, Brahmi was linked to some side effects, including dry mouth, nausea, temporary hearing loss and for women the overproduction of estrogen. Thus, we recommend consumers to consult their doctor before taking any Brahmi-based supplementation.

5) What You Need to Know Before Taking Brahmi

Each bottle of Brahmi contains 60 capsules. This is enough for one full month of uses. The cost per bottle is $24.95. Some discounts scale if you buy more than one bottle at a time.

Shipping is free anywhere in the world. There is a 60-day money back guarantee offer. Only one bottle that is returned can be opened; the rest must be factory sealed to be eligible for a refund. There is a 15% restocking fee for all unopened bottles of Brahmi that are returned. There is no free trial offer on this product.

Vadik Herbs Bacopa Monniera is marketed as a 100% pure and natural formula meeting the highest quality standards.The product is not recommended for pregnant women.

The product is a nutritional supplement designed to supports concentration, clarity and memory. It has been traditionally used by Ayurvedic medicine practitioners and is a common ingredient in various products addressing memory and focus conditions.

Also, there is research resulted evidence towards the main ingredient’s effectiveness in improving the learning ability and retention in humans.

The product is subject to a 30-day refund policy accompanied by a full refund, credit or exchange (less shipping and handling costs).

For precautionary reasons, as for any dietary supplement, we recommend a healthcare practitioner’s advice before starting using the product. 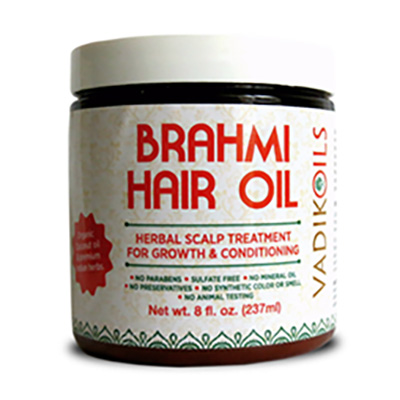 clear
Q:
What are the active ingrediens in Brahmi?
A:

Q:
Are Brahmi benefits actually a reality?
A:

According to the manufacturer, Brahmi can reduce stress and improve memory. This is due to the way in which it works to regenerate the cells in the brain. They describe studies involving this product where patients were able to experience significant memory improvements. This trial was in place for 12 months.

Brahmi Effectiveness in treating a broad range of health problems has been proven over and over again. In fact, this plant is one of the most common used ingredients in Ayurvedic as a treatment for asthma and epilepsy. In India, Brahmi has been used for hundreds of years, and it is well known for its Effectiveness in supporting a healthy skin.

There are many Brahmi-based supplements available on the market at this moment, and many companies are using this plant as an essential ingredient in their products. However, before choosing a supplement that contains this ingredient, we are firmly recommend our readers to further research the product, the other ingredients, and the manufacturer's background.