TwinLab Acetyl L-Carnitine is a dietary supplement offered as a support to enhance cognitive function as well as physical performance.The manufacturer is TwinLab, a company founded in the late ’60’s by David Blechman to produce and market a liquid protein supplement. Later, the company extended their range of products to vitamins, minerals and herbal supplements, sports nutrition supplements and teas.

The formula is based on the acetyl ester of L-carnitine, a precursor of the essential neurotransmitter called Acetylcholine (ACL). Besides the benefits on cognitive function, ACL is also essential to energy production processes. It helps transport long-chain fatty acids into the mitochondria of the cell, responsible for the energy production and beta-oxidation.

TwinLab Acetyl L-Carnitine is advertised as a product well tolerated by allergic individuals also lacking the harmful substances commonly used in this kind of products (such as preservatives, colorings, coating, sugars and salts).

ACL is the precursor of the neurotransmitter Acetylcholine, an important neurotransmitter, meaning a chemical responsible for the transmission of information between brain cells by transferring nerve signals from one nerve to another. It is considered essential for the stimulation of short-term memory, attention while also promoting REM sleep.

Another important role of ACL is to carry fatty acids from the cytosol – the main body of the cell into the mitochondria, the energy-producing furnaces within cells so that fats can be oxidized for energy.

Consumers have found TwinLab Acetyl L-Carnitine to be effective in increasing energy levels (recommending it as excellent in assisting during workout programs) and increasing mental alertness.

3) What Does Acetyl-L Carnitine Do?

Acetyl-L-carnitine is aiming to increase body energy and also to obtain a noticeable mental effect by sharpening the mind and creating more mental stamina. Some side effects can appear, although very few were documented, some of them are an increase in blood pressure, faster heartbeats, fever and large amounts may cause diarrhea, occurrences are quite rare.

Documented benefits of Acetyl L-Carnitine include enhancing cellular energy in the brain, improving mental performance and decreasing symptoms of depression. It plays a significant role in the production of energy, losing weight and burning fat and supports all bodily functions that have a high energy demand.

Published studies show that this product can help with attention deficit hyperactivity disorder in children with some genetic disorders, improving social behavior. Other studies indicate its Effectiveness in Alzheimer’s disease and Chronic fatigue syndrome.

Although deficiencies are uncommon in some cases this problem arises. Primary carnitine deficiency is a result of relatively rare hereditary disorders that manifest themselves in the form of reduced carnitine levels, poor carnitine absorption, muscle pain and progressive muscle weakness. Secondary L-Carnitine deficiency can also be hereditary or acquired and manifest itself by an increased loss of carnitine, insufficient synthesis of carnitine and malabsorption from diet.

4) What Acetyl-L Carnitine Does?

5) What You Need to Know Before Taking Acetyl-L Carnitine

Acetyl L-Carnitine is currently available for purchase on the producer’s website at an affordable price. It comes in the form of 120 capsule bottles. The typical daily dosage for long-term use is 100 to 300 mg once a day, preferably in the early part of the day. Higher doses, such as 500 to 1000 mg can be taken for short periods of time.

The formula is recommended as a dietary supplement for adults in doses of 1-4 capsules daily or as directed by the healthcare professional. There is however no evidence of clinical studies involving TwinLab’s formula. The manufacturer mentions no side effects or drug interactions. However, Acetyl-L-carnitine might cause stomach upset, nausea, vomiting and restlessness, as well as a “fishy” odor of the urine, breath and sweat. Also, there is concern that it may slow blood clotting speed and hence interact with medication used to slow blood clotting.

8) Our Final Take On Acetyl-L Carnitine

TwinLab Acetyl L-Carnitine is advertised as a high quality source of Acetyl L-Carnitine, designed to provide its users with the necessary support for maintaining a healthy cognitive function and for increasing overall energy and physical performance.

The manufacturer is an experienced international company and consumer reviews report that TwinLab Acetyl L-Carnitine works to deliver the benefits mentioned by the advertising. This is why we may assume the formula works for some consumers. However, each patient is different and some may not experience these benefits or experience them with a lower intensity.

However TwinLab Acetyl L-Carnitine, like all dietary supplements, has not been evaluated by the FDA, and there is no scientific evidence to support its effectiveness. Before considering taking any unapproved nutritional supplement you should always consult a healthcare professional. 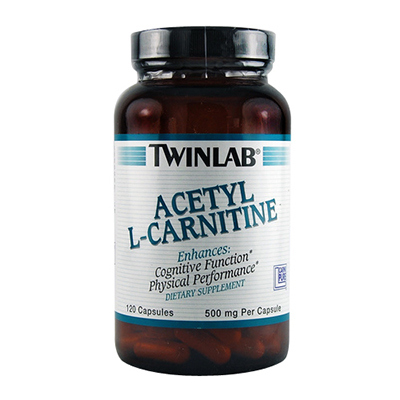 clear
Q:
What are the active ingrediens in Acetyl-L Carnitine?
A:

Q:
What is Acetyl-L Carnitine supplement?
A:

Reliable against memory problems. Didn’t find and physical improvements tho.