Soy Lecithin represents an addition to a healthy diet which seeks to improve the health of the liver while also helping the organism in the processes of detoxification. Another important set of benefits advertised by the Alfa Vitamins Manufacturer refer to brain and cognitive functions resulting in enhanced memory, concentration, focus and attention improved throughout time.

The business that created and released this remedy on the nutritional market goes by the name of Alfa Vitamins. Their facilities are located in Florida, US. Founded in 2000, the business currently has more than 1670 retail outlets which feature supermarkets, recognized pharmacies and other establishments from the commercial domain. The company states that their manufacturing processes are conducted according to the GMP certifications and all their manufacturing processes follow the guidelines of the United States Pharmacopoeia and Department of Agriculture.

Soy Lecithin has one main ingredient, particularly soy-extracted Lecithin. It is recommended for everyone that desires to receive a natural help, as an addition to a healthy dieting and exercising program. Although it is not stated by the manufacturer, it seems that the product is designed to address adult needs more than the needs of children.

Soy Lecithin represents a dietary supplement based on a natural ingredient which is mainly recommended for individuals that have been consuming foods that feature high-cholesterol or who have been drinking alcohol excessively. Because it helps the body with the cleansing processes, the product may be regarded as a good supplementation in these specific cases.

The core ingredient of Soy Lecithin is the one that actually gives its name, Soy Lecithin. Numerous other benefits are scientifically validated for Lecithin, although results in some cases remain contradictory.

However, there were a series of clinical studies that point out to its benefits regarding dementia and Alzheimer’s disease and there is a solid argument for these benefits. Lecithin is believed to be successful because it is further converted into Acetylcholine which increases the time-response of nerve transmissions and directly boosts memory.
Phosphatidylcholine, a component of Lecithin, prevents fat accumulation in the liver and minimizes damage by done by alcohol and fast-food consumption, and an overall unbalanced way of living in general.

2) What Are Soy Lecithin Ingredients?

Promoted as a dietary supplement that helps get rid of some fats and lipids while also improving the health of the liver after prolonged alcohol intake, Soy Lecithin contains one core ingredient: Lecithin. It was created mainly as a counteraction aid for the damage the body has to endure on a daily basis as a result of unhealthy food and beverage consumption.

Soy Lecithin represents the core component of this product. It is naturally found in foods like egg yolks and soybeans. Studies show that this ingredient is relevant when it comes to treating memory disorders that include Alzheimer’s disease and dementia. This occurs because lecithin is converted into Acetylcholine, a neurotransmitter that helps with nerve impulses transmission and is directly involved in memory mechanisms. Lecithin is a generic term that designates any group of yellow-brownish fatty substances which occur in both plants and animals. The group contains, among other things, a class of phospholipids that includes Phosphatidylcholine and Phosphatidylinositol.

Phosphatidylcholine, frequently called Lecithin, is regarded as an essential nutrient and is often included in the B-complex vitamins. The nutrient may protect the liver from certain toxic or alcohol-induced damage because it lowers the fat accumulation in the tissues of the liver. Phyllis Balch, the author of the book “Prescription for Herbal Healing,” advises a dosage of 500 mg three times throughout the day for treating symptoms of liver diseases. A daily intake recommendation has not been issued, however.
The controversies and questions around this ingredient still exist, and on some occasions, it can cause certain side effects such as nausea, diarrhea, fullness, and abdominal pain.

There are online customer testimonials about Soy Lecithin. What is being reported includes: “I’ve been suffering from alcoholism for more than ten years, and because I realized I’ve damaged by the body, I started to do something so that I can become healthier. I bought this product, and I can see it is indeed effective,” and, “I find this formula to be a good supplement with little-to-no drawbacks.”

5) Precautions of Soy Lecithin Use

6) How Much Does Soy Lecithin Cost?

This product is sold in bottles of 100 softgels each. It can be purchased either directly from the manufacturer’s webpage or other online or local retailers. A good feature of this company relies on the fact that it provides a 20% discount coupon if you recommend the product to three other people. Moreover, they have a “points for redemption” system which allow every customer to benefit from a series of discounts when they become members of the site. Overall, the formula’s price is viewed as moderate and sometimes even cheaper when compared to similar remedies. The customer service also allows people to state any positive or negative opinions regarding their products, in what looks like an objective, transparent environment.

Although this product comes with a series of beneficial effects, if the treatment isn’t followed considering the label dosages, Soy Lecithin may have some unwanted side effects such as abdominal pain, diarrhea or nausea.

Overall, Soy Lecithin is a natural supplement used to help the body get the cleanse it requires in an easier way. It is suggested mainly for people that have undergone periods of alcohol consumption of fast-food eating and strongly need an addition to their dieting. The product should help the body get rid of some fats and lipids while also providing a boost to cognitive health. It seems to be an affordable remedy which is easily accessible to everyone who desires a treatment for the above mentioned reasons. Although Lecithin does not come with serious side effects, if the recommended amounts are exceeded over prolonged periods, some may appear. 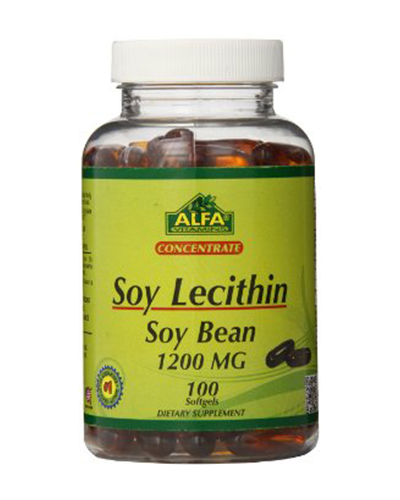 clear
Q:
What are the active ingrediens in Soy Lecithin?
A:

Q:
What is Soy Lecithin?
A:

Soy Lecithin is a dietary supplement whose core purposes include helping the body detoxify, enhancing the health of the liver, boosting cognitive function and reducing the damage done by fast-food and alcohol consumption. The business responsible for this remedy is called Alfa Vitamins. The formula features one single ingredient, Lecithin which typically contains Phosphatidylcholine and Phosphatidylinositol. The Lecithin used for this supplement was obtained from a vegetarian source which makes the formula available for vegans and vegetarians as well. Some side-effects may appear if the dosage is exceeded, including diarrhea, nausea and abdominal pain. No precautions have been mentioned by the manufacturer.

Advertised as a dietary supplement meant to enhance cognitive functions while also lowering the fat cells in the liver, Soy Lecithin is easy to use and available to vegetarian and vegans. It comes with little-to-no side effects, but some may occur if the suggested dosage is exceeded. Its core ingredient requires further research, but studies that have been conducted so far reveal its positive effects on the organism and brain.

There are some situations in which it can also be utilized to lose weight because it can help the consumer get rid of lipids and fats, and Lecithin has gained some popularity as a weight loss solution. Considering the general opinion of older customers, the list of ingredients and the experience of the manufacturer, it can be stated that this product is of good value, and it is effective.

I’ve been using this ever since I quit drinking. I felt like I needed something more than a good diet so a friend suggested this. I like it so far, no negative results or unwanted effects sofar.

I started taking this supplement because I could see how my body is suffering because of my bad eating habits. Although I started two months ago, I can feel its positive effects. I’ve even started losing weight!