Soy Isoflavones is a dietary supplement formulated to assist the specific needs and healthcare concerns of women.

The formula is produced by the American company Alfa Vitamins Laboratories, located in Florida, USA. The company sells dietary foods in 51 countries all over the world for almost 10 years. The company prides itself with a rather diversified product portfolio and with standardized manufacturing processes that follow the general guidelines established by industry authorities: the FDA, the Department of Agriculture and the USP.

Soy Isoflavones is offered as an estrogen supplementation which may lead to the conclusion that this is a formula designed especially for adult women. The many benefits of Isoflavones extend also to men, as research seems to indicate. These benefits include: heart benefits (preventing coronary heart attacks), cholesterol lowering effects, decrease of osteoporosis risk, and prevention of certain types of cancers.

1) Soy Isoflavones at a Glance

Soy Isoflavones is based on a herbal formulation of ingredients.

Soy is a species of plant classified as a legume known as a rich source of protein, fiber and vitamins. It has been observed that regular use in sufficient amounts results in lower cholesterol, better cognitive function, reduced risk of heart disease, reduced risk of osteoporosis, and reduced cancer rates for its consumers.
It is believed that the benefits are given by to a group of compounds called Isoflavones. Isoflavones are organic compounds, also known as phytoestrogens. The most common Isoflavones are genistein and daidzein which have been researched over the past year for their believed benefits in fighting cancerous tumors, improving sexual performance, immune function, etc. Research is still considered preliminary, as trials showed controversial or contradictory results in some cases.

Genistein is found in large amounts in soy derived products such as tofu. It is advertised as a potent anti-oxidant, anti-inflammatory, and anti-cancerous substance.

Daidzein is a hormone-like compound believed to have both estrogenic and anti-estrogenic effects. The benefits of this substance in inhibiting growth of cancer have been rigorously studied. It is believed that the mechanism of action is that of replacing estrogen from the cancerous cells, which need estrogen to grow.

The most common side effects of soy derived products are gastro-intestinal upset, nausea, itching and rash. It is considered likely safe if used on short term. Long term use may lead to more severe side-effects.

3) Is Soy Isoflavones Right for You?

Soy is a species of eatable plants, classified as a legume and known as a very potent source of protein, fiber, and vitamins–all important nutrients that bring multiple health benefits. Consumption of this legume has been linked to lower cholesterol levels, improved cognitive function and reduced risk of heart disease.It has been discovered that the many benefits of the plant are owed to a group of compounds called Isoflavones. The highest amounts of soy Isoflavones are found in foods like soy nuts or red clover.

Daidzein is present in soy derived products with both estrogenic and anti-estrogenic effects. The compound is believed as beneficial on many levels, but the information is based on laboratory tests only. There is no conclusive evidence that the compound fights against certain types of cancers even though its anti-angiogenic action is well known. Results from human and animal testing showed contradictory results.

Genistein is also found in large amounts in plants other plants such as kidzu or fava beans. Its main benefits include anti-oxidant, anti-inflammatory and anti-cancerous effects. The compound is also used to eliminate intestinal parasites.

Osteoporosis is a common bone disease affecting especially elder people. In women, one of the main causes is estrogen deficiency, which accentuates after menopause. Isoflavones are believed to inhibit bone re-absorption and enhance bone formation.

However, clinical research is controversial. Some in-vitro studies have showed that Isoflavones may in fact favor the expansion of some types of breast cancer tumors. Even more, they seem to decrease the Effectiveness of commonly-used drugs to treat cancer.

The suggested dose for this nutritional supplement is 1 capsule daily, preferably with a meal. There are no testimonials available to support the benefit claims and no mention of a clinical trial involving this formula.

This formula is sold for a moderate price. A bottle contains 60 capsules and should suffice for 2 months of treatment. The product is available for online purchasing at various retailers, including the manufacturer’s official website. Transactions from the official website are secured by SSL (Secure Sockets Layer) technology. Shipping charges may vary from one distributor to another and depending on the country where it is delivered. There is no mentioning of a free trial period or a money back guarantee policy under any circumstances. Full or partial refund is offered for online purchases, under certain conditions disclosed on the manufacturer’s website.

Soy Isoflavones is recommended as a dietary supplement in doses of 1 capsule daily. For best results it is best to take it with a meal.

Soy Isoflavones is designed as a support for individuals interested in benefiting from the numerous health enhancing qualities attributed to Isoflavones and soy. The formula is marketed to bring a supplemental uptake of estrogen, which is the primary female sex hormone involved in many functions of the body (circulatory, sexual, liver, digestive etc.). It is impossible however to evaluate the effectiveness of this specific formula because there are no reviews from consumers and no evidence of clinical trials involving it. More so, general information on the product is scarce. A daily value of the necessary intake of active substance has not been established either an the FDA does not approve the use of this supplement for the treatment of any condition. 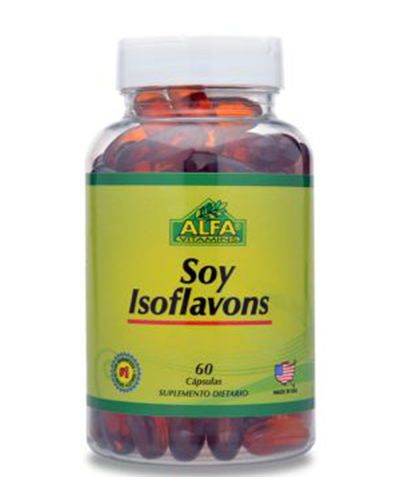 clear
Q:
What are the Soy Isoflavones ingredients?
A:

Q:
Soy Isoflavones is all about what?
A:

Soy Isoflavones is advertised as a support for the health of women in particular (but may also be considered suitable for men) by providing extra amounts of estrogen-like compounds to the body. The formula is manufactured by Alfa Vitamins Laboratories, a reputable company from Florida, USA. Estrogen is the primary female sex hormone involved in numerous bodily functions such as It regulating LDL levels, blood circulation, accelerating metabolism, and supporting hormone-sensitive breast cancers. Soy Isoflavones should be used by adults exclusively.

Soy Isoflavones dietary supplement is a nutritional supplement offered as an estrogen supplementation. This makes it a product that mainly addresses women's needs. However, Isoflavones are believed to have as many benefits for men as they do for women. Most of these benefits however are not backed up by thorough scientific evidence, as research conducted so far has shown controversial if not contradictory results concerning the compounds. The manufacturer makes no specification regarding the safety in use or any potential side-effects. This is why it is always best to consult a healthcare professional before starting unsupervised treatment.

This product was recommended to me by my friend who said it lowered her cholesterol considerably. I will go to do some tests next week and I decided to try the formula because I have nothing to lose. So far I feel fine but we’ll see how the results will turn out.

I like this supplement because it has a good taste and does not cause any side effects like other supplements I have tried did.