Secobarbital is a barbiturate derivative drug that possesses anesthetic, sedative, anticonvulsant and hypnotic properties. The substance is generally indicated for the treatment of epilepsy, temporary insomnia and to produce anesthesia and anxiolysis in minimally painful, short surgical procedures.

The drug is a prescription drug and is manufactured and marketed under many trade names. Eli Lilly and Company brand name for Secobarbital is Seconal. The manufacturer is a worldwide renowned pharmaceutical company, the first to mass-produce penicillin, one of the first to produce human insulin and currently one of the largest manufacturers and distributors of medications in the world. The company headquarters in U.S. Indianapolis, Indiana.

The company has discontinued production in 2001 due to its usage on a diminishing scale. However it is still available under other brand names (Amytal, Nembutal, etc).

1) Secobarbital at a Glance

Secobarbital is part of a drug class called barbiturates, that act as central nervous system depressants, and consequently produce a wide spectrum of effects, ranging from mild sedation to total anesthesia.

It is an active substance in prescription drugs and should only be taken on doctor’s orders. It is a habit-forming drug, therefore extreme caution is needed during treatment: it should never be taken for longer periods or in higher doses than prescribed.

The drug may cause severe allergic reactions (difficulty breathing, hives, swelling of the face, tongue, lips or throat), in which case you are advised to get immediate medical help. Side effects include slow heartbeat, restless muscle movement in the eyes, neck or jaw, fever, soar throat, sores inside the mouth, ongoing nightmares, etc.

3) Does Secobarbital Work and it is Safe?

As stated above, Secobarbital is a form of a prescription drug that is commonly prescribed for anxiety and insomnia; as well as in general anesthesia, for epilepsy, and assisted suicide.

It is important to understand that this is a somewhat addictive drug, and withdrawal symptoms can occur if long-term usage is abruptly ended. It is never recommended to stop the treatment without acknowledging from your doctor. Some of the most common withdrawal symptoms include anxiety, insomnia, lack of appetite, seizures, tremors and even death.

Secobarbital overdose is possible, so it’s critical to make sure you don’t exceed the maximum recommended dosage.

According to the company, this is a relatively slow-acting drug. It may take up to 10 days of treatment to reduce the symptoms associated with insomnia and other sleep-related issues.

Just like with all prescription drugs, Secobarbital has been associated with some side effects. The most common ones include somnolence, impaired motor functions, impaired coordination, impaired balance, anxiety, confusion, nausea, vomiting, nightmares, headache, allergic reactions, edema, difficulty breathing or increased sensitivity to pain.

6) How Much Does Secobarbital Cost?

Secobarbital is an average priced drug, but its price will vary based on manufacturer. Most health insurance and coverage programs will pay for the treatment with Secobarbital.

This drug can be purchased online, but it’s never recommended buying it from questionable sources. Always consult with your doctor first.

8) Our Final Take On Secobarbital

The drug is a prescription medication and should be taken accordingly. Due to its habit forming nature, special precautions must be taken in order to avoid addiction. The product should also be kept away from people with a drug or alcohol abuse history.

Also, the drug is associated to a list of severe side effects and of precautions, therefore a complete medical evaluation is needed before starting treatment.

Clinical tests have shown effectiveness in the short-term treatment of insomnia, but suggested that it is of limited value for insomniac patients who require nightly medication beyond a period of one week. 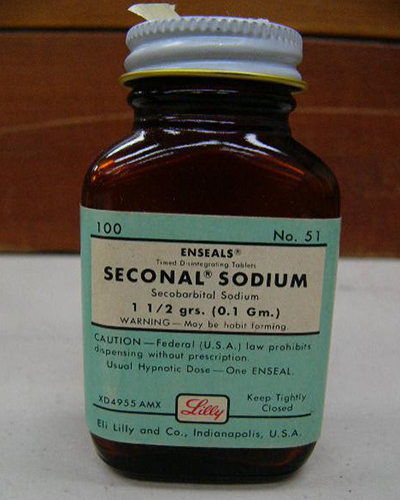 Customers Questions and Answers with Secobarbital

clear
Q:
What does Secobarbital contain?
A:

Q:
Secobarbital is all about what?
A:

Secobarbital, marketed under the brand name Seconal Sodium by Eli Lilly and Company, belongs to the class of drugs known as barbiturates. Secobarbital was first synthesized in 1928 and is used for its sedative and anticonvulsant effects, as well as an anaesthetic (it is often used as a sedative for patients before surgeries). Secobarbital (Seconal Sodium) is commonly recomneded in the treatment of insomnia and epilepsy, being effective in bringing relaxation and reducing seizures.

Q:
Are Secobarbital benefits actually a reality?
A:

Secobarbital is a form of prescription medication, and in the end, your doctor is the only one entitled to decide if treatment with Secobarbital will be beneficial or not.

We always recommend maximum cautions when prescription drugs are involved, especially when these medicines may be habit forming. It is crucial never to exceed the recommended dosage.