Rice Base Review – 7 Things To Consider

Rice Base is claimed to be a remedy which was specifically designed for people who don’t want to consume milk-based proteins, but still want to get a whole-spectrum of nutrients in order to maintain or improve their overall health, particularly muscle and skeletal systems. The company that produces and distributes this supplement worldwide is named All One and has been member of the natural supplementation market for more than forty years.

The business was founded in 1972 and it takes pride in being a provider of efficient, simple nutritional answerswith observable effects when it comes to either daily problems or people who are passing through periods of intense exercising training. In addition, they state to offer a one hundred percent money-back guarantee, fact that proves their interest to be related to the customer satisfaction rather than profit as with other companies. On the other hand, their official webpage doesn’t provide a large description of their remedies, but they offer the opportunity to have any problem replied to by writing online to some of their specialists with the “Ask the Vitamin Professor” feature.

Rice Baseis advertised as having the same effects as other product of this business named Original Formula, but compared to this one, it doesn’t contain iron which makes it a possible candidate for those suffering from allergies.

Advertised as containing the same ingredient chart as other All One product called Original Formula, Rice Base doesn’t have iron, but should deliver the same vitamins and minerals potency. It is thought to be a non-addictive, dairy free, competent, and hypo-allergenic product, thus being a good alternative for vegans or vegetarians who want to try a nutritive approach for their movement issues or just an overall well-being enhancer.

One of its featured ingredients is rice protein, a convenient vegetarian source of protein which is suggested even for individuals that have to maintain a strict diet. A main effect of this ingredient is the fact that it facilitates muscle recovery. Just as any other protein type, it features some amino-acids which are known as building blocks of muscular structures. This is why, during intense physical training or just when it comes to daily activities which may cause muscle breakdowns, it is recommended an intake of thirty to fifty grams of protein, as it is stated by Tom Venuto in his own “The Holy Grail Body Transformation Program”. Moreover, they may help prevent fat storage due to the fact that it balances sugar spikes that generally occur after eating a full of carbohydrates meal.

Viewed by most of the people who have already tried this remedy as a moderate-priced approach that can even prove cheap when compared to other items possessing the same nutrient properties, this product can be found for purchase either directly on the producer official website or on some other online retailers, the most common being Swanson’s Vitamins. It comes in form of powders that are deposited in cans in amounts of 5.29 oz, 15.9 oz and 2.2 ib which is the equivalent for ten, thirty and sixty six days of treatment, depending on the reason behind its usage and the money each person that wants to follow it has.

There are no reported side-effects ofRice Base, but it is recommended to consult a medical practitioner before beginning treatment with this supplement and not exceeding the daily recommended dose of 15g per day, mixed with water or other types of beverages.

Designed by a nutritional business that has been an reliable member of the natural approach market for a certain number of years, Rice Base has the same ingredients as another remedy of theirs named Original Formula, but without iron. It is a good alternative to prescribed medication, particularly for athletes or people who are going through periods of intense training which generally needs a muscular regeneration at a structural level. Unfortunately, people under eighteen are not among the recommended candidates for consuming this formula because it may cause more than help. So far, there haven’t been any harmful side-effects reports and most of the clients who have already taken it reported positive results. 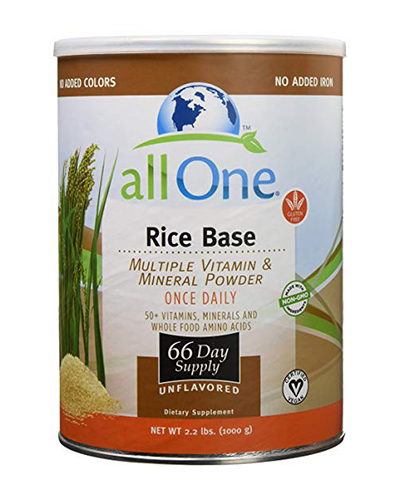 Common Rice Base Questions and Answers

clear
Q:
What are the active ingrediens in Rice Base?
A:

Q:
Rice Base is all about what?
A:

Representing a non-addictive, hypo- allergenic remedy created by a nutritional company called All One. Rice Base features the same ingredients as another product from the same company - Original Formula, but without the added iron. It is recommended for people who are going through periods of enhanced physical training and focuses on muscle regeneration at a cellular level. It comes in form of powder packed in cans that are for either ten, thirty, or sixty six days of usage.

Q:
Are Rice Base benefits actually a reality?
A:

Created by a nutritional company which has been an active member of the supplements market for more than forty years, Rice Base possesses the same components as another product of theirs called Original Formula, only without the included iron. It represents a good alternative for prescribed medication when it comes to athletes or individuals who are surpassing periods of intense exercising training which usually requires a regeneration of muscular structural cells. However, people under the age of eighteen are not among the suggested candidates for using this formula because it may harm more than help. So far, there haven't been any reported harmful side-effects, and most of the customers who have already tried it reported satisfying results.

I have been taking All-One every day for more than 20 years. It is such a complete supplement and is easy to use. I totally swear by it because I have enjoyed good health for all those years.