Prenatal DHA is a fish oil supplement with vitamin D, aimed at helping fetal development and a healthy pregnancy. It’s sold by California company Nordic Naturals, who says they’re committed to delivering the world’s safest and most effective fish oils. They were founded in 1995 and became known for introducing high quality fish oils to the United States. The company has been winning awards for over ten years because of their levels of quality in each supplement.

Each capsule contains 415 mg of Omega-3 fatty acids, including 240 mg DHA and 103 mg EPA. The fish oil itself is derived from anchovies and sardines. This also includes 200 IU of vitamin D per capsule. DHA is essential for mothers and their babies. Correlations have been drawn between early intake of DHA and healthy retina, mood, and cognitive function. Some organizations are starting to recommend DHA in infant formula because of its importance, such as how it improves nervous system development. Pregnant women often need extra DHA to replenish their own levels, since much of their normal DHA intake is transferred to their growing child.

Studies show how additional DHA in childhood can provide increased cognitive ability later in life. One study of older adults (age 55 or older) showed how taking large doses of DHA improved their lives as well, including fighting cognitive decline. Omega-3s are important at every age to maintain healthy cognitive function. Without supplements, it’s hard to get enough DHA through breast milk or formula, and this is where Prenatal DHA is relevant. It aims to fill a gap in your nutrition and that of your child’s. It’s rather important for mothers to take supplements during and directly after pregnancy. They need to replenish their nutrients along with delivering extra to their babies. A study of infants showed improved reading skill in those who had DHA.

4) What You Need to Know Before Taking Prenatal DHA

Although this comes with 90 capsules, you have to take two a day, so each bottle is a 45 day supply. The price is reasonable, between average and high average. You may be able to get free shipping depending on where you see Prenatal DHA. Some local stores may carry it, and if not, places like Amazon stock the supplement.

Every serving of Prenatal DHA delivers 830 mg of omega-3s to your body, with 480 mg of DHA. The source of the Omega-3 fatty acids is a blend of anchovy and sardine, two of the most common fish to extract fish oil from. They tend to be high in EPA and DHA compared to some other fish. A lot of research shows how fish oil is effective in enhancing cardiovascular health, especially when it comes to fighting heart disease and high triglycerides. It’s especially important for babies (those still in the womb and newborns) along with their mothers. Omega-3s can have a role in improving mental function and behavior, alleviating symptoms of depression, preventing damage caused by prescription medication, and increasing bone density. DHA has a large role in proper development, and pregnant women should generally aim to get supplements high in DHA levels. This is in addition to normal prenatal vitamins. Normally vitamin D and calcium are also extra important, but this supplement contains vitamin D, so you don’t have to worry much about how much is contained in your other supplements.

There are hundreds of positive reviews and testimonials to back up Prenatal DHA. A couple of people disagreed about the smell, which could be due to a number of reasons. One person guessed that they received a bad batch from an unreliable vendor they were trying for the first time. Nordic Naturals is considered a popular and reputable brand with a long history in developing fish oil supplements. Prenatal DHA appears to be another success, a high quality product for pregnant and lactating women to get the omega-3 fatty acids they need. DHA is an essential part of their diet and Prenatal DHA is a good supplier of it. 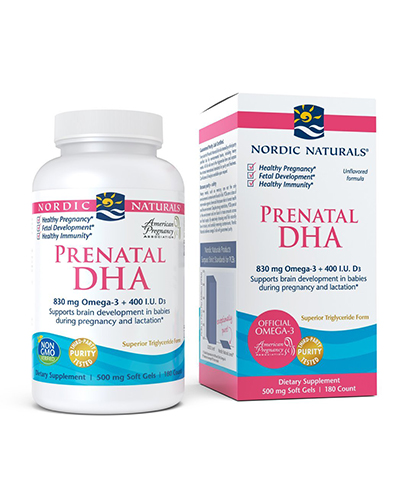 clear
Q:
What are the Prenatal DHA ingredients?
A:

Experts recommend that people have a minimum of 500 mg EPA and DHA (combined) every day. These essential fatty acids perform important roles in human health, and our bodies don't make them automatically. We require our food to give us the amounts of omega-3s we need, but unfortunately we often don't get enough. Supplements can help with that. This product is popular because it has no taste, no odor, small soft gel capsules, and more DHA than EPA. One reviewer pointed at that this is not a substitute for prenatal vitamins. It's meant to supplement your other supplements. For the price, and the quality, this is a good buy.