OceanPure is marketed as a potent source of Omega 3 fatty acids, phospholipids, and Astaxanthin effective in assisting to a healthy brain and heart function, healthy vision and joints, and achieving optimal levels of energy. The formula is manufactured in an FDA inspected facilities by the company Stop Aging Now. This is one of the largest suppliers of nutritional supplements in America and occupies a front position on a worldwide scale. The company markets numerous formulations for a large number of ailments. OceanPure is one of the several brain supplements developed by stop Aging Now, although it has numerous other health benefits as shown by clinical research. The source of the raw materials (krill) is a sustainable one, which means that its harvesting has no negative impact on the biodiversity and does not interrupt the existing natural balance. OceanPure uses Superba krill oil form the Antarctic waters, advertised as the most potent and purest form available. More so, OceanPure is enhanced with a superior form of Astaxanthin, a patented compound called Zanthin, for additional antioxidant support. The formula is intended for the use of adults only. Pregnant and nursing women, people under medication, or those suffering from seafood allergies and coagulopathy should avoid taking this supplement without the consent of their physician.

1) Details on OceanPure Ingredients and Uses

OceanPure formula is based on the therapeutic benefits of mainly three essential nutrients which are EPA, DHA, and Astaxanthin.

EPA and DHA are polyunsaturated fatty acids that have been widely researched for their numerous believed health benefits in humans. The Omega 3’s present in krill oil are considered superior forms of these nutrients as compared to those provided by fish oil. This is because of the different form in which they are found in krill oil, which is a phospholipid form, making them easier to assimilate by the human body.
However, it seems like the Krill oil provides smaller amounts of Omega 3’s and is not as researched as fish oil in terms of safety, purity, and potency as fish oil based supplements. These minor disadvantages become less important when looking at the big picture. Existing studies have also revealed krill oil’s increased Effectiveness in improving cholesterol levels, blood glucose, and triglycerides, improve symptoms of joint affections like rheumatoid arthritis and osteoarthritis, and ease menstrual cramps.
Krill oil’s safety has not been thoroughly evaluated in the case of pregnant women and children.

At this moment, Astaxanthin is considered one of the most potent antioxidants offered by nature. It is a naturally occurring carotenoid, present in large amounts in foods like lobster, salmon, shrimp, or algae. The main benefits associated with proper intake of Astaxanthin are: protection against inflammatory conditions (rheumatoid arthritis, heart disease), support for after-exercise recovery (increased endurance, improved energy levels), support for a healthy vision, antioxidant support (scientific evidence suggests that it is up to 6,000 times more potent than common antioxidants-vitamin C, CoQ10, ALA, etc.), and optimal skin protection.

OceanPure is not recommended for pregnant and nursing women, individuals who suffer from allergies and coagulopathy, and patients already under medication without the consent of a specialist. The recommended dose is 2 Licaps per day.

5) How Much Does OceanPure Cost?

OceanPure comes in bottles of 60 liquid capsules sold for a moderately high standard price. One bottle ensures the necessary monthly supply. The unit price is lower by approximately 20% when choosing to purchase multiple bottles (6 being the maximum amount possible to purchase in a single order). An even lower price is available for customers who decide to sign in the Autoship program offered by Stop Aging Now (particularly for the 6 month’s program). The formula is delivered internationally for various shipping charges that start from a relatively high value. Shipping taxes for US orders start from a relatively low price and may reach higher values for orders bugger than $300 shipped via 2-Day Air service.

EPA and DHA are two of the most important fatty acids for the human health and have become increasingly more popular ingredients of nutritional formulas in recent years. They are also called Omega-3s and were shown to benefit human health on various different levels. Both EPA and DHA are important for the maintenance of a healthy cardiovascular function due to their capacity to lower and maintain cholesterol levels, triglycerides, and blood sugar levels. A balance diet rich in Omega 3s may reduce the risk of heart disease by almost 50%. More so, these nutrients help reduce the negative effects of excessive amounts of fats like Omega 6s and vegetable oils. A common recommendation concerning the proper dosage was not issued, but common fish oil supplements feature 180 mg of EPA and 120 mg of DHA. Krill oil supplements seem to provide fewer amounts of EPA and DHA, but are considered superior due to the increased bio-availability of these two ingredients. There are many who claim krill oil is far more effective than fish oil in reducing heart disease incidence, ease PMS, improve joint function, enhance cognition, and maintain a healthy looking, youthful skin. Scientific studies and clinical trials seem to support the claimed benefits of krill based supplements manufacturers, but these are not as numerous as those involving fish oil products. Krill oil side effects include allergic reactions, bad breath, heartburn, or upset stomach. The allergic reactions should not be taken lightly. If such an effect occurs, it is recommended to seek immediate medical attention.

OceanPure dietary formula is one of the numerous krill oil based supplement available in the nutritional supplements market. The formula features relatively low amounts of EPA and DHA per serving (120mg of EPA and 60 mg of DHA). The adequate intakes for these nutrients were not however established, so this may prove to be a suitable addition to an adequate (rich in Omega-3s) diet. The formula is produced by one of the leading manufacturers of such product in US. One of its advertised advantages is the encapsulation technology that doesnt allow any odor to reach out, preserves the freshness of the active ingredients, and eliminates the common fishy aftertaste caused by this type of supplements. The formula seems to benefit of the consumers support, but besides those from the official site, there seems to be a limited number of reviews on other websites. OceanPure is also not currently involved in a clinical trial or a scientific study of any kind. Those interested in using this formula should bear in mind that there are several warnings and contraindications when using krill oil supplements and discuss the with their healthcare practitioner or physician. 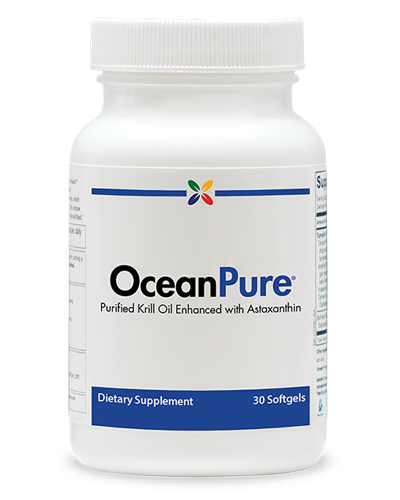 clear
Q:
What are the OceanPure ingredients?
A:

Q:
What is OceanPure supplement?
A:

This formula is advertised to be formulated with Superba Antarctic krill oil, one of the most potent and purest forms of krill oil available at the moment. OceanPure is also enriched with Zanthin, a patented form of the powerful antioxidant Astaxanthin, for superior free radical protection and cognitive and heart support. The product is encapsulated in Licaps liquid capsules to avoid an fishy odor, bad aftertaste or disintegration of the active nutrients.

The formula is recommended for adults who are not currently under medication. People who are programmed for a surgery or just had one, people with blood clotting conditions, pregnant and nursing women are advised to refrain from using the supplement, unless the doctor allows it

OceanPure is a nutritional supplement advertised as a superior product that features patented forms of active substances to maximize the benefits brought by the formula and guarantee its safety and purity. The source of the raw materials is also advertised as one of the purest and highest quality. Due to the increasing popularity of krill oil based supplements, the main concern is that the heavy harvesting of these crustaceans (which is food for numerous underwater species) may negatively affect the ocean fauna on long term. However, Stop Aging Now states that their krill is sustainably harvested to avoid any unbalance of the natural environment. Other than the testimonials found on the official site of the product, we were unable to find any valid reviews about this formula. More, so, the formula itself does not seem to be involved in any clinical trial at the moment. More so, due to some health concerns associated with the use of krill oil supplements, it is best to consult a healthcare practitioner before starting any treatment with such a product.

OceanPure is a great Omega-3 support! I have been using the product for a half an year now, and my recent blood tests have shown reduced cholesterol and triglyceride levels! And this is only one of the wonderful benefits of this product! I love it!

I like OceanPure because it gives me a lot of during the every day! The size of the capsules is also one of the smallest I have tried, and I didn’t experience the bad breath side effects like I have with other supplements.