Nootropic Stacks a new natural nootropic brain supplement created from the combination of artichoke extract and forskolin, and it works synergistically with choline-boosting nootropic stacks. The company behind this product is Natural Stacks.

According to the manufacturer, Ciltrep (which stands for “Chemically Induced Long-Term Potentiation”) improves healthy learning and memory in the brain by supporting and optimizing levels of intracellular second messengers.

If you go to the official website, you will find a lot of useful information on this brain supplement, but the information available there might be a bit confusing for some readers. According to Natural Stacks, the general idea behind Ciltep Nootropic Stack is to increase CAMP and thus CREB activation. CAMP stands for “Cyclic Adenosine Monophosphate” (which is created from ATP – our cell’s energy currency) and CREB stands for “CAMP Response Element Binding Protein”

CREB is a “cellular transcription factor”, meaning that it can bind to DNA sequences in order to increase or decrease downstream gene transcription. Clinical studies showed that CREB can support the neural plasticity and long term potentiation. On the other hand, low levels of CAMP have been linked to many neurological disorders, including Huntington’s disease.

All this may sound like gibberish but the bottom line is that the forskolin (which comes from the Coleus Forskohlii plant extract), has the property to increase CAMP in the cells. While forskolin increases CAMP in the cells, the Artichoke extract prevents it from being broken down. And these are the two core ingredients of Ciltep Nootropic Stack.

If you prefer a formula that’s more well-rounded, we think this brain-boosting formula by Brainol is a good alternative.

3) What Does Nootropic Stacks Do?

The first thing that got our attention while reviewing this product is how very few ingredients this formula actually contains. Unlike other similar brain supplements that include basically everything; every single ingredient that showed some benefits for the brain health, Ciltep Nootropic Stack’s formula is focused around just a few key ingredients: Artichoke extract, Coleus Forskohili extract, L-Phenylalanine, Acetyl-L-Carnitine, and Vitamin B6.

Artichoke is an unconventional nootropic ingredient, but it’s included because it contains Luteolin, which has been shown to have significant nootropic effects including increased cognition, improved long term memory, increased wakefulness, and neurotransmitter protection. Ciltep Nootropic Stack contains 900 mg of Artichoke, which is quite a lot.

Ciltep Nootropic Stack also contains 500 mg of L-Phenylalanine, one of the essential amino acids that the brain uses to make dopamine, can support efficient dopamine metabolism for maximum motivation and a positive mood.

Ciltrep Nootropic Stack is available in bottles of 60 vegetarian capsules each. The recommended dose is 2 to 3 capsules per day, which means that some users might need two bottles for a full month of treatment.

Ciltrep Nootropic Stack costs, on average, $34.99, which may be a little bit out of the price range for some. The supplement can be purchased directly from the manufacturer. Some discounts or promotion may apply.

7) How to Take Nootropic Stacks

Finally, vitamin B6 is included to help with the synthesis of neurotransmitters including dopamine, serotonin and GABA.

8) Our Final Take On Nootropic Stacks

All in all then, our team impression on Ciltep Nootropic Stack has been fairly mixed. If you like reading our reviews on various brain supplements, then you know that we like formulas that include amino-acids (especially essential amino-acids) and we somehow dislike formulas with too many ingredients or too many herbal extracts that simply cannot work together.

Ciltep Nootropic Stack has a bit of both. The inclusion of L-Phenylalanine and Acetyl-L-Carnitine is great and we do believe that these two ingredients can work and deliver some of the claimed benefits. At the same time, the supplement also contains two herbal extracts (Artichoke and Coleus Forskohlii), but these herbal ingredients are used with ingenuity – they may actually work together!

For us Ciltep Nootropic Stack it’s an interesting brain supplement. We can’t say it’s a 100% perfect nootropic but then we would argue that no nootropic is perfect. 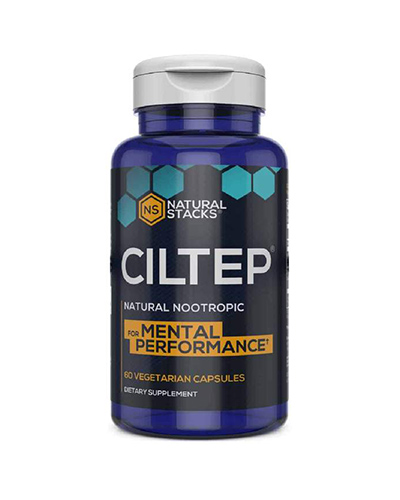 clear
Q:
What are the active ingredients in Nootropic Stacks?
A:

Ciltep Nootropic Stack is a product that breaks away from convention thinking and mixes creativity with science to make something exciting. We really enjoyed browsing the official website that is packed with useful information, not just on the formula, but about the manufacturer as well. You might be surprised, but this, sadly, is not a common practice among supplement manufacturers.

As for the formula itself, Ciltrep Nootropic Stack does look appealing. It contains some interesting ingredients with proven record in improving memory, focus, and energy levels.

Do we recommend it? We believe that Ciltrep Nootropic Stack may worth a try but the price may be a little bit too much for some. Depending on the dosage, the supplement can cost you up to $50 for just a month of treatment.