Schiff Mega-D3 Superior is a formula designed to support areas of health that usually decline with age, particularly the joints, breast and colon, memory and concentration, muscles and bones, cardiovascular as well as immune system.

The manufacturer of this product is Schiff Nutrition Group, a leading nutritional supplement company originated in Salt Lake City, Utah, United States. The company was established over 75 years ago and has a vast product portfolio which includes over 400 products (vitamins, nutritional supplements, and nutrition bars).

The product is designed for people who wish to maintain their health as they age. According to the manufacturer, the formula combines Vitamin D3, Resveratrol, and Red Wine Complex to ensure optimum nutrition for five key body systems and processes.

Vitamin D3 has been linked for several decades now to health-enhancing properties. Recently, deficiency in Vitamin D3 has been observed in case of patients suffering from health issues such as depression, back pain, cancer or impaired immunity. Its role is under continuous research and its usability areas are expanding to new areas such as high blood pressure treatment or diabetes.

Resveratrol is found in the skin of red grapes and other fruits. It is currently the subject of many research studies, still, a confirmation of its range of benefits and long-term effects on humans are in its infancy. Some of its most popular properties include powerful anti-oxidant, immunity increase, cardiovascular and anti-inflammatory benefits. Resveratrol is believed that it may have a similar behavior to the hormone estrogen, so people suffering from hormone-sensitive conditions (such as certain types of cancer) should avoid using it. Also, the side effects of long-term use and the effects on pregnant and breastfeeding women are not known.
Consumer reviews are generally positive reporting high effectiveness and a good price-quality ratio.

3) Does Mega-D3 Superior Work and it is Safe?

Compared to similar health improvement supplement, Schiff Mega-D3 Superior contains three ingredients that have been studied for their beneficial therapeutic qualities. One of these is Resveratrol, a remedy naturally found in the skin of grapes. Being available worldwide as a supplement, it has shown to behave as an antioxidant as well as an anti-inflammatory. Although studies suggest its health enhancing properties, these have mostly been made on animals. On humans, resveratrol research has been inconclusive. Because Resveratrol can counteract the formation of fat cells, it is thought to promote weight loss and slow aging. Since resveratrol sometimes possesses properties common to estrogen, is not recommended for people with hormone-sensitive types of cancer.

Another constituent of this remedy is Grape seed extras. Grape seed extract is obtained from seeds of red wine grapes. Along with their sap and leaves, it has been traditionally used in natural treatments for thousands of years. There is evidence that grape seed extracts help with some cardiovascular conditions. Also, this natural ingredient helps with eye diseases, especially related to diabetes. Grape seed extracts are generally considered safe. However, side effects such as itchy scalp or headaches may occur.

There are no online testimonials regarding the Effectiveness of Schiff Mega-D3 Superior.

5) Precautions of Mega-D3 Superior Use

Sold in bottles containing 90 capsules, Schiff Mega-D3 Superior can be considered a moderate price product, especially when keeping in mind the promised effects. Although found for purchase on the manufacturer’s website, it can also be bought for other offline or online retailers. Sometimes, discounts and promotions are offered, so if people are somehow skeptical about this product, they can wait for a promotion to try it.

The recommended daily dose of Schiff Mega-D3 Superior is 1 capsule.

Schiff Mega-D3 Superior is advertised as a Vitamin D3 rich dietary supplement which will provide support to the main body systems as they are affected by aging processes. Although the ingredients have all been researched to various extents, for some of the research is still in its early stages and results yet inconclusive, as it is the case for Resveratrol.

The manufacturer mentions no side effects or other medication interactions, still, ingredients have under certain conditions been associated with side effects. Consumer reviews are generally positive, still, it should be mentioned that the success of any one treatment depends on the health condition of the patient and on other external factors (lifestyle, diet, etc)

For precautionary reasons, we advise you to ask a doctor’s or pharmacist’s opinion prior to starting treatment with Schiff Mega-D3 Superior. 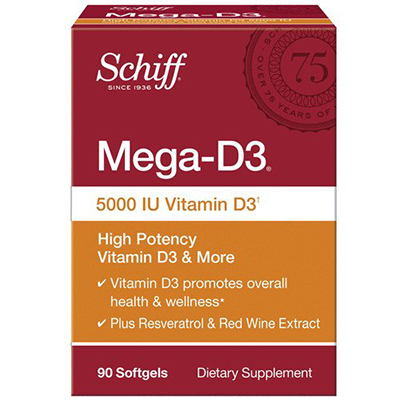 clear
Q:
What are the Mega-D3 Superior ingredients?
A:

Q:
Mega-D3 Superior is all about what?
A:

Schiff Mega - D3 is advertised as a supplement that aims to maintain body health. The company that produces this formula is Schiff Nutrition International, a business located in Salt Lake City, Utah. Schiff Mega - D3 is a dietary supplement that uses Vitamin D3 as its main ingredient. Vitamin D3 promotes bone and muscle health, thus reducing the risk of movement disorders. The formula also includes Red Wine Complex and Resveratrol, both added to sustain concentration as well as protect against learning and memory disorders.

Q:
Are Mega-D3 Superior benefits actually a reality?
A:

Being promoted as a product rich in Vitamin D, Schiff Mega-D3 Superior should help improve health problems related to age decline. Its main components presumably work together to provide an overall circulation and cell regeneration enhancement. Although there are no particularly researches related to the usage of this product, its ingredients have been partially certified through clinical studies.

There are some side effects when it comes to Schiff Mega-D3 Superior treatment, and if any occur, it is recommended the usage to be instantly interrupted. For better results, people using this product should balance it with a healthy lifestyle, more specific a good exercise plan, a normal sleeping schedule and a healthy diet.

I don’t know what to say about its effectiveness, three weeks of use didn’t show any changes in attention or memory.

It actually works, after just four weeks of use I feel focused and energized, it’s a product worth consuming!

I have been taking mega-D3 for 2 months and have gotten off my blood pressure medicine and I have energy that I thought abandonded me for the rest of my life and I am just 49. I recommend this product to any one who is indoors most of the time. This product does wonders for your thyroid. At my last blood work my thyroid levels were off. My bp meds horrible side effects were awful. Life is now wonderful. Oh, and my mind is much much clearer. Just wanted to make one more mention, I got off my bp meds by choice once I seen this products beautiful performance.