In the world of brain supplements, it’s easy to find nootropics with big marketing and a lack of information available to support the claims. So you will end up with more questions than answers. What’s in the formula, and how will it affect my performance, focus, and memory? Is the supplement worth the money I’ll spend on it? Does it work?

Lumonol is developed and manufactured in United States by Avanse Nutraceuticals. The official website is packed with useful information on its ingredients and effectiveness, along with a 90 day money back guarantee.

The formula contains several interesting ingredients with proven benefits in improving memory and focus and in supporting better overall cognitive abilities. Next to these more common ingredients, Lumonol also contains several compounds that you won’t usually find in brain supplements.

Lumonol is a brain supplement that claims to improve memory, attention span, increase energy levels during the day, improve mood, reduce anxiety and even treat mild forms of depression.

According to the manufacturer, all these are possible due to its “unique” formula that includes several key ingredients such as Noopept, Panax Ginseng, and Choline.

Panax Ginseng – often referred to as the “True Ginseng”, is a natural memory enhancing herb that has shown very positive evidence in improving memory, mood, and cognitive abilities. Panax Ginseng has also been known to reduce anxiety, while protecting against memory loss and similar age-related mental ailments. Clinical studies have shown that this herbal extract has powerful effects on immunity, energy levels, and even libido. Panax Ginseng works synergistically with Ginkgo Biloba (also found in Lumonol’s formula) for greater cognitive benefits.

But the true star of Lumonol’s formula is Noopept, which is believed to be one of the most powerful nootropics available on the market (some studies seem to suggest that Noopept is 1000 times more potent than Piracetam). Noopept has the highest potential in terms of improving learning ability, memory, concentration, and focus. The nootropic works by stimulating the brain to produce neurotransmitters, improving overall connectivity in the brain.

Under first glance, Lumonol’s formula doesn’t look that different. You will see the same ingredients that are so popular in brain supplementation (Ginkgo Biloba, Panax Ginseng, L-Tyrosine, Acetyl L-Carnitine, or Citicoline), but you will also notice some ingredients that you won’t find on mostly anywhere else.

According to Avanse Nutraceuticals, Lumonol’s formula is a synergistic combination of traditional nootropic ingredients, with some of the more potent “super nutrients” available on the market. It is also important to notice that Lumonol uses only a handful of key ingredients, unlike other similar formulations that basically are a mixture of 30, 40 or even 50 “key ingredients”. Jamming as many ingredients as possible is a common practice that almost always ends up negatively affecting the results.

We like the inclusion of Picamilon instead of just GABA. Picamilon is more expensive (as an ingredient) than GABA because it consists of a mixture of GABA and Niacin. In the same time, Picamilon is far more effective at penetrating the brain blood barrier than GABA. It’s unique chemical structure also allows for improved mental energy, along with enhanced focus and longer attention spans.

Hordenine is another interesting addition to the formula. While it’s mostly found in fitness and bodybuilding supplements, Hordenine actually has various positive effects on the brain. Hordenine it’s an MAO (MAO is a chemical in the body that destroys dopamine) inhibitor known to also improve memory, mood, intelligence (in some studies), focus, and attention span. Hordenine is also believed to boost energy levels and mental energy great for extended study or work sessions.

5) What You Need to Know Before Taking Lumonol

Lumonol is available in bottles of 60 capsules each, which is enough for one full month of treatment at a recommended dose of 2 capsules per day. It is important to notice that Lumonol’s price can vary based on where you buy it from. The official website shows a price of $59.97 per bottle if you buy it online or $79.98 retail.

They offer some discounts too, like 50% off and free shipping if you buy the Voyager Pack (3 bottles).

Avanse Nutraceuticals claims that Lumonol is side effects free but our research has revealed that some consumers have complained about jitters.

We have to start with by saying that Lumonol is not for everyone, even if the company advertises it as such. Lumonol is for older people who may need/want a supplement that can boost memory, increase focus, increase energy and reduce brain fog.

This supplement has a well-designed formula that shows first results after just one week of use and doesn’t lead to adverse side effects; at least according to the manufacturer.

Lumonol contains several well-known ingredients, but the formula also includes some ingredients like Noopept (which many believe to be the most potent nootropic available at this moment), Panax Ginseng (an herb that has been used for centuries to support brain health), and Choline. The bottle costs $59.97 for a little over a month, which if you ask us, may worth the results. 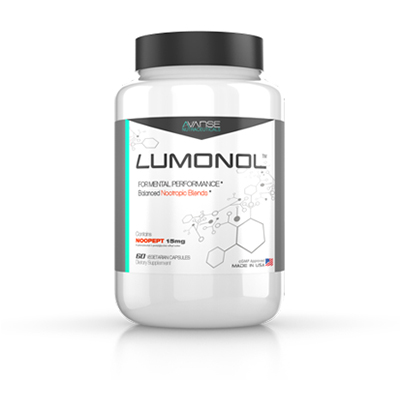 Customers Questions and Answers with Lumonol

clear
Q:
What does Lumonol contain?
A:

Q:
Lumonol is all about what?
A:

Lumonol by Avanse Nutraceuticals is a dietary supplements advertised as the world's most effective nootropic. Unfortunately, this remains a simple advertising claim in the absence of any real data to support it. The formula has powerful brain enhancing properties and may increase memory, focus, information processing speed and overall brain function. The formula is claimed to produce effects in as little as 60 minutes from consumption, as its effects tend to become stronger with each extra dose. In approximately 2 weeks you will feel a boost in the overall senses, and in roughly a month you'll experience improved memory as well. Ingredients include Panax Ginseng, Phosphatidylserine, L-Tyrosine, Guarana, Alpha-GPC or Ginkgo Biloba.

Q:
Are Lumonol benefits actually a reality?
A:

Lumonol may be a solid choice for those looking for a good nootropic supplement to enhance their memory, focus, or attention span. The formula contains some quality cognitive enhancements and still manages to maintain a decent final price.

However, due to the diverse and potent ingredients in the supplement, user experience is likely to vary significantly with Lumonol; start slow, and discontinue use if you feel any negative side effects or impairment.