By promising to enhance the consumer’s general health, Health Creation delivers a product based on the beneficial effects of Krill Oil. The business was founded more than twenty years ago by Dr. Rosy Daniel and is headquartered in London.

The founder of this company states that her approach is directly related to integrated medicine, meaning that she bases her product line on a combination between conventional medicine and complementary medicine. She is renowned as an Integrated Medical Consultant on a worldwide scale. Moreover, she states that consumer feedback helps the company evolve and apply to the new nutritional worldwide standards.

Krill Oil is based on Omega-3 fatty acids from Krill Oil, one of the newest types found on the market. Its core benefits are related to treating joint and bone disorders and disease as well as cardiovascular diseases. However, women particularly beneficiate from this supplement during their pre-menstrual syndrome because it lowers the pain associated with it.Unfortunately, people with fish or shellfish allergies as well as those taking antithrombotic drugs are advised to consult their personal healthcare prior to beginning this treatment because it may cause some unwanted side-effects that can further lead to deadly complications.

Even though Krill Oil is currently used by any nutritional manufacturer due to its increased popularity among consumers, further research is required in order to generally state the supplement’s efficacy.

Krill Oil focuses on delivering Omega-3 fatty acids to the human body, thus balancing the daily diet. Omega-3s are beneficial for the brain, skin, cardiovascular system, cholesterol levels, immune system, and many other bodily areas and processes that require a proper functioning from the social individual who has to be capable of doing daily chores and activities.

Some clinical studies reveal that the normal human should eat oily fish at least two times per week or take Omega-3 supplementation. Omega-3 from krill oil is considered to be easier absorbed by the body in comparison with the one obtained from fish oil, thus most of the manufacturers currently prefer to base their products on krill oil.

Research revealed that the combination between DHA and EPA is more potent that the use of this ingredients in an individual way. Both of these components are linked to treating disorders like anxiety, depression, schizophrenia, or Alzheimer’s disease.

3) Does Krill Oil Work and it is Safe?

Krill Oil represents a dietary supplement whose effects are based on its main components, Krill Oil and Vitamin A. Evidence showed that Krill Oil is obtained through extraction from crustaceans which live in the oceans. This substance has generally been used as a natural supplement by people on a daily basis. By containing Omega-3 fatty acids, it is promoted as a better alternative to fish oil when it comes to mental well-being, heart health, and overall bodily ability to reduce health problems.

In comparison with fish oil based products, the usage of krill oil started just a few years ago, and only two percent of its harvest is destined for human consumption.

However, the popularity of Krill Oil encountered a huge raise; soon after its initial release, manufacturers used it as a main ingredient and started putting its name on the labels. Even though this cash-in strategy could be immediately spotted, nowadays there are so many similar products on the market. Consumers should be careful when choosing the product that should offer the best potency and quality of the oil.

The primary use for of Krill Oil is related to reducing cholesterol levels. Some clinical studies indicate that supplements based on this oil may work without any unwanted side-effects. Moreover, it is claimed as efficient with pre-menstrual syndrome and arthritis symptoms. However, further research is required to determine specific and general effects of this ingredient upon the human body.

There are online testimonials about Krill Oil. What is being reported includes the following:

Found for purchase by bottles that contain 30 capsules, Krill Oil represents an averagely-priced product. However, when purchased in one bottle, it may seem more expensive than the other similar products.

Free shipping is offered if the acquisition surpasses a certain amount. Both on the official manufacturer website as well as on other online retailer’s sites there are phone numbers and email addresses to facilitate further questioning of the product’s quality and efficiency. Unsatisfied customers use these figures either to complain or to offer negative feedback that should directly concern the manufacturers. Unfortunately, there is no international shipment.

7) How to Take Krill Oil

As a pigment that gives the red color to some of the seafood species, Astaxanthin is a part of the carotenoids group and is viewed as a potent antioxidant. Clinical studies were linked to the support offered by this ingredient in diseases like macular degeneration, Alzheimer’s disease, and Parkinson’s disease. However, further research is needed in order to generally state its effectiveness.

Krill Oil is promoted as a supplement that bases its effects on its core ingredient that actually gives the product its name. By celebrating a major rise in popularity, this oil has proved morebeneficialthan regular fish oil, thus most of the manufacturers created their own product that contains “100% krill oil.”

The majorbeneficialeffects of Krill Oil are related to cardiovascular, immune and cognitive system and it may help treat symptoms that come with Parkinson’s disease, dementia, schizophrenia, or Alzheimer’s. Despite the fact that most of the people using this product reported positive aspects, further research is needed in order to determine whether Krill Oil is indeed better than similar supplements. 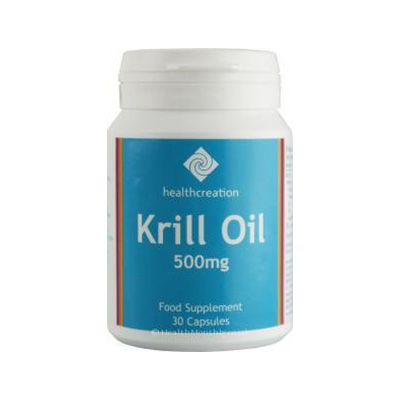 Krill Oil is promoted as a dietary supplement whose beneficial effects are based on its core ingredient that gives the product's name. This supplement was developed by the company called Health Creation which was established more than twenty years ago by Dr. Rosy Daniel. This product targets an overall improvement of the human body and it specifically addresses areas like: cardiovascular, immune and cognitive system. It may even help women with pre-menstrual syndrome.

Considering the skyrocket in popularity of Krill Oil in the past years, most of the nutritional manufacturers have used it in their products and even put the name on the label. The core ingredient of this product focuses on lowering cholesterol levels and can even prove beneficial for women when it comes to arthritis or pre-menstrual syndrome symptoms. Moreover, the supplement may be able to fight free radicals in the body, enhancing one's general health.

It is recommended both for adults and children. No significant side effects have been reported, and it is regarded as safe for short-term usage. People allergic to fish or shellfish should keep away from Krill Oil.

Been taking these for over 9 months. Easy to swallow (and I have problems swallowing pills), no after taste or burps, can be taken on empty stomach, no smelly pills or bottle. Since taking these my health has improved greatly.

This was recommended to me for arthritis pain. Both my spouse and I noticed a significant improvement in our pain level.