Motherlove Goat’s Rue Capsules is an herbal supplement for nursing women with insufficient or no milk supply. The product is manufactured by Motherlove Herbal Company.

Motherlove Herbal Company is a US company founded in 1990 which launched the first line of herbal supplements and holistic body care line for nursing mothers and pregnant women. Since then, they have diversified their products, now developing formulas for babies as well. They produce mainly creams, oils, balms and sprays generally made of natural and environmentally friendly ingredients, like goat’s rue, fenugreek or alfalfa. According to official website, Motherlove’s products do not contain mineral oil, artificial fragrances or preservatives.

According to the manufacturer, the formula behind Motherlove Goat’s Rue Capsules has been especially designed for nursing mothers who have had breast surgery in the past, or suffer from PCOS (Polycystic Ovary Syndrome) or simply their breast size has not sufficiently increased while they were pregnant. Motherlove Goat’s Rue Capsules is also helpful in the case of adoptive mothers wishing to breastfeed their babies. Given goat’s rue potential side effects, the product should be used only under medical supervision by mothers who are insulin dependent or have low glycemia. Those who have peanut, soybean or fenugreek allergies should also consult a doctor.

1) Goat’s Rue Capsules at a Glance

Motherlove Goat’s Rue Capsules is an herbal supplement effective in increasing lactation in women with insufficient milk supply. Moreover, it is also a helpful solution for adoptive mothers. The goat’s rue herb is the active ingredient in the formula. This is a plant originating in Europe, which in the Middle Ages has been used against diabetes. Farmers have also used it in increasing milk in small domestic animals, like sheep. It has proven toxic for certain animals, however it has been discovered that only the fresh goat’s rue may be toxic, whereas the dry leaves are safe. Goat’s rue has been used as a galactogogue (substance encouraging lactation) in humans as well with no significant side effects, except that it may lower sugar blood levels. This can be dangerous for people who already suffer from low glycemia or are insulin-dependent.

3) What Does Goat’s Rue Capsules Do?

Motherlove Goat’s Rue is an herbal supplement for women who have breastfeeding problems caused by previous breast surgery (like breast reduction), PCOS, or by not increasing enough in breast size during pregnant. It can also be used by adoptive mothers. The active ingredient is a herb called goat’s rue (Galega officinalis), also known as Italian fitch or French lilac. Its main use is for the treatment of diabetes. It has also been traditionally used for increasing breast milk production as it influences the development of mammary tissue. It also acts as a liver protector, a tonic and as a diuretic. On the downside, it could interfere with the absorption of minerals (like iron).

Some clinical studies have shown goat’s rue may increase breast milk production in animals however its efficacy in treating humans has not been tested. Despite this, goat’s rue is widely used and recommended by lactation consultants. According to the manufacturer, one side effect of Motherlove Goat’s Rue is that it might lower blood sugar levels. Moreover, women with peanut, fenugreek or soybean allergy should use the product with caution. Also, pregnant women should consult a doctor before using the product. Some women also experience vomiting or nausea after using goat’s rue.

The product comes with clear use directions. The manufacturer recommends women weighing less than 175 lbs to take one capsule four times in 24 hours. Women weighing more than 175 lbs should take two capsules three times in 24 hours. It can be made with one or two ounces of liquid. However, you should avoid drinking other liquids some 15 minutes before and after taking capsules.

There are online testimonials about Motherlove Goat’s Rue. What it has been reported includes:

4) What Goat’s Rue Capsules Does?

Motherlove Goat’s Rue Capsules comes into bottles each containing 60 or 120 liquid vegetarian capsules. One bottle of 120 capsules can last for 20 days to one month, taking into consideration that the manufacturer recommends four to six capsules per day depending on body weight (you should take four capsules per day if you weigh less than 175 lb and six capsules otherwise). The average cost for one month’s supply would recommend Motherlove Goat’s Rue Capsules as a quite expensive product. The formula is widely available in online stores, as well as on the manufacturer’s website. Shipping charges are also affordable. It can also be bought from pharmacies, maternity boutiques, spas and natural food stores and even hospitals.

The manufacturer’s suggested use is the following: one capsule four times per day for women with weight below 175 lbs and two capsules three times per day otherwise. The capsules can be taken with one or two ounces of liquid. However, it is advised that no liquids be consumed 15 minutes before and after usage. The manufacturer warns pregnant women to ask for medical advice before taking the product.

Motherlove Goat’s Rue Capsules is an herbal, alcohol-free supplement for mothers with milk supply issues, including for adoptive mothers. We believe it usually accomplishes its purpose, given customer testimonials from mothers claiming their milk supply has increased substantially and that they were able to maintain it even after they started working again. However, as with all herbal supplements, it may not have any effect on some consumers. Moreover, its main ingredient, goat’s rue, has been used as a lactation stimulant for generations. However, you should bear in mind that scientific research is rather limited. Therefore, in our view, it would be safer to ask for medical advice before making any decision regarding Motherlove Goat’s Rue Capsules. 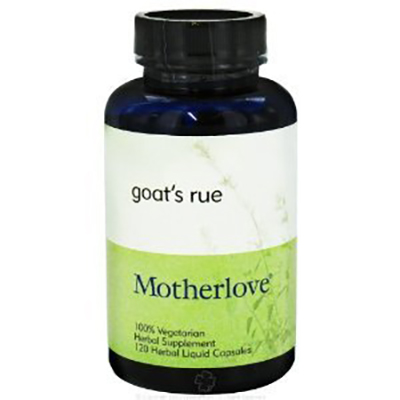 Q:
Goat's Rue Capsules is all about what?
A:

Motherlove Goat's Rue Capsules is an herbal supplement used for stimulating lactation. It is manufactured by Motherlove Herbal Company, a US based company founded more than twenty years ago. The formula should help mothers confronted with insufficient breast milk and who have suffered breast surgery, have been diagnosed with PCOS or their breast size has not increased enough while pregnant. The product is also addressed to adoptive mothers. Women with insulin dependence or low blood sugar should consult a doctor before using the formula. Pregnant women should also ask for medical advice before using Motherlove Goat's Rue Capsules.

Q:
Are Goat's Rue Capsules benefits actually a reality?
A:

Motherlove Goat's Rue Capsules is an herbal supplement designed for women confronting with low breast milk who have PCOS or have suffered breast surgery and for adoptive mothers. It is also destined to mothers whose breast size did not develop sufficiently during pregnancy. There are many positive customer testimonials. Thus we believe the product may indeed work. While there is not enough scientific evidence, goat's rue, the active ingredient in the formula, has been used for centuries in increasing lactation. In our view, mothers should consult a specialist before taking Motherlove Goat's Rue Capsules, as the product's potential adverse effects and efficiency have not sufficiently well researched by scientists.