Ginkgo WildCrafted has been presented as a liquid dietary supplement that was created in order to aid its users by providing circulatory support, as well as memory support.

The manufacturing business is called L.A. Naturals and is a business situated in New Mexico, United States and was founded in 2006. This company is currently specialized in the development and manufacturing of liquid herbal extracts. All their formula are made with the help of a specialist in herbal extracts that is a medical doctor with more than 30 years of experience and thousands of patients. Their formulas are made in facilities that adhere to the FDA manufacturing procedures that involve dietary supplements, this ensuring the high quality and potency of their products. The herbal ingredients that are used in their products are custom picked by professional botanists and are the freshest and most vital raw materials that are available.

The herb used in Ginkgo WildCrafted has an organically certified source had presents no traces of pesticides and was transformed in the form of a tincture, this way providing a better potency and is more bioavailable. Ginkgo WildCrafted is a health product suitable for vegetarians and is presented as having an effect that is 40 faster that pills.

Ginkgo WildCraftedis an herbal based one and is based on the healing powers on an ancient plant called Ginkgo Biloba.

Ginkgo Biloba is the sole active ingredient present in Ginkgo WildCrafted and is presented as being an herb with leaves that are commonly used for their healing capacities in order to make medicine. The knowledge of traditional cultures and the modern scientific facts, both point out that this ingredient has a positive effect on the nervous system, as well as on the circulatory one. The use of this plant has been associated with an improvement in blood flow to the brain and it is also said to provide and antioxidant effect as well. Scientific studies have concluded that this ingredient is involved in the boosting of memory and cognitive speed and can also provide help with conditions like dementia or Alzheimer’s disease; it was also indicated that this plant can regulate poor blood flow in the body. Other general health conditions that can be managed with this herb are glaucoma, macular degeneration, or diabetic eye disease. Pregnant women are not advised to use this ingredient because it might cause harm to the pregnancy.

3) Is Ginkgo WildCrafted Right for You?

Ginkgo WildCrafted is an herbal dietary supplement that is based on the healing capacities of a plant that is called Ginkgo Biloba.

Ginkgo Biloba is the only active ingredient that can be found in this product and is a herb from which the leaves are used to make extracts that have medical applications. It is considered that this plant plays a role in the health of the nervous system; both traditional use and modern science tend to back up this claim. The effect of this plant is of improving the blood flow to the brain, and it also acts as an antioxidant; several studies have indicated that this plant can boost memory and cognitive speed in healthy people, and also Alzheimer’s disease or dementia. This plant also provides a series or health benefits that regard the circulatory system and tend to help with conditions like poor blood flow in the body. Some people also say this ingredient is effective in dealing with glaucoma, diabetic eye disease, or even macular degeneration. There have been a series of side effects reported, such as dizziness, constipation, upset stomach, or forceful heartbeat. Use during pregnancy is considered to be unsafe and can cause problems; there are also some condition in which consumption is also not advised, like diabetes, seizures, bleeding disorders, infertility, or if planning on having surgery.

There are online testimonials about this supplement. What is being said includes the following:

This product has an affordable price, but it can vary because the manufacturer only sells its products through retailers, this also means that there is no free trials or money back guarantees available. This formula comes in the form of a one-ounce bottle that was designed to provide a one-month supply. The manufacturer recommends that that dosage should be of 30 to 60 drops in water or juice, two or three times per day; it is advised to shake well before using. The online retailers that present this formula can also provide other similar dietary supplements that have the same desired effects.

This health product is available in form of a one ounce bottle that comes with a dropper as to make precise dosing easy, the recommended dosage is of 30 to 60 drops of formula in water of juice.

8) Our Final Take On Ginkgo WildCrafted

Ginkgo WildCrafted is a natural herbal dietary supplement available in liquid form and aims to support both the nervous and circulatory system. The core ingredient is a plant that does not come from a GMO source does not also have any traces of pesticides or other toxic substances. The quality of each batch of formula is provided by the up to FDA standards manufacturing facilities and the natural source of ingredients used. Because the manufacturer does not directly sell this product it can be purchased through a range of online retailers, thus the price can vary for both the supplement as well as shipping. 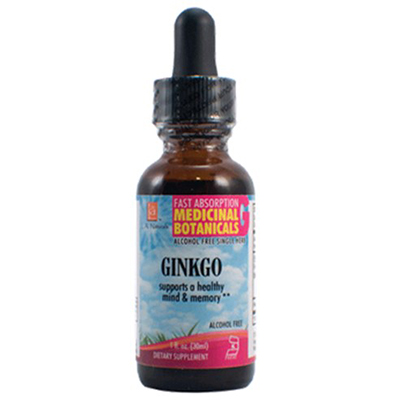 clear
Q:
What are the Ginkgo WildCrafted ingredients?
A:

Q:
Ginkgo WildCrafted is all about what?
A:

Ginkgo WildCrafted is a dietary supplement that supports the health of the nervous and circulatory system and comes in the form of a liquid herbal extract. The company that is responsible for the development and manufacturing of this product is called L.A. Naturals and is situated in New Mexico, United States. This product is based on one active ingredient that is an herb called Ginkgo Biloba, which is known for its benefits regarding memory as well blood flow.

Q:
Does Ginkgo WildCrafted work?
A:

Ginkgo WildCrafted is a liquid herbal extract that has been produced using certified organic ingredients that have no traces of pesticides or a GMO source. Also the manufacturing facilities are up to the highest standards and ensure the quality of each formula. The price is quite affordable, but there is no free trials or money back guarantees because the manufacturer does not directly sell this product. Each bottle has one ounce and comes with a dropper to have a precise dosing method, and at the recommended dosage one container is said to provide a month's supply of formula.

I used other Ginkgo Biloba supplements, but this liquid form is really effective!