Green Tea is advertised as a Green Tea herbal supplement designed to assist with weight loss management, boost the body’s antioxidant capacity and promote healthy aging processes. According to the manufacturing company Fusion Health, Green Tea is an ancient Chinese remedy recognized for a variety of health-enhancing benefits. Secondary potential benefits of the formulation include detoxification, stress relieving properties, skin health, as well as digestive tract and liver benefits.

The company behind the supplement is called Fusion Health, and it is an Australian-based business. The company manufactures and markets over 50 different formulations, targeted to assist with specific conditions including menopause, digestive tract, memory problems, constipation, colds and flues, and many others. According to the manufacturer, the manufacturing facilities comply with the guidelines set forth by the Australian Therapeutic Goods Administration (TGA). Fusion Health claims to design and manufacture formulas which integrate both Western and Chinese medicinal principles, and to obtain scientifically validated products. Additionally, the company claims their products are periodically tested for quality and potency at all stages of the production process.

Available in the form of tablets, Green Tea is able to provide in each tablet the equivalent of three cups of quality Green Tea, but with less caffeine (5mg/tablet).

1) Green Tea at a Glance

Green Tea is a mixture of herbal extracts, and advertised to be free of most common allergens, colorings, flavors, and preservatives. During recent years, the medicinal benefits have been scientifically investigated in order to demonstrate centuries-old presumed health-enhancing properties.

Research has hence discovered that most properties of Green Tea can be attributed to two classes of active constituents: the Flavonoids and the Catechins. Flavonoids and Catechins are potent plant-derived antioxidants. Green Tea is one of the best sources of Catechins, which have been proven to be more potent in terms of antioxidant activity than Vitamin C and Vitamin E.

Several studies have revealed potential associations between regular consumption of Green Tea and reduced risk for several types of cancer (skin, breast, colon, esophageal, and lungs).The plant also contains a class of substances called polyphenols which too have been touted for benefits against cardiovascular disease, several types of cancer, and inflammatory diseases.

One of the most popular uses of Green Tea is in weight loss management, due to its ability to boost metabolism and increase energy levels. Studies however have looked into how much Green Tea would be required to determine significant weight loss. The answer is 8-10 cups a day, which is not advisable. Instead specialists recommend you complement your diet and Green Tea drinking with physical exercise for optimum results.

Green Tea is essentially a pill made from extracts of Camellia sinensis. Green Tea has been a popular beverage for more than 2000 years. Back then, it was mostly used in Asia, where the green tea plant originates from. Only recently have scientists discovered the health-sustaining properties of this herb, properties that appear to have been known to ancient people.

Today, you can buy capsules or tablets of Camellia sinensis, if you do not like the taste of green tea. It appears that this herb does not lose its therapeutic properties when it is included in dietary supplements. Numerous studies have been made to determine the effects of green tea on the human body. Firstly, green tea can enhance the body’s antioxidant network as it is rich in EGCG (epigallo-catechin-3-O-gallate) which is a very powerful antioxidant. Besides protecting the cells against the action of free radicals, green tea extracts appear to prevent the development of certain forms of cancer.

According to one study conducted by the University of California, green tea can support the cardiovascular system as it helps lower cholesterol levels or maintains them within the normal range. Even though green tea contains high amounts of caffeine, it appears to prevent the formation of clots inside arteries, unlike the caffeine from coffee than remains tied to the oil from the beans. This plant is also widely used in weight loss pills because it helps lower appetite.

For normal usage, take one tablet daily or as professionally advised. If you are using the product for weight management, you should take one tablet after meals, 1-3 times daily.

5) What You Need to Know Before Taking Green Tea

6) How Much Does Green Tea Cost?

Green Tea is a relatively expensive supplement. Although it is available in containers of different sizes, the cost per unit remains very high.

It can be acquired at various prices from numerous retailers, both online and offline. The manufacturer also sells it directly via their website. Discounts and money-back guarantees may be offered.

The recommended dosage of Green Tea is 1 tablet daily. If the formula is taken for weight management purposes, the manufacturer recommends taking 2 tablets a day, after meals. The manufacturer warns that if symptoms persist, a healthcare professional should be consulted.

Drinking Tea for medicinal purposes is a popular, traditional practice in many countries. Scientific research has been looking into the benefits of Green Tea and discovered certain associations between its consumption and certain conditions. Green Tea is above all a potent antioxidant and its benefits mainly derive from this. Green Tea is different from most competitor products in that it comes in the form of low caffeine tablets. Although the supplement has not been scientifically researched, there is great probability that it will work to achieve the wanted results. Please be aware that Green Tea is a dietary supplement, and you should talk to a healthcare specialist prior to using it. 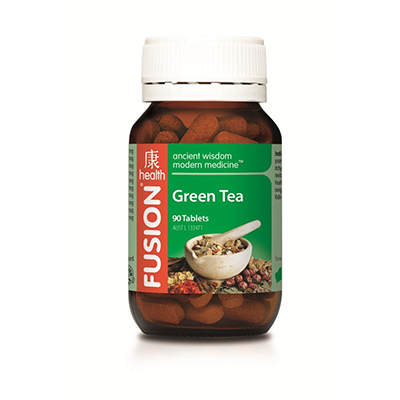 clear
Q:
What are the active ingrediens in Green Tea?
A:

Green Tea is an herbal dietary supplement designed to promote the benefits of Green Tea. Particularly, the manufacturer Fusion Health advertises the supplement to assist with weight management, promote healthy aging, and provide strong antioxidant support for the entire body. Green tea's main medicinal benefits have been the topic of research over the past decades. Findings link green Tea consumption to lower risk of certain cancers (bladder, esophageal, etc), weight loss, memory and cognitive function improvements, lower cholesterol, and other uses. Green Tea is free of artificial ingredients and most common allergens.

One should benefit from taking Green Tea. Natural tea made from this herb is known to address a wide range of medical problems besides effectively aiding in weight management. Combined with physical exercise, a balanced diet, and healthy lifestyle, this formula should be able to help with fat loss, including belly fat.

However, this formula is rather expensive. There are other cheaper, similar products available on the market but their quality may also be significantly lower.

These are great for energy and appetite curbing! I take one each morning, with breakfast. It’s a good alternative to tea infusions, which I don’t always have the time for.