Ginkgo Biloba is an herbal supplement based on a standardized extract of Ginkgo Biloba. The manufacturer, a company called Freeda, claims the product will primarily help enhance and improve memory. Other benefits of the formula derive from Ginkgo Biloba’s powerful anti-oxidation and circulatory promoting properties (potential aid in treatment of tinnitus and maintaining heart health).

Freeda has been manufacturing vitamins and nutritional supplements for more than 83 years. The company is established in New York and markets a variety of product designed to meet the needs of the community at large as well as of specific groups of consumers such as vegetarians, celiac, and kosher consumers and diabetics.

Ginkgo Biloba is recommended for adult use only. People taking any kind of prescription medication are advised to consult a physician prior to use.

Ginkgo Biloba is based on the standardized extract of Ginkgo Biloba. The formula is free of gluten, yeast, lactose, gelatin, animal derivatives, artificial colors, flavors, sugar and starch.

The standardized Ginkgo Biloba extract contains two fractions of the active components ginkgo flavoneglycosides (24%) and terpene lactones (6%), two of the more than 40 chemical compounds found in the Ginkgo leaf. Although their individual effects are not sufficiently known, these compounds have been established to regulate blood flow to the brain as well as peripheral blood flow (legs, arms) and control levels of important brain neurotransmitters, thus helping fight conditions such as memory loss, depression and age related mental impairment.

Preliminary research still inconclusive, even showed small improvements in brain functions, particularly memory, in patients with age associated memory impairment diseases (such as Alzheimer’s and dementia). Side effects of Ginkgo Biloba are rare and include headache and dizziness.

2) What Are Ginkgo Biloba Ingredients?

Ginkgo Biloba supplements are usually used as memory and concentration enhancers. However, products containing Ginkgo Biloba extracts are known to be part of the treatment being used in cases of Alzheimer’s disease and dementia, although its Effectiveness has not yet been proven.

The largest and longest independent clinical trial conducted by JAMA (Journal of the American Medical Association) regarding the efficacy of Ginkgo Biloba found that the supplement does not reduce the incidence of all-cause dementia or Alzheimer’s disease in adults of 75 years or older who had normal or mild cognitive impairments. However, a similar trial published in the International Journal of Geriatric Psychiatry concluded that supplements containing Ginkgo Biloba were significantly superior to placebo in the treatment of patients who have dementia with neuropsychiatric symptoms. Thus it’s safe to say that studies regarding the Effectiveness of Ginkgo Biloba differ. One study suggests that Ginkgo Biloba’s effect on cognition may be attributable to its inhibitory effect on norepinephrine reuptake.

Supplements containing Ginkgo Biloba extracts have been studied as a potential treatment for sexual dysfunction but failed to show any Effectiveness in placebo-controlled trials. However, some reports supported by clinical data prove that they might be if included in the treatment for cerebrovascular insufficiency (insufficient blood flow to the brain), a condition that may manifest itself through memory deficiency, disturbed concentration or headaches.

Due to its property as an anti-coagulant, supplements containing Ginkgo Biloba extracts are not recommended for individuals suffering from blood circulation disorders and those taking anticoagulants such as ibuprofen, aspirin or warfarin. However, recent studies have found that Ginkgo Biloba has little or no effect on the anticoagulant properties of pharmaceutical products in healthy subjects.

5) Precautions of Ginkgo Biloba Use

6) How Much Does Ginkgo Biloba Cost?

There are no consumer reviews available online that we could find. The manufacturer mentions no potential Ginkgo Biloba side effects. The recommended dosage is 1 tablet per day.

The marketed benefits of Ginkgo Biloba are increased and enhanced memory, however the health benefits of ginkgo Biloba extend onto many other areas of human health: increasing blood flow (hence helping treat a variety of conditions that affect blood vessels, circulatory system, brain and limbs, aiding with hearing problems caused by poor circulation), free radical inhibition and mood enhancement. Extensive research is available on Ginkgo, as it is one of the best selling herbal extracts in the US today.

The formula is likely to work, and because it uses a standardized extract, it can also be considered safe. Ginkgo is known to interfere with anti-coagulants; therefore, we stand by the manufacturer’s advice to seek a healthcare provider before use if you are on any kind of medication. 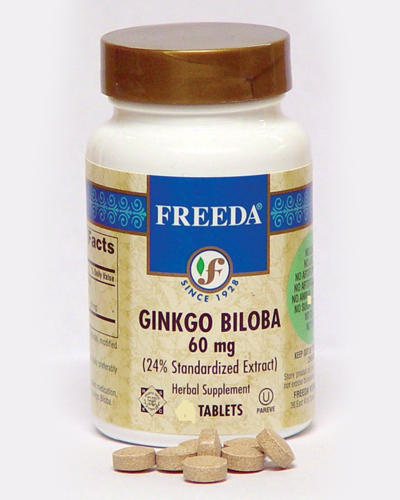 clear
Q:
What does Ginkgo Biloba contain?
A:

Q:
What is Ginkgo Biloba supplement?
A:

Many people have found success when using products containing Ginkgo Biloba extracts to help improve memory. However, Ginkgo Biloba is used in a great number of products and has become a popular ingredient in brain supplements. The formula varies depending on the product, and some might not experience the same result as others.

Taking these pills since two weeks ago… results are slight to unnoticeable… hoping to improve soon.