Primaforce provides consumers all around the world with formulations designed to improve the overall health. Their range of products also includes products designed for weight loss, appetite suppressants, muscle mass increase formulas and a variety of amino acids and proteins. These are claimed to be high-quality researched and clinically proven effective products, although clear scientific evidence is not provided to the public.

Citrulline Malate is suited for athletes and sports enthusiasts who are looking to build-up endurance and to be assisted during recovery processes.

1) What is Citrulline Malate?

Citrulline Malate is a salt form of the amino acid Citrulline, which promotes energy and assists with the immune system function. The Malate or Malic Acid is usually found in fruits such as apples and enhances the effects of Citrulline. Malate has been shown to take part in aerobic cellular respiration (where oxygen is used to produce energy) as well as to condition the recycling of lactate and pyruvate, thus promoting efficient energy production and protecting muscles from fatigue.

3) What Does Citrulline Malate Do?

This product had an amino acid-base and was made using just one active ingredient.

Citrulline Malate is an amino acid that can also be found as L-citrulline, being a naturally occurring substance in the body. It can also be obtained from foods like watermelons. This ingredient is said to have immediate effects in clearing endotoxins found in the body and in promoting energy. A study conducted on 41 men who performed pectoral training sessions has shown a significant increase in endurance and a significant decrease of muscle soreness when a supplement featuring this amino acid was used. Other therapeutic uses have been linked to this amino acid, including conditions like Alzheimer’s disease, dementia, erectile dysfunction, fatigue, diabetes, and high blood pressure. The use of this amino acid does not cause serious side effects, but stomach discomfort has sometimes been mentioned as a side effect.

The suggested use for this formula is of one to three scoops of powder before, during, as well as after training.

There are online testimonials about Citrulline Malate. What is being said includes: I love this stuff, it gets the blood flowing and increases the endurance. This is enough for 25 workouts at the recommended dose making this super cost efficient/ It’s a phenomenal product with science to back it up besides just personal experience.

This product can be purchased at a medium, affordable price from several online and physical retailers, while the manufacturer does not offer direct purchase. This formula comes in a container that provides 200 grams of powder, which can last up to three months if just one scoop is used per day. Being a product that is sold through a retailer network, we advise doing some research as to find the best possible deal, both regarding product price as well as for shipping costs.

7) How to Use Citrulline Malate

Overdose of this substance may cause stomach cramps, bloating and stomach ache. The manufacturer recommends using 1 to 3 scoops of the formula taken before, during and after training. Consumers who reviewed Citrulline Malate claim it is effective and report no side effects.

Citrulline Malate is a dietary supplement formulated for people who work out or athletes who require enhanced endurance capacity and extra help during the recovery stage. The primary ingredient is a popular ingredient in sports nutrition formulas, being considered safe for most consumers. Mild side effects usually occur in case of overdose. Citrulline Malatereviews are positive in general, with consumers reporting high satisfaction with the results of using the supplement.

The formula comes in the form of powder, therefore it is easily dissolvable and to administrate. All in all, it is safe to assume that this is a good quality product. We do however recommend that you talk to a healthcare provider or a pharmacist before use, so that an potential unwanted effects are avoided. 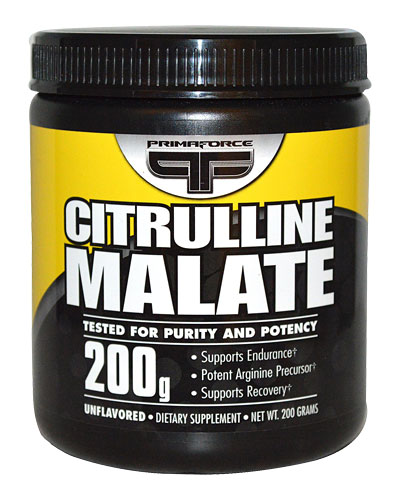 clear
Q:
What are the core ingredients in Citrulline Malate?
A:

Q:
What is Citrulline Malate?
A:

Citrulline Malate is a dietary supplement advertised to support athletic endurance, physical performance and other parameters required by a successful workout session. This formula was developed and is manufactured by Primaforce, a United States based business.

The product is made using Citrulline Malate, which is a naturally occurring amino acid involved in energy production processes and muscle mass growth. It is known to support increased blood flow and amino-acid delivery to skeletal muscle to the benefit of the physical exercise capacity. The main ingredient is also claimed to provide a cleansing effect, helping to eliminate endo-toxins, although here research is still incipient. This formula is designed to address the needs of athletes and bodybuilders over the age of 18. The manufacturer offers little information regarding potential drug interactions and side effects; nonetheless, Citrulline Malate is known as a generally safe formula.

Q:
Are Citrulline Malate benefits actually a reality?
A:

Citrulline Malate appears to be an effective and affordable dietary supplement for those who want enhanced physical endurance. It is made using an active ingredient with proven value for athletes and bodybuilders, being studied and concluded effective in sustaining endurance, muscle mass gain, and energy levels. The manufacturer is specialized in bodybuilding and weight loss product, being quite well respected. This formula is considered safe but is only destined for the use of people over 18. The manufacturer also suggests a medical consult before use if suffering from any conditions or if taking any prescription medication.

I am an amateur runner, I have been competing in local races for 10 years now and I never even reached the top 10, but since I started using this formula, I feel more energized than ever, I now feel that I can win a race.

I started working out two years ago, but just started using this formula three months ago. I used several other supplements, but none that supported both energy as well as development. Since I started taking this I felt a significant increase in repetitions and the cooling down period is shorter, no more muscle aches.