Brahmi 6000 is a formula designed to support healthy memory. Particularly, it is advertised as a product designed to improve memory related problems caused by nervous anxiety and daily stress factors.This supplement is offered by Nutra Life, a New Zeeland based company established in the mid ’80s. The company began as a sports nutrition supplements manufacturer, and extended their product line to other nutritional supplements.

Brahmi 6000 is a combination of ingredients such as Bacopa Monnieri (Brahmi), Lecithin and vitamins which support a healthy cognitive function and prevent the negative effects oxidation processes have on the brain.

Brahmi 6000 is an herbal and vitamin based supplement.The main ingredient is Bacopa Monnieri or Brahmi, a herb originated in India and traditionally used as an anti-anxiety treatment and for improving poor memory.

Several clinical trials and concluded that Bacopa Monnieri has positive effects on the capacity of retaining new information. However, it has been shown to have several side-effects such as slowing the heart rate, worsen ulcers and lung conditions (by increasing secretion of fluids) and causing gastrointestinal tract blockage.

Nutra Life’s formula contains the equivalent of 6000 mg of dried Brahmi. Even though the manufacturer does not provide any clinical testing results, the product has received good reviews from consumers.

2) Details on Brahmi 6000 Ingredients and Uses

Standardized as a product that maintains a strong memory during stressful periods, Brahmi 600 contains herbal ingredients. Among these, there is Bacopa Monniera. Known also as Brahmi, Bacopa can be found naturally in India and has been used for a long time in the Ayurvedic medicine tradition for the treatment of various disorders, specifically those involving anxiety and intellect issues. Research has shown that this plant contains active compounds such as alkaloids and saponins. Reported side-effects include headaches and fainting.

Another component of Brahmi 6000 is Crataegus laevigata, a type of hawthorn that grows in western and central Europe. It has been used for treating heart attacks as well as high blood pressure. Potential unwanted side-effects are nausea, stomach upset, drowsiness, sweating and sleeping troubles. If any of this occur, it is important that the usage of the remedy is immediately stopped.

There are few online testimonials regarding the Effectiveness of this product, but the majority claimed that the specifications on the labels are accurate and the product has proven effective.

Brahmi 6000 is a moderately priced supplement. It is sold by bottles containing 50 capsules that should be enough for a 50-day treatment. The product is found for purchase on manufacturer website as well as some other online retailers.

Brahmi 6000 is designed only for the use of adults. The suggested dose is 1 capsule daily or as directed by a healthcare professional. There are some precautions to be taken in consideration by people under prescription drugs, taking blood-thinning medicine or suffering from stomach related conditions.

Brahmi 6000 is a nutritional supplement consisting of a blend of commonly used herbs and vitamins within products with similar ailment claims such as this. It is designed as an anti-anxiety and cognitive function support for adults (including students). In the case of students, for optimal results, the formula is recommended 4 weeks before the exams or a similarly demanding period.

Like most of the nutritional supplements, Brahmi 6000 is not FDA approved, but it is claimed as manufactured in compliance with GMP regulation, under strict quality-assurance programs and using only ingredients from approved suppliers.Because the herbal active ingredients can cause some side-effects, the formula is recommended to be taken only after a consult with an informed healthcare professional. 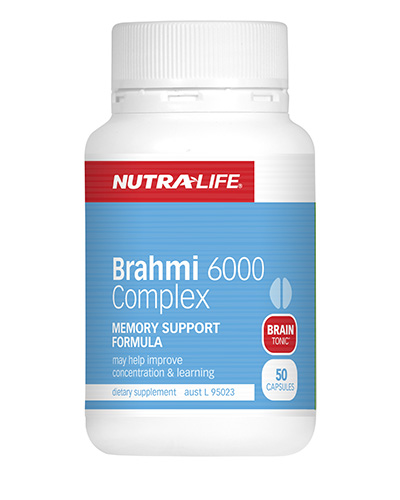 Q:
Are Brahmi 6000 benefits actually a reality?
A:

Overall, a remedy that supposedly maintains a healthy memory within stressful periods, Brahmi 6000 contains a blend of herbs in combination with Vitamin B6. It is recommended especially for times of added mental pressure as well as for lowering the effects of stress and anxiety.

There are some reported side-effects, and if any occurs, people should stop its consumption. There isn't sufficient online information regarding its Effectiveness, but considering the fact that this is a supplement, to obtain proper results, the treatment should be combined with a healthy lifestyle.