Botanic Choice Noni Fruit Review – 8 Things You May Not Know

Noni Fruit is promoted as a natural supplement that seeks to improve aspects of the immune system while also easing the digestive cleansing processes. In addition, it should enhance energy, thus also positively influencing the moods of individuals taking it. The business responsible for the apparition of this product goes by the name of Botanic Choice.

With an impressive background on the nutritional market, this company was established by Joseph E. Meyer in the year 1910 and since then designed a wide palette of nutritional supplements that were made using natural sources. These remedies desire to enhance either the organism as a whole or specific organs or functions. Moreover, since 1990, they began to specialize on some of the modern issues, such as women’s health and weight management.

This formula is based a fruit that has been utilized by Pacific Islanders for more than two thousands of years, and it is generally known as a part of some healthy beverages. With thirty milligrams of powder per serving, Noni Fruitis meant for people that desire to boost their immune system or began noticing the negative effects of aging and their impact upon social life and time spent with the family.

1) Noni Fruit at a Glance

Meant as an immunity booster and a mood enhancer, Noni Fruitrelies on a single ingredient which has been consumed for centuries by some individuals. Its scientific name is Morinda citrifolia, but it has a lot of names, depending on the region of growth.

Research showed that this fruit originates from Southeast Asia and it grows in an evergreen shrub. Even though it is edible in its raw form, because it has a nasty taste most of the people prefer its usage in other forms such as capsules or powder.One of the reasons for the properties of this ingredient it’s the amount of Vitamin C, B, and beta-carotene contained. There are even sources which point out its demand for lot of issues that vary from minor injuries to life-threatening diseases. Among its main uses, there are heart conditions, headaches, arthritis, senility, cancer, as well as digestion. On the other hand, the possibility of its usage is still under research and there may be other problems whose symptoms may be lowered.

2) What Are Noni Fruit Ingredients?

3) What Does Noni Fruit Do?

Desiring to boost immunity levels while also enhancing mood and providing a daily support for the damage done by free radicals in the organism, Noni Fruit is based on a single ingredient that has been used for centuries by some people. It is known by different names, depending on the region, and its scientific name is Morinda citrifolia.

Research revealed that this fruit is native to Southeast Asia and it grows in an evergreen shrub. Although it is edible in raw form, because it has a nasty taste, most of the individuals prefer its consumption in other ways. One of the reasons behind the qualities of this ingredient is the quantity of vitamin C contained. Some sources point out the fact that it is in demand for a lot of problems that range from minor injuries to life-threatening diseases. Among its main usages, there are diabetes, arthritis, headaches, heart conditions, senility, cancer, and digestion. However, the possibility of its influence is still being explored, and other conditions may be positively affected in the future through its utilization.

Even though it is viewed as safe in most situations, one of the most common side effects is constipation. Furthermore, people with diabetes should consult a personal doctor before the beginning of the treatment.

Sold by bottles containing thirty capsules, this remedy can be taken on a daily basis. The recommended dosage is of one capsule per day, with water. Therefore, a bottle is enough to last for a month. Overall, the price is viewed as affordable, and because there is an auto refill program for people who want to buy it on a regular basis, it can even be regarded as cheap. Although the manufacturers mostly sell on a national scale, an international shipment is also included if not directly from their official website, through some distributors. Some additional promotions and discounts may make the supplement more affordable throughout the year.

Despite the fact that it is generally regarded as safe, it can cause some side effects such as constipation. Additionally, individuals who suffer from diabetes shouldn’t consume it without asking the advice of a personal doctor.

8) Our Verdict on Noni Fruit

Promoted as a supplement based in powder obtained from a fruit that has been utilized for centuries due to its qualities, Noni Fruit seeks to enhance the mood, immunity, as well as other potential issues which may occur due to bad digestion or an unhealthy lifestyle. Most of the individuals praise its benefits, specifically in a raw form or nutritional supplementation form. Even though it is usually safe, some side effects may appear. Furthermore, there is no specific information linked to the safety on a long-term utilization. People with diabetes that are taking other drugs alongside should consult a personal doctor before taking this treatment. 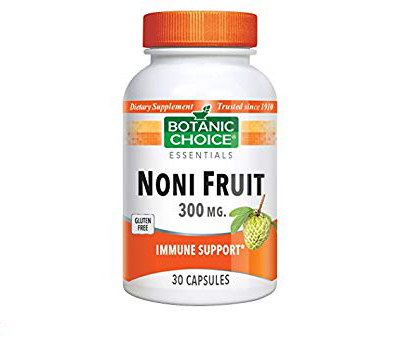 clear
Q:
What are the core ingredients in Botanic Choice Noni Fruit?
A:

Q:
What is Botanic Choice Noni Fruit supplement?
A:

Advertised as an immunity system enhancer as well as an energizer and invigorator of the organism, Noni Fruit is a product based on a single ingredient and provided by a company that has been on the nutritional field for more than one hundred years. Its only ingredient has been used by thousands of years by people due to its composition featuring Vitamins C and B, and beta carotene.

Advertised as a remedy based on an ingredient that has been used for years because of its beneficial properties, Noni Fruit targets the enhancement of mood, immunity, and other potential problems that may appear because of bad digestion or an improper lifestyle. Most of the people praise its effects, particularly in a raw form or nutritional supplementation form. Although it is mainly viewed as safe, some side effects may occur. Additionally, people who have diabetes are advised to consult a personal healthcare provider because if the situation is difficult; they may have to monitor their progression if on this treatment.

I used to drink a lot of Noni juice, but I decided I want a change so I tried this supplement. I must say my headaches are less painful and I can enjoy life better.

With Noni, life is so full of energy and joy! I totally like it!