Grapefruit Seed is presented as a natural supplement which was mainly created to improve immunity, the functioning of the digestive system, and increase the organism’s protection from radical damage for people who take it on a regular basis. Its designed is a business called Botanic Choice.

From its foundation in 1910, it was pretty clear that the main goal is related to nutritional market because its founder has been focusing on this aspect since his early life. Despite the fact that since 1990 they sold mostly herbal bulks, their scientific research and specialization was in the area of plant properties that may enhance certain aspects of a person’s lifestyle. The founder of the business was Joseph Meyer and he made a name for himself due to its increased passion towards nature and its qualities of whom people are generally unaware of.Even though he died, the legacy was maintained through his great grandson and grandson who are trying to constantly increase the quality, innovation, and reliability of their formulas.

Grapefruit Seed contains only one ingredient that actually gives its name. On the other hand, from it, the producer extracted pulp, peel and whole fruit-seeds and the bioflavonoids standardization is between 45 and 50 percent, thus the utilization of Grapefruit Seed isviewed as safe if the amounts aren’t exceeded on a daily basis.

There are plenty of people that believe in the beneficial effects of grapefruit. From consuming it in a natural form to taking supplementation which features it either as a main or additional component, it is one of the most utilized on the nutritional field due to its qualities. Hence, Grapefruit Seedbases its positive effects on the usage of extracts from parts of this fruit.

The most reliable utilization for this ingredient is related to the cardiovascular health. It is believed to help relief symptoms linked to conditions like poor circulation, chronic venous insufficiency, and high cholesterol. In addition, in certain situations, it can help people that suffer from eye diseases caused by diabetes.Another good aspect of this component is the fact that it contains antioxidants that are in fact substances known to help protect cells from damage, thus can help prevent some diseases like infections, flu, and colds. The daily recommended quantity of this extract ranges between 100 and 300 mg.

3) Is Botanic Choice Grapefruit Seed Right for You?

There are a lot of people who believe in the benefits of grapefruit. From eating it on a regular basis to using supplementation that contains it either as a core or additional ingredient, it is one of the most used on the nutritional market because of its properties. Therefore, Grapefruit Seed relies its positive impact on the utilization of extracts obtained from parts of this fruit.

The most important uses for this component are related to the cardiovascular system. It is thought to relief symptoms of conditions such as high cholesterol and poor circulation called chronic venous insufficiency. Additionally, in some situations, it may help individuals who suffer from eye diseases determined by diabetes. Another important aspect of this ingredient is the fact that it features antioxidants which are substances known to protect cells from damage, thus may help prevent diseases such as infections, colds, and flu. The daily suggested intake of this extract varies between one hundred and three hundred milligrams.

Some unwanted side-effects may occur during its usage and include itchy scalp, nausea, headaches, and dizziness. People who have blood diseases or are taking blood thinners or aspirin shouldn’t follow this treatment alongside.

There are online customer testimonials about this product. What is being reported includes:

6) How Much Does Botanic Choice Grapefruit Seed Cost?

Found for purchase either directly from the manufacturer official website or other online distributors, this supplement is regarded as affordable for almost all pockets. It comes in bottles that contain 200 mg distributed in 100 capsules. There is no information regarding the daily suggested intake, but it should be somewhere around three to four capsules per day if the quantity of its only ingredient is taken into account. Furthermore, because of the new auto refill program offered by the company, the shipping costs massively decrease so customers who have decided to follow a treatment on a regular basis may take advantage of it.

There are a series of unwanted side effects which may happen throughout its usage and include itchy scalp, dizziness, headaches, and nausea. Furthermore, people who are taking aspirin, ibuprofen, or blood thinners should consult a personal healthcare provider before the start of its consumption due to potential counteractions.

Advertised as remedy whose antioxidant qualities as well as positive effect on cardiovascular problems are because of its main ingredient, Grapefruit Seed is recommended as alternative medicine for people that started observing the negative effects of aging on their heart and immunity. It represents a natural approach to prescribed medication, but it may also present some potential side-effects, specifically when the daily suggested amounts are overused. The long-term safety the one of nursing or pregnant women is uncertain, thus people should consult a personal doctor if something happens during the treatment. The results are increased by following a healthy lifestyle. 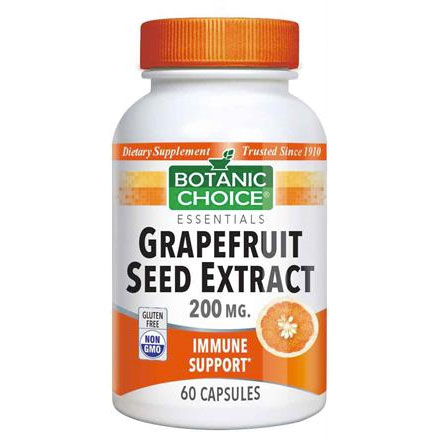 clear
Q:
What are the active ingredients in Botanic Choice Grapefruit Seed?
A:

Q:
What is Botanic Choice Grapefruit Seed?
A:

Grapefruit Seed represents a dietary supplement whose main purpose is to offer protection to the organism by increasing the antioxidant levels. It was designed by a well-known business on the nutritional field. The formula features one ingredient, but with history on the nutritional supplementation medicine due to its positive impact on cardiovascular health, as well as immunity. However, people who are taking blood thinners should consult a doctor before using it.

Presented as a product whose antioxidant properties as well as positive impact on cardiovascular issues are due to its core ingredient, Grapefruit Seed is destined for consumption of people that have either started aging or suffer from physical problems linked to heart, liver, kidneys, or blood sugar levels. It is a natural approach to prescribed medication, but it also comes with some potential side-effects, particularly when the daily recommended amounts are exceeded in an exaggerated way. The long-term safety, as well as one of the women that are pregnant or lactating, isn't known so the advice of a doctor should be suggested in these cases.

I just have to say that since I started taking this, I feel waaay better. I don’t know if this is the case with everybody, but it worked for me !